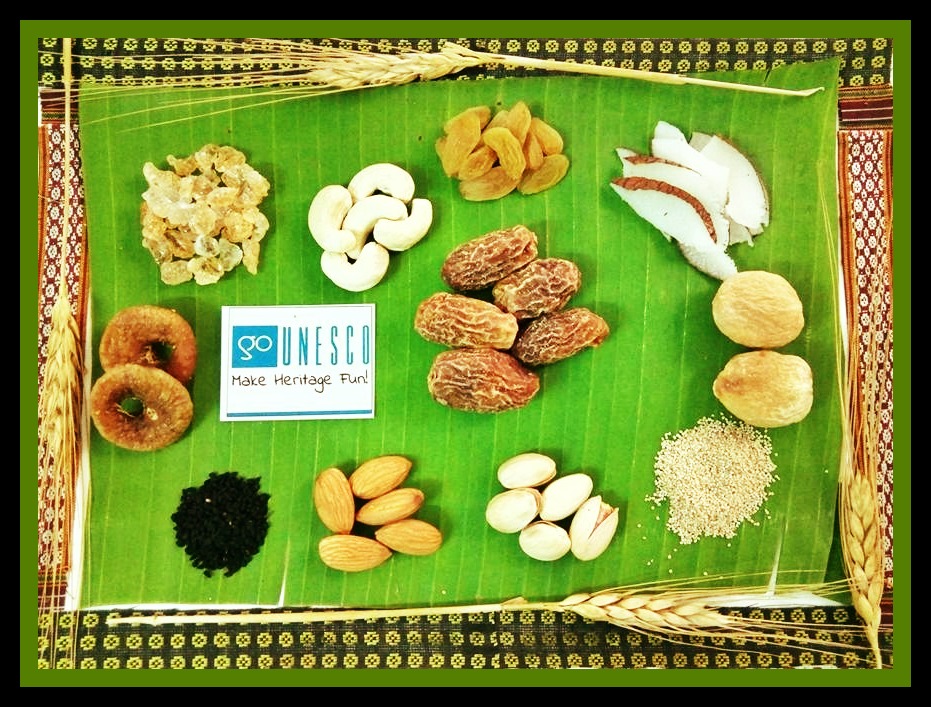 Literally glued together by edible resins, the Antin Undi is a treat for any sweet tooth

Karnataka is the land of black loamy soil. Date cultivation is a recent development in the state. A famous farmer’s festival, Nagpanchami, is celebrated in the month of July. A well known saying states that “Snakes are a farmer’s best friend”. It perfectly captures the essence and purpose of the celebration. During the festival, five types of sweets are prepared with sugarcane and dates as ingredients. The Antin Undi is one of them.

What is the Antin Undi?

Antin Undi is a dessert made from Nuts and Dates, which are glued with natural edible gum. It is a common preparation in the Northern parts of Karnataka. The name “Antin” means edible gum and “Undi” means sweet balls in  Kannada language.

Nuts and dry fruits form the main bulk of the Antin Undi. The cashews, almonds, pistachios, and grapes are grated and roasted in ghee or clarified butter. The aromatic ghee is absorbed by the nuts, dried apricots and figs.

Antu, the natural edible gum, is white or brown in colour. It is nutritious, and warms the body during winter season. The gum is also roasted in ghee and the change of colour and texture is as shown in the picture above. It is a binding agent that keeps the dish together.

Date is the core ingredient of the dessert. Dates can be either fresh or dried. “Uttati” is a Kannada word for dried dates. The dates are de-seeded and finely blended. They have a sticky texture and deep brown colour with a glossy finish. Dates are extremely rich in iron, and are indulgently sweet.

The dates, nuts and gum are mixed well in a platter. A sticky dough is formed which holds all the ingredients together. Ghee is spread gently on the palms and a small piece of the mixture is taken. Slowly a sweet ball, also known as ladoo or undi, is made by rolling the mixture between the palms. The nuts pop-up bright and glossy on the surface of the undi.

The  Undi is one of my favorite local desserts. My grandma makes these quite often at home, and she learnt from her mother. The methods of preparation are thus passed on from generation to generation. The ingredient I picked for this little culinary experiment was the date, and I was elated to have learnt to make something that is so prevalent within the religious context of South India. It’s also really tasty to eat; all the more reason to know how how to prepare it.

Nagpanchami is celebrated by preparing sweet undis and distributing them to family and friends. The making of undi is a family event where the children, mothers and grandmothers join forces in the kitchen. The antin undi is sweet to taste, with a crunchy and rich. The dessert is often accompanied by spicy crunchy Chakli (fried, spiral shaped fritters)  made of whole wheat. Dessert really hits the spot after a good meal. There’s always room for one more Antin Undi!