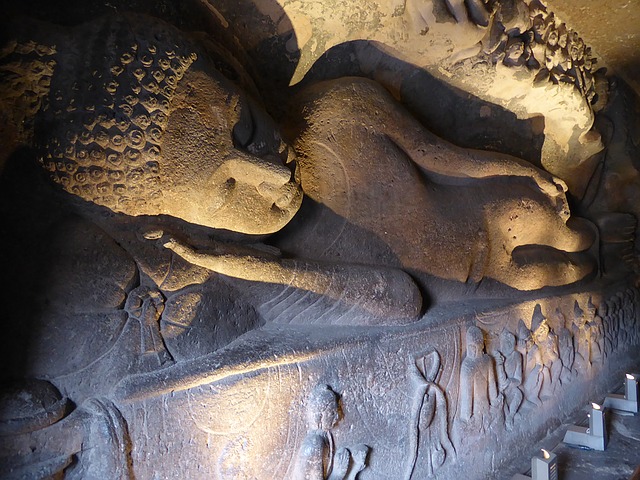 Today, we are going to talk about the Ajanta-Ellora caves, which is a protected monument in the care of the Archaeological Survey of India, and since 1983, it has been a UNESCO World Heritage Site.

Situated in Maharashtra, It’s one of the most popular tourist places in India. India is rich with its cultural heritage and Ajanta-Ellora caves are a fine example of that.

Cultural heritage is the legacy of physical artifacts and intangible attributes of a group or society that is inherited from past generations. Cultural heritage includes tangible heritage such as buildings, monuments, books, landscapes, works of art. Intangible heritage such as folklore, traditions, languages and natural heritage such as biodiversity parks, and landscapes.UNESCO(The united nations educational, scientific and cultural organization), was created 72 years ago to highlight these heritage sites all over the world for the years and generations to come. When a site, be it man-made or natural, is listed as a world heritage site list, it is then legally protected by international treaties under the guidelines of UNESCO.These sites are demarcated by UNESCO as protected zones. And the list of the world heritage sites is maintained by the international World Heritage Program administered by the UNESCO World Heritage Committee, which is composed of 21 states parties & that are elected by their General Assembly.

Ajanta caves have approximately 30 caves. These caves have the most beautiful masterpieces consisting of murals and sculptures that depicts one of the finest works of Buddhist art. In these caves, you’ll see paintings, murals, sculptures that show the previous life of Buddha.

The work done in the Ajanta caves by the ancient Indian artisans is so splendid that it’ll keep you astounded throughout your tour. Made from just a chisel and a hammer, the carvings done in the rocks is a beautiful sight to hold. These caves have around 300 rock-cut Buddhist cave monuments and were found dating back to between the 2nd century BC and 6th century AD.

The main difference between Ajanta and Ellora caves is that Ajanta caves are all about Buddhist art, whereas Ellora caves are a mix of Buddhist, Hindu and Jain culture. You will also see worship halls and ancient monasteries of different traditions in Buddhism religion. There are also murals that depict the past lives and rebirth of Buddha. Glimpses of the Jataka tales, which depicts the past lives of Buddha, in both animal and the human form are also visible. Also, there are murals in which Buddha appears as a king, an outcast, a god, an elephant, etc. The Ajanta Caves were actually “discovered” in 1819 by a colonial British officer Captain John Smith on a tiger-hunting party as they were covered by jungle.

At a distance of 95 Kms from the Ajanta caves, resides the majestic Ellora Caves which is one of the largest monastery-cum-temple excavated from the basalt cliffs in the Charanandri Hills.
Unlike Ajanta Caves which only contributes to the Buddhist art, Ellora Caves features Hindu and Jain culture too along with Buddhist artwork.

There are a total of 100 caves in the Ellora Caves, out of which only 34 caves are open to the public. And out of these 34 caves, there is a division of caves according to culture. From Cave 1-12, Buddhist, from Cave 13-29, Hindu, and from Cave 30-34, Jain, with each religion representing their respective God-Goddess, and mythological legends and stories.

All of these caves were carved during the Hindu empires as the Hindu and Buddhist Caves were built in the time of Rashtrakuta empire, and the Jain Caves were were built during the Yadava empire. These caves were built next to each other and demonstrate the harmony India used to share in religions. Now, the Ellora Caves is famous for many things but the one thing that makes it unique is The Kailasha temple in Cave 16. This temple is the largest monolithic rock in the world. The temple also has sculptures of various deities and mythological legends found in Vaishnavism and Shaktism.

Among the Caves dedicated to Buddhist art, Cave 10 holds the main focus. It consists of a worship hall, known as “Vishvakarma Cave” (meaning the cave of one who achieves everything).
The rock is carved in such a way that it has the appearance of wooden beams, that’s why it is also known as “Carpenter’s Cave”. Beyond the worship hall, there is a tall Stupa, also known as a Chaitya-griha (prayer house). And a 15-foot statue of Buddha presides at the heart of this cave.

Situated in Cave 21, Rameshwar temple includes very interesting carvings. You can find the mythological stories of Goddess Parvati’s pursuit of Lord Shiva, Parvati’s wedding to Lord Shiva, Parvati, and Shiva at leisure, Lord Shiva dancing, and their son Kartikeya is featured in some other caves as well. You will also find the temple of Goddess Shakti here. At the entrance of the cave, you’ll see two large sculptures of the Goddesses Ganga and Yamuna.

At cave 15, you will find another significant monument. There is a sculpture of Lord Vishnu in his ten avatars (because Lord Vishnu had 10 incarnations), which is a major attraction.

At the north end of Ellora are the five Jain caves belonging to the Digambara sect. In these caves, 24 Jinas (mythological legends that have found freedom from the cycle of rebirths) have been depicted in great detail. Also, the main attractions of these Caves are the Indra Sabha and Jaganatha Sabha which depicts the various aspects of Jain religion respectively.

The best time to visit Ajanta Ellora Caves is from June to October, as in that duration you’ll find the weather very pleasant. You might even experience a nice drizzle at the end of May.

Rekha Pandram : Agent of Change bringing back a traditional food

Galle – A taste of colonial past