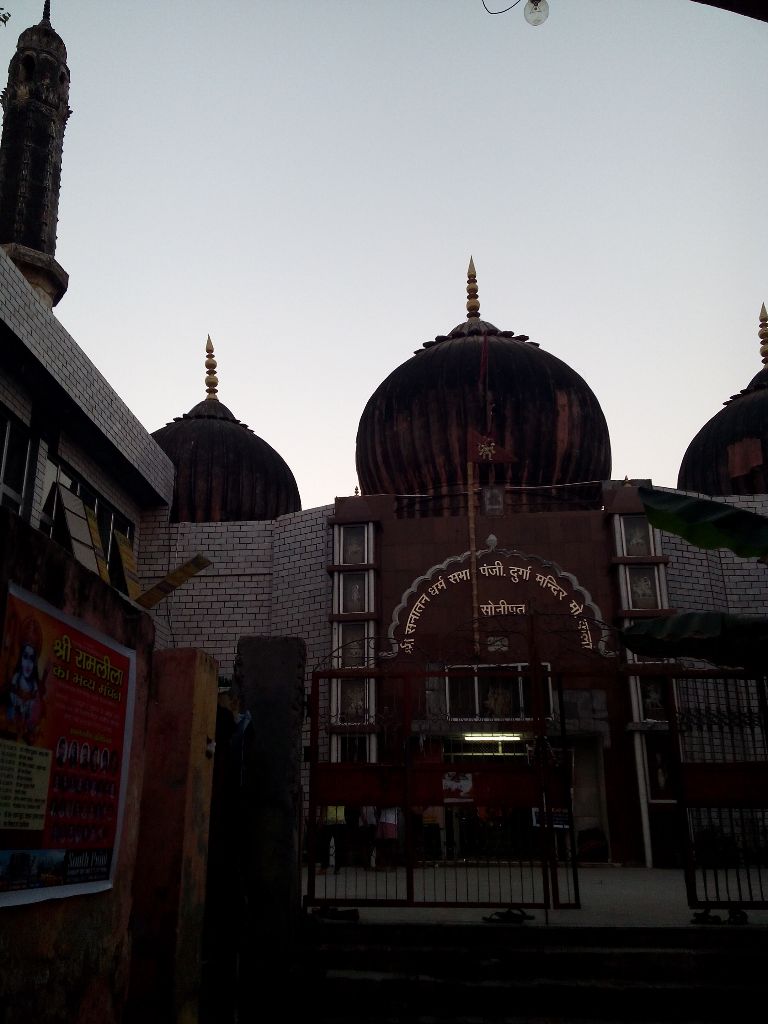 Before starting with the description, firstly i would like to thank GoUNESCO’s team for coming up with this task of ‘exploring the unexplored’. So far,  this task has been the most interesting one and to keep up with the interest i came up with the idea of visiting a rather interesting site, that is, Durga Mandir of Mohalla Kalan, Sonipat (popularly known as badi maszid) which is still popular as badi masjid ( greater mosque). Before reading the article, i would suggest the reader to look upon the pictures to get an idea of this site. Durga mandir is located in one of the oldest residential colonies of Sonipat (Mohalla kalan). Despite of staying nearby this place, i wasn’t really bothered by a mosque look alike temple until i decided to visit this site and unleash its very less known story. The existence of this structure dates back to the time of partition of India-Pakistan. As per old aged residents of area nearby, this structure was originally a mosque and was one of the oldest mosque at that time, but because of the partition a major part of muslim population of this area was replaced by Hindu population and that was the time when people starting replacing it by a temple. Till that time, it was rather a great mosque of Sonipat as the name rightly suggests. But because of a sudden transition caused by the atmosphere of transition and settling up of followers of Hindu religion  in the area and their need for a place for offering prayers and other rituals, establishment of Durga Mandir (Temple of Goddess Durga) started with installment of a small idol of Goddess Durga and a primary school in this building. After a few years, Bhai Khemchand (who was a well known social worker back then) helped local residents to construct a temple inside the building of mosque. But because of lack of funding and no funding from governmental authorities, they only succeeded in transforming the inside of building into a temple. Till the present date, this temple continues to have evident features of a mosque. When one looks from outside, you can see a structure accumulating both a temple and a mosque in it, its a mosque if you only look at the architecture and design but its a temple if you look at the rituals and other practises taking place there.

The tomb like structures still make people call it badi maszid ( greater mosque) and the interior of the structure still resembles the interior of a mosque, the arabic sort of designs on the ceilings speak the story of existence of badi maszid (greater mosque) and the unique symmetry of pillars and the design says it all but the lively statues of Goddess Durga, Krishna and Rama make it a temple and a place of regular visit for local residents. Apart from serving as a temple, this building also serves as a place for free medical check ups on certain days for needy people and also offers a small park for children.

Restoration in Haiti after the 2010 Earthquake