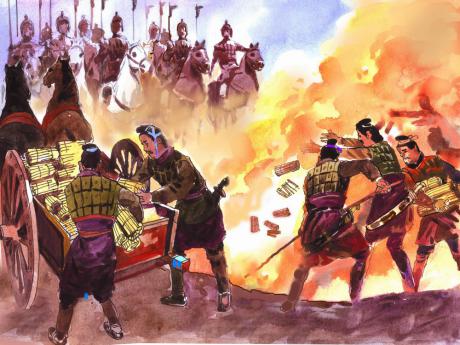 Books, manuscripts and ancient texts have always been an important part of the history of civilization as it stands as a testimony to the events that occurred in the past. It is one of the important mediums for communicating and sharing personal ideas, knowledge, skill and wisdom. It is a tangible form of manifestation of thoughts, philosophies, and ideologies of an individual person to a group of people and society.

Writings are a representation of the lifestyle, system, faiths and belief of society of particular time period. These writings can influence society; therefore, it’s important to know about a brief evolution of written language.

Most of the early writings in the pre-historic era evolved in the form of pictographic representation; for instance, paintings on the caves. It speaks about the subsistence of hunting and gathering culture predominant in the era.

Gradually, the writing system advanced alongside the transition from hunter-gatherer society to a more permanent agrarian society, where it was necessary to count one’s property, land, animals, grain among other things.  The requirement of recording and transferring of knowledge led to the evolution of the writing system, among them is one of the earliest scripts such as papyrus (earliest Egyptian scripts written on dried leaves). The earliest forms of manuscripts are found to be written on leaves and gradually, on paper, and finally, in the form of books; for instance, the recording of the religious faiths and belief system of various cultures. These are important elements of the cultural heritage possessing historical and social value.

Clearly, these writings are a powerful medium, used time and again in the history to influence the process of thinking of a society and its functioning. Thus, society and writing are interdependent on each other as they are governed by events occurring in the society and vice versa.

Historical events prove that destruction of written form i.e. books has been the cause and effect of change of power or demonstration of supremacy over another power. The act of vandalism of books has taken place in past and still continues due to reasons that are political, anti-intellectual or even acts of freedom.

One of the events in history that confirms book burning as a demonstration of power is when the first Chinese Emperor Qin Shi Huang (“Ch’in”), ordered the burning of all books in China in 213 BC. It was used as a tool to control people.

There are several other identical events that took place around the world.

The Isshi Incident in Japan, that intended to destroy the Soga clan, began with the assassination of Soga no Iruka, the son of Soga no Emishi, a statesman in the Asuka Period of Japan. The incident culminated with the destruction of Tennōki, an important historical text written during the Edo period (17-19th century).

Another huge cultural knowledge loss was the burning of The Great library of Alexandria. The Royal Library of Alexandria or Ancient Library of Alexandria in Alexandria, Egypt, was one of the largest and most significant libraries of the ancient world. Many historians and scholars claim that Julius Caesar was responsible for burning down the library, which some believe was carried out by Christians of the 4th century AD.  Others believe that the destruction was carried out during the Muslim conquest of Alexandria; whoever was responsible for carrying out this event let to the destruction of significant cultural heritage. Once again, this shows that burning of scholarly resources was one of the outcomes of the rise and fall of political power.

Similar incidents took place in 1258 where the House of Wisdom was destroyed during the Mongol invasion of Baghdad. This was a major intellectual center for many scholars and readers of that time. This was lost as a result of clashes between two powers.

During the World War I, Germans burnt the Catholic University of Louvain, which was considered one of the largest, oldest and most prominent universities in Belgium. It was founded in 1425 by John IV, The Duke of Brabant. Many books and priceless artifacts were burnt and destroyed at the time. The burning of literature by Nazi Germany in 1933 is well-known. They deliberately burned books that were related to Jewish philosophy and belief system and were an act against the Jewish population. This was a purposeful act of genocide against a particular ethnic group.

During World War II, the Japanese military forces destroyed many Chinese libraries, including libraries at the National University of Tsing Hua, Peking where over 200,000 of 350,000 books were lost while the University Nan-k’ai, T’ien-chin, Institute of Technology of He-pei, and other universities of national importance were completely destroyed. In the same period, the Germans attacked British museum incurring a heavy loss of valuable books.

Another example from India was the destruction of Nalanda University in 1197 AD and Vikramashila University in 1203 AD by Muhammad Ghori. It was a significant event during the end of Buddhism and the beginning of Muslim rule in India.

These instances that book burning event was used as a tool to destroy the existing social and political condition.

This unfortunate practice continues till date. In 2011, Libyan leader Muammar Gaddafi’s Green Book was burnt by extremist groups. Another similar event was the destruction of several historical books and manuscripts of Mosul libraries by the extremist group, ISIS in Syria.

The above-stated examples explicate that the destruction of books and literature during the times of political conflict within countries or groups is a powerful tool for controlling and manipulating a nation. The consequence is a loss of cultural heritage evident of a nation’s history, and call for an immediate need to find a way to protect them.