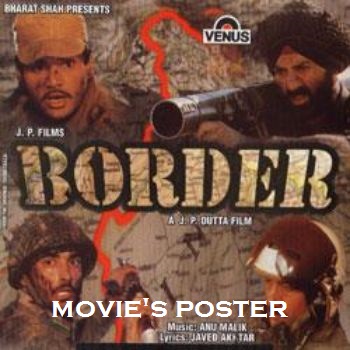 BORDER- THE MOVIE OF INDIAN SOLDIERS

There are not many movies that depict the war scenarios, soldier’s struggle, difficult and challenging situations of the brave soldiers. Border is one of those epic movies directed by J.P. Dutta, that completely show cases the events of the 1971 war. As the name suggests, the movie demonstrates the conditions at the border of India and Pakistan.

The movie is more focused on the efforts of an Indian army regiment of just 120 soldiers that took on the army of 2000 Pakistan soldiers which were filled with top tanks and ammunition. The Indian soldiers fought bravely with the Pakistani soldiers and managed to keep fighting against them till it was morning. In the morning the Indian Air force took charge. Even the Indian Air Force is shown to appreciate the efforts of Indian Army.

The movie actors are Bollywood actors, who with their terrific acting skills have impressed a lot of people in India. The actors with their strong acting made the crowd completely get the feel of what’s there at the border. The star cast included Sunny Deol, Akshaye Khanna, Sunil Shetty, Jackie Shroff and many more prominent actors. One of the best dialogue of the movie is “ Hum he hum hain toh kya hum hain, tum he tum ho toh kya tum ho”, this means that if there is only you or only me life will not be fruitful.

The hero of the movie was Sunny deol playing the role Major Kuldip Singh, who encourages and leads the 120 Indian soldiers to fight against the 2000 Pakistani soldiers. This awesome production by J.P. Dutta made many-many young Indians join the defense forces. The main reason of such film is to encourage the youth by showing the awesome life of the soldiers.

A Year on the High Plateau / Many Wars Ago