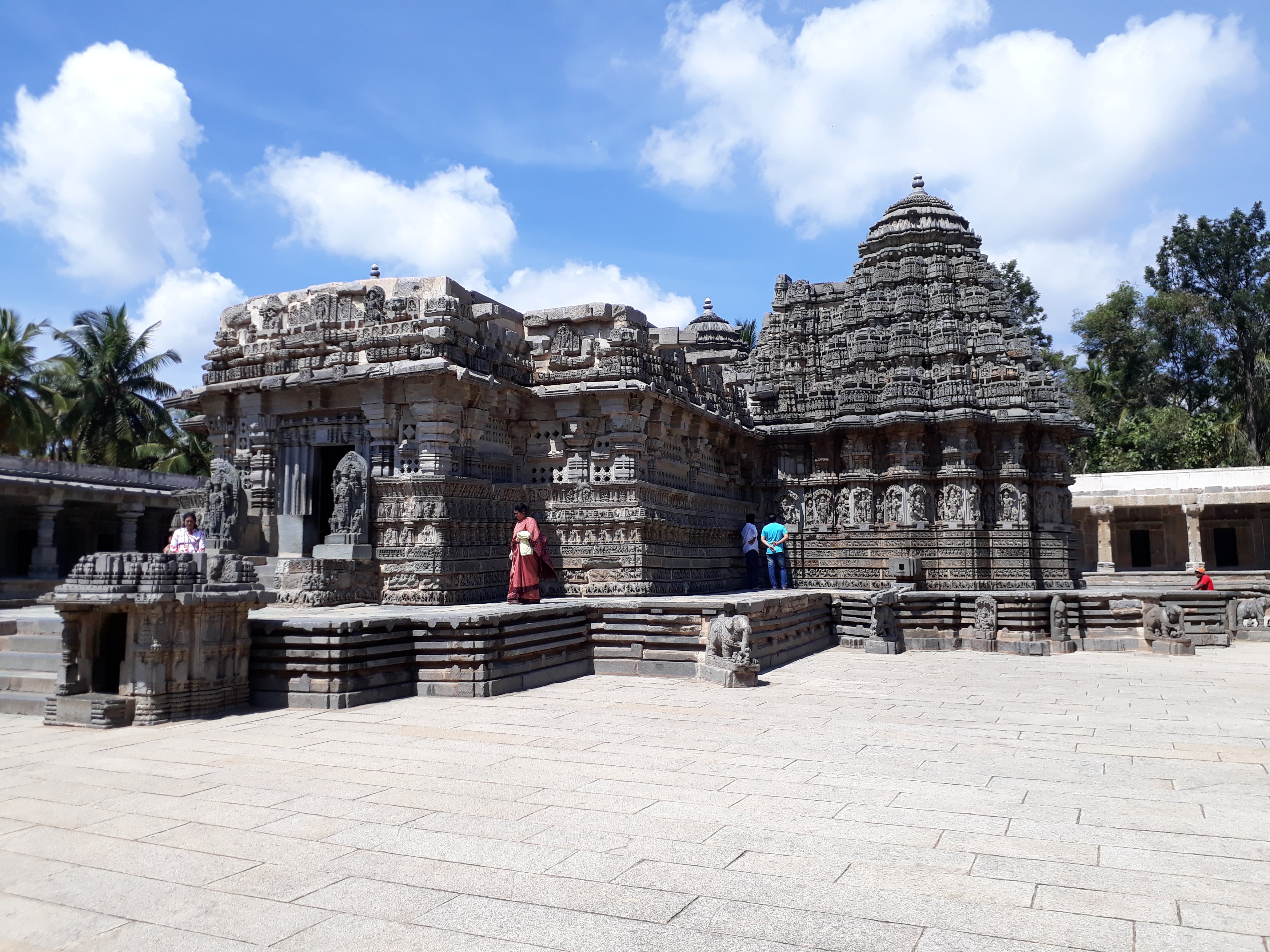 Mysore is a busy tourist destination in the heart of the Indian state of Karnataka. Every year thousands of tourists flock there, to see the Royal palaces, taste the delicious local food and enjoy the pleasant weather, that make it an ideal place to spend some quality time. But most tourists do not realize that this place has much more to offer. Just 38 km from the city center, in a sleepy little village called Somnathpura, lies the magnificent Chennakesava temple, a masterpiece of ancient Indian temple architecture. Dedicated to the Hindu God Vishnu, the temple was built around 1258 AD by a general, in the court of King Narasimha III of the Hoysala dynasty, that ruled most of what came to be known as Karnataka.

The temple is of a typical Hoysala style, with a central courtyard, surrounded on all sides with a colonnaded gallery, housing a series of small shrines and rooms. The main temple lies at the center of this courtyard, and is a composite structure, comprising three shrines, dedicated to Keshava, Janardhana and Venugopala, all forms of Lord Vishnu. Most of the temple is built of greyish black soap stone, except for areas where different kinds of stones have been used for repairs. Virtually every inch of the temple is richly carved, with reliefs featuring various Hindu Gods and Goddesses, kings and scenes from the epics Ramayana and Mahabharata. But the most striking feature of the temple, has to be its columns, which display a degree of perfection that could have only been achieved if the columns had been shaped using a lathe machine. So perfect are the finishes on these columns, that even after almost a thousand years of neglect and damages, they appear almost as new.

The temple courtyard is enclosed by strong stone walls, and is entered through a gateway, that opens into a pillared hall, beyond which lies the courtyard. The gateway shows signs of extensive repairs that have changed its look forever. The pillared hall has a large stone stele, with inscriptions in Kannada, the local language, and describes the building of the temple, and of repairs by later kings. The temple was damaged extensively by invading Muslim conquerors from the Northern part of the country, and was repaired greatly in the time of the Vijayanagara empire. In spite of  a series of repairs carried out throughout its existence, the temple still bears marks of the damage it has suffered in the past. Most of the small shrines along the gallery that encloses the courtyard,lie empty, their idols stolen long ago, while some others contain heaps of broken pieces from statues and decorative stonework.

The main temple rests on a star shaped high platform that is adorned with rich carvings throughout its surface. A flight of wide stone stairs leads to the main doorway of the inner sanctum of the temple. Inside lies a central hall with the three shrines on its three sides. The shrines contain large stone idols, that have become almost shiny, thanks to the touch of thousands of pilgrims over the years. Being inside the sanctum of the temple, is almost like travelling back in time. Even though worship at the temple has stopped centuries ago, one can still feel the holiness and importance that this place once had.

The exterior facade of the temple is richly decorated, and the level of detail is awe inspiring. The details are so fine, that even the edges of the finger nails of statues can be clearly identified. The carvings on the facade are divided in levels, each on top of the previous one. The bottom ones show the lives of the kings and the wars fought by them, while the upper levels show various deities and their different forms. The transition as we go up the walls, is created to mimic the transition from the world of men to the world of the Gods. The temple is topped with three pinnacles that sit on top of the three sanctums that form the body of the temple. The pinnacles are short and are typical of the Hoysala style of temple architecture. They too are decorated with rich carvings across their surface. The carvings on the temple, though display the highest quality of workmanship, also show signs of extensive damage, that they have suffered over the years.

The carvings on the temple give us a glimpse of an ancient world and the lives of the people who lived in it. It speaks of a time when building magnificent temples was a means to showoff power, as much as to show dedication to God. It also reminds us of the hundreds of nameless men and women who had worked hard to carve every single stone that was used to build the temple, creating something that would make them immortal, and forever freeze their efforts in stone.

How the “Salt Fortress”​ became Austria’s Most Inspiring City