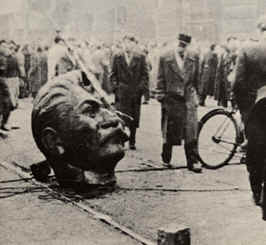 1956. Remarkable year for those who stood under the rule of Communist Russia in Eastern Europe. Hungary, following Poland tried to challenge the Russian rules, which haven’t changed much after the death of Stalin. The actual leader was Mátyás Rákosi, who is forced to resign by Khruschev, the new Russian leader, in a gesture to the Hungarians after they took the streets to protest. He is followed by Imre Nagy (as prime minister) and János Kádár (as foreign minister), who were considered to be liberal enough to keep the protesters under control.

After the resignation of Rákosi, the Hungarians were not satisfied. They still went to the streets of Budapest, protested and said out loud what do they want, in the so-called Sixteen Points, which included personal freedom, more food, the removal of the secret police (ÁVH), the removal of Russian and so on. They started the real revolution on 23rd of October. The leaders of the Communist Party didn’t respect the peaceful demonstration since they fired the unarmed mass of people.

The Russian Army had pulled out and Nagy allowed political parties to start again. The most famous man to criticise the Russians, Cardinal Mindszenty, was released from prison. They had the belief to gain new rights such a Poland for a very short time. Soon after the revolution, Russian tanks started to appear: they came back and had no mercy. On November 4th, they “took back” Budapest, killed the healthy and the wounded, the old and the young to show: they are the one who can order.  At around 30 000 people were killed. Imre Nagy (who joined the Hungarians against the Soviets, meanwhile Kádár establishes a rival government in Eastern Hungary), was also executed and buried in an unmarked grave (reburied with respect with other revolution martyrs in 1989).

Children of Glory (2006), a film by Andrew J. Vajna, covers the story of this revolution, by showing a parallel situation the Hungarian water-polo players had, when competing in the Olympics. Conflicts raise in the sports basin and on the streets of Budapest simultaneously. The golden player, Karcsi Szabó meets the fiery Viki Falks, who is one of the main organisers among university student revolutionaries. Karcsi understands better what are they fighting for as he follows the girl who falls in love with. Becoming part of the revolution, watching people as being killed, and killing out of self defense: the golden boy meets a new life. Viki convinces him, though, that he has to represent “The New Hungary” at the Olympic Games, so he leaves with the water-polo team, meanwhile the Soviet tanks appear again and show the Hungarians who has to be in charge. I think the film has a good balance between a war demonstration and a love story. The young and the old can both enjoy this drama, being excited for 114 minutes. Click on the image below to watch the original trailer. Also check out the promotional trailer for Cannes here.

Besides films, everyone can meet how the Hungarian revolution started and ended, when visiting the House of Terror Museum in Budapest, at Andrássy Street 60. Furthemore, an interactive exhibition can be viewed in the subway at Kossuth Square, near the Parliament, where the main demonstrations were held. This year is also named “The Year of the Hungarian Freedom”, commemorating the sad events happened 60 years ago.

Also, check out promotional trailer of the film for Cannes here.

A Photo Essay: Tracing the Spirit of Yoga

Football to keep my grandfather alive