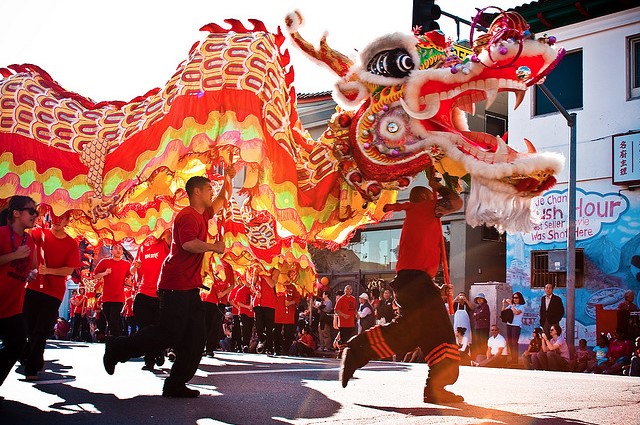 Chinese New Year is among the biggest and most celebrated festivals in the Chinese community, bringing families together as they mark the start of the New Year with prosperity and good luck. As the people of China follows lunar calendar for their festivals,  date of the festivity varies  every year. Its date corresponds with the occurrence of new moon (or black moon) that falls either in late January or February.

Chinese new year is also known as the spring festival and lunar New Year. New Year celebrations traditionally run from new year’s eve to the Lantern Festival on the 15th day of the first calendar month. The Lunar Year is centuries old and gains significance because of several myths and traditions. Traditionally, this festival in china is celebrated as a time to honor deities as well as ancestors.

During the season of Chinese New Year streets of China can be seen occupied by variety of banners, firecrackers and lion dance performances, every corner of the localities is filled with lively celebration. According to the ancient Chinese story, the New Year has not always been the time of festivity. However, the celebration only started much later based on an ancient Chinese story “Nian”, where every new year a beast would rise, swelling from the sea to ravage Chinese villages in livestock and hurt people. To protect themselves the villagers would put food in front of their doors at the beginning of every year. It was believed that after the Nian ate the food, it wouldn’t attack any more people.

Soon, with an advice of a wise old man, villages found out that the only way out of this problem is to make a small explosion with the gunpowder and lighting lamps and by hanging red banners with religious chants written all over them so as to scare the beast away.

As the years passed, the story was adapted as a tradition, evolving since thousands of years into a wonderful cultural heritage of China.

To make the celebration safe and enjoyable for the mass, every year, public celebrations are organized at countries and territories with significant populations, including Mainland China, Hong Kong, Macau, Taiwan, Singapore, Thailand, Cambodia, Indonesia, Malaysia, Mauritius, and the Philippines, that are enjoyed by over millions of audience.

These celebrations are comprised of a lively lion dance that combines art, history and culture with a rigors of Chinese martial arts movements. In which two or more dancer forms a lion. One dancer holds lion’s head while others hold the tail of the lion, together dancing to the rhythmic drums, cymbals and gongs.

In Singapore New Year celebrations starts a few days or even up to a month before the festival arrives. Families take the opportunity to visit relatives and friends primarily during these days.

Streets are lit with the colors and lights describing the arrival of the festivities, bringing the sense of joy in the atmosphere. Shops, restaurants, hotels and homes are decorated. Families shop for new clothes and clean their homes; malls are beautifully decorated with red lanterns and traditional Chinese music plays in the background. And it is during this time that you see Chinatown and other major streets come alive with stalls selling New Year goodies, as well as innovative decorations. The pre preparations and New Year eve’s celebrations being same throughout the China, first two days of the new year hold more significance at Singapore.

First day: First day of Chinese New Year is a time to honor elders and visit the oldest and most senior members the family until the evenings. At the evening, fireworks and bamboo sticks are burned to chase off the evil spirits as encapsulated by nian. Some people on the first day, especially Buddhists abstain themselves from eating meat, based on their belief that eating meat on the first day will  shorten their lives.

Second day: On second day, married daughters pays a visit to their birth parents and relatives. By some second day is also celebrated as the birthday of all dogs and hence should be celebrated as a day to admire and treat them.

The centerpiece of the Chinese New Year festivities in Singapore is the Chingay Parade, a grand carnival-like street parade organized on the 8th day of the New Year confined of dazzling floats, thrilling spectacles and sizzling dance performances.

Also famous worldwide for its 15th day celebration of the New Year. Singapore holds a gathering at River Hongbao on the Marina Bay Floating Platform and the Esplanade Waterfront Promenade.

Before the Spring Festival, every family perform a thorough cleanup of the house and go out for a festive shopping.  It is believed that the cleaning sweeps away bad luck of the preceding year and makes their homes ready for good luck. Brooms and dust pans are put away on the first day so that the newly arrived good luck cannot be swept away. Purchasing new clothes and shoes is considered as symbol of new start. The spring couplets (Fu Character) and other traditional red colored paper-cuts, known to bring prosperity to the family, are pasted on the doors and hanged around the house for decoration.

Often, New Year’s Eve is an occasion for families to gather at homes or nowadays at a restaurant, for a sumptuous annual reunion dinner, named as “Nian Ye Fan“. In some families, it is essential to serve fish to symbolize the popular Chinese phrase which means “may there be surpluses every year”.  Niangao (glutinous rice cake) and dumplings being some of the other famous delicacies enjoyed during the festive season. Red envelopes and gifts are shared among children and adults as a symbol of love and blessing.

Another common custom during Chinese New Year is of sharing red envelopes (commonly known as “ang pow”) a symbol of love and blessings. It is the highlight for children and a tradition for married couples to give the ang pow to children or parents to signify blessings.

Apart from all the fascinating activities and excitement during the celebration, Chinese New Year, at the core of it all, is a time of togetherness, a time to forgive and forget all grudges and sincerely wish peace and prosperity for everyone.