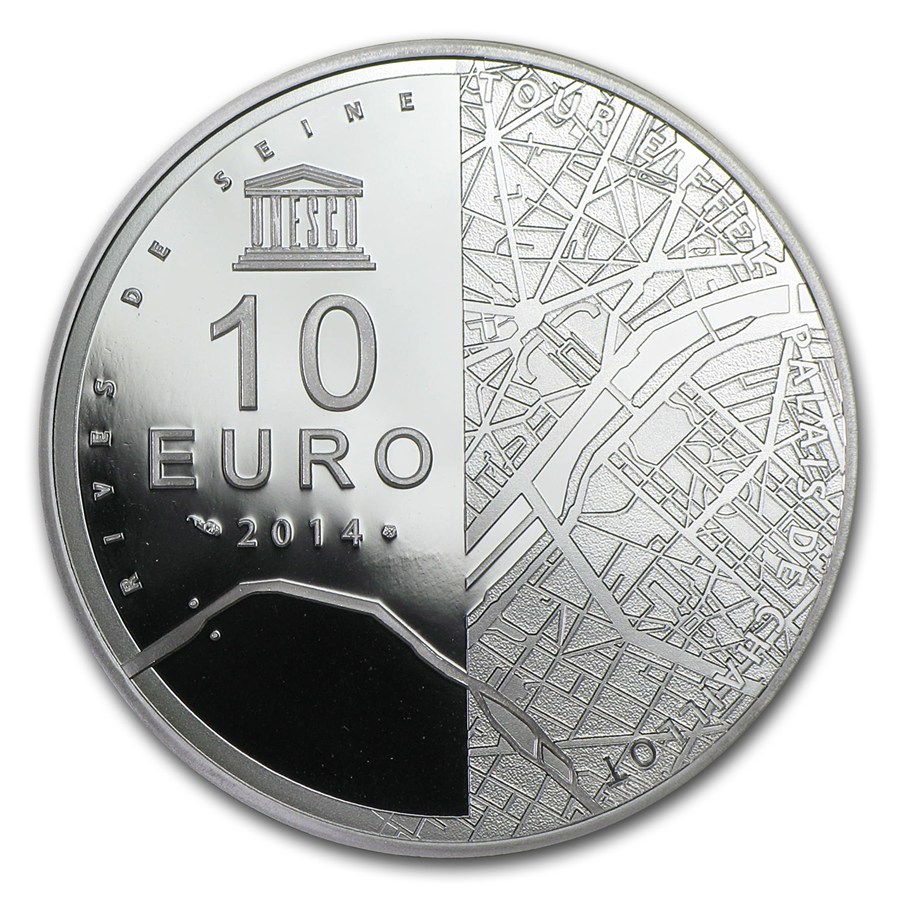 Part of the UNESCO World Heritage Site series, Monnaie de Paris is celebrating the 125th anniversary of the Eiffel Tower. The background highlights the monument’s metal architecture. Between the legs of the Tower, the massive windows of the Palais de Chaillot can be seen. The reverse is separated into two parts. The UNESCO logo and the face value are on the left side and an aerial view of the location of the two monuments appears on the right side.

The Historical Centre of Oporto is the city’s oldest part, the urban mesh marked by its medieval origins, declared Cultural World Heritage in 1996 . On the obverse, the coin presents the city’s skyline, the denomination, the coat of arms, the date and the inscription “República Portuguesa”. The reverse puts on view an image and profile of Oporto as seen from the Gaia quays on the left bank of river Douro, the legend «Centro Histórico do Porto» referring to the city’s historic centre and the Unesco World Heritage logo.

The Landscape of the Pico Island Vineyard Culture has been a UNESCO World Heritage Site since 2004.
On the obverse of the coin, designed by sculptor Paula Lourenço, can be seen a vine emerging from the volcanic stones, along with the crest of the Republic and its face value. On the reverse is the representation of the Pico volcanic cone, partially covered by cloud. At its base is an interpretation of the so-called curraletas. By minting this coin the Portuguese Mint and Official Printing Office is continuing with the series dedicated to Portuguese UNESCO World Heritage Sites.

The composition is completed by the World Heritage logo and the word UNESCO.
Tower of Belem is a cultural reference, a symbol of the specificity of the country in relation to its special capacity for dialogue with other cultures and civilisations. In 1983, it was officially recognised by UNESCO on the World Cultural Heritage List.
The coin, designed by sculptor José João de Brito, shows in its obverse a composition consisting of the Portuguese Shield and the face value.