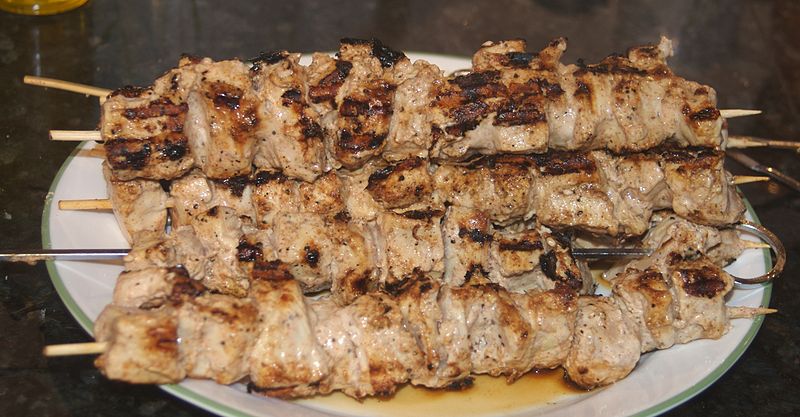 “The most important activity in human life is eating. As any community or nation progresses, its diet is the most salient guide to its refinement,” inscribes the playwright Abdul Halim Sharar in Guzishta Lucknow , as an introduction to the narrative on gastronomic delights of Lucknow, located in the northern state of Uttar Pradesh, India.

Sharar’s vivid account takes the reader on an aromatic trail, through the winding lanes of steaming cauldrons, sailing across streams of wine and opening up into fecund orchards of fruit-bearing trees. Lucknow’s dietary opulence is splendidly archived in such contemporary works and offers a sneak-peek into the royal kitchens. Thus unfolds the legacy of a lost culture, its culinary heritage, and food aesthetics….

Nestling on the banks of the Gomti river, the provincial court of Awadh thrived on the decadence of the Mughal court. The unhurried, yet ineluctable disintegration of the Mughal imperial system escalated the growth of regional kingdoms like Awadh, Hyderabad, Murshidabad, and Rampur, whose rulers exercised considerable autonomy. The political turmoil in Delhi led to the migration of the men of merit- artists, architects, poets, musicians, and cooks, to these infant courts. Thus, the twilight in Delhi marked a new dawn in the provinces, as autumn stepped into the empty studios in the erstwhile capital, the ateliers in Awadh were celebrating their first spring. Sa’adat Ali Khan, a Mughal noble belonging to an affluent merchant family of Khurasan, became the first Nawab of Awadh. The first few generations were busy consolidating power, and therefore, had little time left to engage in sensual pleasures and artistic extravagance. It was from the time of Nawab Shuja Ud Daula that court patronage was extended to the arts.

The cities of Faizabad (the first capital of Awadh) and Lucknow were embellished with pleasure-pavilions and royal retreats, the bazaars whiffed of sandalwood and ittar and the streets reverberated with the tunes of thumris. Awadhi food acquired its finesse and subtle refinement at this point in history. Nawab Shuja Ud Daula’s meals came from six separate kitchens. A lavish amount of ‘60,000 rupees a month were spent on food and delicacies,’ estimates Sharar. This, however, did not involve the salaries of cooks and other servants employed in the gastronomic service of the Nawab. Contemporary accounts make it evident that the gourmet chef, called the Rakabdar , was a highly paid royal servant and held high social status. He was, in every sense, an artist- he would experiment with spices and condiments, would taste foreign delicacies brought in by the European Merchants (especially the French in Lucknow) and give exquisite anatomies to the simplest of dishes. Thus the royal kitchen was a laboratory, where the cook was free to experiment under the patronage of their epicurean masters.

Nobles have always indulged in subtle games of wit to establish one’s superiority over the other. Though entirely symbolic, and recalled only in public memory and folklore, such anecdotes throw light on the culture of the court. Cooks in Awadh mastered the art of preparing the same item in different guises. Sharar records how Nawab Wajid Ali Shah invited Prince Mirza Asman Qadar, a connoisseur from Delhi, to dine with him and tricked him to embarrassment. What resembled a fruit preserve (Murabba) turned out to be a braised meat gravy (Quarma)! This, the Mirza couldn’t make out. Such was the artifice of the Awadhi cooks.

Awadhi cuisine represents an estuary of cultural influences: the elite, urban culinary traditions of the Persians (the Safavid court in particular) and the Mughals mingled harmoniously with the rural food of Indo-Gangetic plains. This confluence is an important constituent of the composite culture of the place, poetically called ‘Ganga–Jamuni.’

Awadh’s love for pulao (a flavored rice preparation incensed with various exotic spices like zafran (saffron), and extracts from plants like keora ) is perceptible from the sheer variety of pulaos that were once steamed, served and savored. Their names evoke a sense of poesy. The stench of decay has not been able to overpower their subtle, sublime aroma. Sharar’s list include the names of the following varieties- Gulzar (the garden), Nur (the light), Koku (the cuckoo), Moti (the pearl) and Chameli (the jasmine). Awadh’s nav-ratan pulao was a treat for the eyes- the rice grains were dyed using edible colors and made to resemble the nine precious gems. Unlike the Dilliwallahs (Delhiites), the people of Lucknow preferred pulao over biryani. Nasir ud Din Haider’s reign saw a cook who made Khichdi entirely using almonds and pistachios. He would cut the almonds into shapes resembling rice grains and the pistachio nuts into lentil-like forms. Such dishes would delude the eyes but caress the tongue.

Dum-pukht is another enigmatic aspect of the Awadhi cuisine. Oral sources trace the origin of dum -pukht to Nawab Asaf ud Daula’s famine relief measure which started in 1785. It is said that the construction of the magnificent Bada Imambara in Lucknow was commissioned by the crown to employ the bands of starving people. This also involved a food-for-work program. Huge cauldrons (traditionally called deghs) were brought in and rice was cooked together with meat, spices, and vegetables in low heat. The cauldrons were sealed using wheat-flour dough. The steam could only escape once the lids were removed and this added to the aromatic appeal of the dish. However, we find the mention of dum-pukht as one of the ten methods of cooking meat in Abul Fazl’s Ain-i-Akbari, that predates the era of Asaf ud Daulah. Future explorations in archaeology and cultural anthropology may reveal Central-Asian origins of this method.

Dum-pukht was revived and brought to the global stage by the veteran chef Imtiaz Qureshi, who is descendent of khansamahs (chefs) of the Mughal rulers. Qureshi’s extensive research on the traditional cookery of Awadh and his innovations has helped to keep alive the tradition, in fact, it laid the foundations of the ITC’s restaurant specializing in Lakhnavi cuisine. The restaurant was christened dum pukht and has thrived under the master chef’s guidance. Art historian Holly Shaffer, in her phenomenal essay on dum-pukht (Dum Pukht: A Pseudo-Historical Cuisine), cites references that point to the fact that Lakhnavi cuisine is less spicy than Mughal food. It has smoother textures (the shahi gravies) and is softer (like Kakori kabab) apparently, because Asaf ud Daulah lost his teeth and, also because chewing was considered unrefined in the court. The spices to be used were carefully selected on the basis of Hakim’s advice. Thus, considerable importance was given to the health of the consumer.

“Mangoes made me long for summer when I was growing up in Lucknow. There was a divine quality to the anticipation of succulence in the rasping dryness of the pre-monsoon heat,” recalls Professor Mukul Mangalik in his essay on the food of his beloved city, his natal home. The people of Lucknow and Banaras, the twin epicenters of the Ganga-Jamuni culture, find immense pleasure in Mangoes. Mango orchards get transformed into venues for soirees during the spring. Fruit bearing trees give shelter to mating birds. The mango tree encapsulates a seasonal dialogue between fertility and eroticism, which flowers perennially in the Indian imagination. Professor Mangalik tempts the reader by unfurling a list of mango names which are prevalent in Lucknow- gulabkhas, lab-e-mashuk, khas-ul-khas, Abdullah-pasand, samar bahisht, and the list continues…

It is practically impossible to capture Awadh’s culinary horizon at one glance. Like its poetry, like the awnings of its palaces,it is multi-layered. As Sharar rightly said, food is a window to the community’s culture- its adaptive strategies, its response to the external challenges and internal cravings, its way and interpretation of life.

It is here that the elite and the downtrodden meet, and it is also from here that the two diverge. Asaf ud Daulah was enticed by the smell of the commoners’ food, similarly a common man might have invented an affordable version of a royal delicacy. But such innovations are rarely recorded in history. In order to trace the roots of Lucknow’s “subaltern” cuisine, the musafir in you must desire to travel beyond the confines of the court and delve deep into the world of the ordinary, yet art-loving Lakhnavi. Hence, a lot remains to be tasted.

A Fusion Most Preferred: Indian-Chinese Cuisine