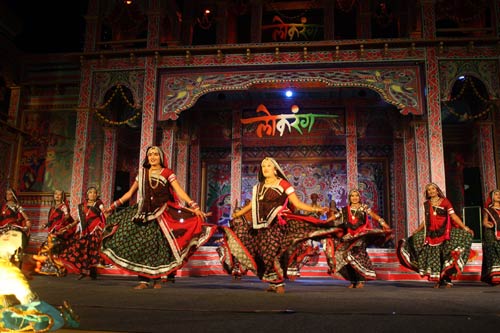 The five day long festival of Lokrang in Bhopal begins every year on 26th January (the republic day). It is a cultural exposition organised by Madhya Pradesh Adivasi Lok Kala Academy. The main features of the Lokrang are folk and tribal dances, classical dances, performing art form, exhibition and presentation of art and craft and cultural presentations from abroad also are a big draw.

One of the main attractions of Bhopal is the Bhopal Utsav Mela. This fair is an incredible blend of trade, culture and amusement activities. There are trade stalls showcasing mainly electronic items, furniture, handicrafts, accessories and automobiles. Stalls of mouth watering local delicacies at the venue will make your visit memorable. For the street food fans, this is a place to be. This fair is held during winters mainly around December to January and goes on for 40 days. There are a variety of cultural performances held during the fair like laughter shows, celebrity packed musical nights, magic shows and more. Numerous popular and aspiring musical bands including some child prodigies from across India mesmerize the crowd with their brilliant vocal and rhythm performances. Experimental music including the rock versions of notable old songs and compositions synthesizes the yesteryear and modern music beautifully. Distinguished Hindi literary genius and poets have been seen adding up to the charm of Bhopal Mela by reciting their poems or compilations in the past.

Bharat Bhawan was inaugurated by Mrs Indira Gandhi on 13th February 1982. Bharat Bhawan is a multi art centre set up to create an interactive proximity between the verbal visual and performing arts. Cultural programs are held regularly to promote the culture and tradition of India. Art exhibitions are also held here. There is an open theater overlooking the beautiful Bhopal lake. Tribal museum is the specialty of this place.This center is a cultural hub and for any artist it’s an honour to perform here. I have witnessed several performances here including the “bansuri vadan” and “kathak”, I was literally spell bounded by these performances. It’s a must to visit this place if you want to explore the culture of India.

According to me after Gujrat, this city shows us the real colours of garba and dandiya. The whole city is decorated beautifully and when approach one of the multiple venues you can’t stop yourself from entering and being a spectator of this magnificent culture. Loud spell bounding beats, lights, colours and mouth watering food(plus the delicious “falahari” food) is what garba in Bhopal truly is! Special classes for the participants are conducted so that they know this beautiful dance form and present it elegantly in front of the spectators. Garba is mainly conducted during the Durga puja.

Aalami tablighi Ijtema (World preachers congregation) is an annual Islamic ijtema congregation held in Bhopal in the month of December. This is a three day congregation which includes discussion about faith and peace. Scholars speak on a variety of subjects including the Islamic way of life and the six principles.