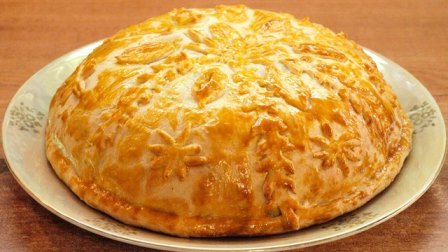 In Russia we call them PIROGí (пироги) and the little ones piroshki (пирожки). Pirogi are traditional Russian meal, it’s a sort of a pie, made of yeast dough, glazed with an egg and butter and filled with various combinations of fillings! What’s interesting that in Russia we use the general words pirogi and piroshki for any kind of savory pies and even sweet cakes, no matter which dough they are made of and what’s inside!! Of course we have specific names as well depending on a region, cooking technique and a filling, but most commonly we would call them all YUMMY piroshki!

They have been around since EVER! In Russia pirogi were made since the beginning of times! As the country

was mostly agricultural there was always enough wheat to make this meal. First mentioning in a written source about this food is by Adam Olearius[1], 17th century German scholar and traveler, who describes pirogi in his travel diary and notes their nice taste. Russian fairy tales talk about pirogi as well! The story of KOLOBOK, an alive sweet bun who left his parents’ house and went travelling all over is known to every kid!

The Name pirogi has a word PIR in its route, which means a feast. Indeed any celebrations or feast is Russia would have pirogi on the table. Back in day this meal
was common for peasants and nobles, tsars (Russian kings) and priests. They were given as gifts and charities.

Pirogi have been important in rituals and venerations since ancient times. The pirogi were served for weddings, funerals, Christmas and Easter. Young girls put a little piroshek under a pillow on a New Year’s eve to attract a fiancé in the New Year.  After Christmas and before the Great Lent the folk would practice various divination including those on pirogi! They would put coins, grains, rings in a pie and try to predict the new year accordingly – a ring would mean a marriage, grains – good harvest,  coins – prosperity! On weddings the parents of bride and groom would greet newlyweds with a big pie which the couple was supposed to eat without using their hands. On funerals the pirogi were used to be “given“ to the diseased as a last meal he would keep on his long journey on the other side of life.

The tradition continues in the 21st century Russia. The Russians would eat pirogi as a snack, in the fast food, would take them to work for lunch and have them for dinner.

Hmmm… interesting story you would say… But what’s so yummy about them?

First of all pirogi are very easy to eat : you could eat them with your bare hands, breaking a big pie into pieces or having a mini piroshek. They are super useful for lazy households not to soil extra kitchenware, to take away or go picnicking.

Then they have hundreds of variations and fillings! Imagine any kind of topping and you will have a pirog

with it in one of the regions of Russia. Savory and sweet, varied in shapes, preparation techniques and eating habits – pirogi will never bore you! The most typical savory piroshki and pirogi are those filled with cabbage (sounds weird, but those are the best), mushrooms and potatoes (sometimes mixed or separately), any kinds of meat, rice and egg, parsley and egg and of course fish. The sweets ones are traditionally with jam, berries and fruit, sweet cottage cheese, raisins and nuts. I come from the North of Russia, close to the White Sea, here we make amazing pirogi with salmon and other kinds of fish. Of course for an inexperienced traveler some of the combinations would sound a little odd unless you try them and then you’ll never stop!  Traditionally pirogi are baked in an oven however sometimes, usually in the South, they can be fried in a pan. To make them look even prettier they are glazed with egg and butter.

You would usually eat piroshki with a glass of milk or a cup of tea (if it’s cold outside J), dipping your little pie in the drink. Nothing better than this!

Pirogi and piroshki are called differently and prepared in particular ways depending on a region in different countries. I do believe that delicious pirogi prove uniqueness of cultures and traditions and at the same time unite us in love to this yummy meal and make us long to bite them! Here is my little story about them in Russia. Tell me the ones from your county!

The Frankfurter – From Emperor to Chancellor