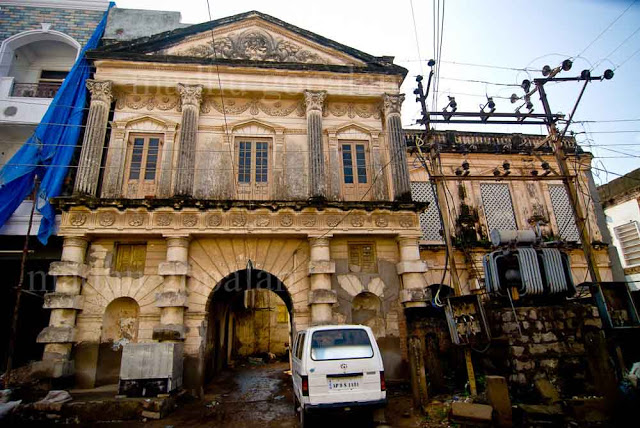 The old city of Hyderabad has a grand history of over 800 years. It is famously known world-wide, for housing ‘The Charminar’ and its Char-Kaman. But what is not known about the old city is that it also housed numerous palatial residences of the nobles called ‘Devdis’. These Devdis were the places where the Hyderabadi tehzeeb (lifestyle) evolved and are thus culturally, socially and historically significant. Contrary to the grandeur these Devdis witnessed in their days of glory, today most of them have been mowed down and the few surviving are in a state of neglect.
In the 18th and 19th century, the aristocrats and affluent lived in these traditional fortified devdis. They had 3 exceptional features, the main entrance or the gateway, high enclosed walls and inner courtyards. Security was perhaps the highest priority and the devdis used to be heavily guarded. They were like mini fortresses which were also equipped to provide shelter, security and resources during troubled times to the noble and his clan, which included extended family as well as the servants.

As time went by, the nobles started building larger and more impressive devdis as a statement of their wealth, power and influence. The structure of a devdi evolved around series of courtyards with sundry structures radiating out of the courtyard. Except for the Hindu devdis, all had segregated living quarters for men and women. They also accommodated public enclosures like the office of the noble besides the private living quarters.

Some interesting features of the devdis include the main gate that happened to be high enough to let an elephant pass through and the upper floor of these entrances and accommodated space for traditional music to be played during ceremonial occasions.
Inside the devdi, the interiors of the open pillared halls, where the nobles entertained the guests were heavily decorated with wooden or painted ceilings, multi-foliated arches, stone or wooden pillars, stucco work and wooden carvings. They were furnished with velvet carpets embroidered with gold and silver. Chandeliers, both hanging and standing, were customary.

Numerous European travellers have left accounts of these beautiful devdis. Be it the language, literature, music, dance, etiquette, courtesy, entertainment, cuisine or dress, it was in the devdis, that this Hyderabadi tehzeeb was nurtured right from childhood.

But the partition of India in 1947 and the abolition of the princely state left the nobles debt ridden, without their traditional income. They had to sell their property and one by one the sprawling devdis were demolished. Today only a few of the devdis survive, most of them isolated, crying for attention. A few others, house schools or function halls. Around the city, a couple of gateways stand freely without their walls. These were once entrances to the magnificent devdis. Now cramped with new concrete constructions all around them, the remnants of these devdis even in their state of decay are beautiful and have their own story to tell.

Standing in the midst of the ruins of these devdis, one can try to visualize the structure during its heyday and be transported to an altogether different era. Imagine the hustle and bustle of the household full of life, servants running around, social gatherings taking place, live music being played, food being served and fountains sprinkling.

Earlier I had passed through these places numerous times, ignorant of their history and wondering why these structures were still standing. Years later, today, I crave to visit them and its heart-breaking to see a piece of them fall apart every time I do so. These devdis are a part of who we are today. They have helped form and develop the lifestyle and culture of every Hyderabadi. What has happened cannot be reversed, but  I feel telling their story is important as ignorance leads to neglect. One can only connect to the bygone era and its heritage, if the stories of these wonderful structures are told. And I for one, have tried to make an attempt at it.