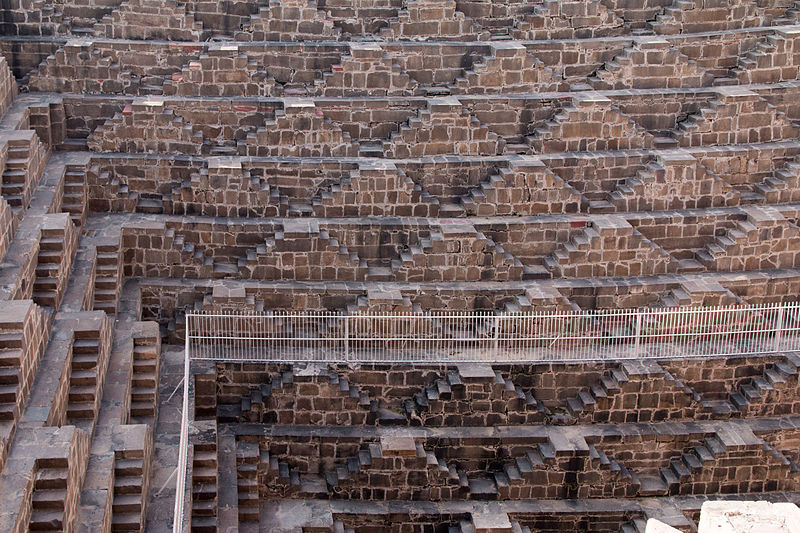 M. C. Escher (1898-1972) was a Dutch Artist who made calculatedly thought-out woodcuts, lithographs and mezzotints. Initially in his career, he took inspiration from nature, landscapes and their details. These structures of reference seemed like art themselves, making his resultant work enthralling. He traveled through Europe, mainly in Italy and Spain and drew buildings, townscapes, architecture but has always mimicked the style of a Graphic Artist.

While studying some of his works, I came across an interesting find. A historical site located in India, seemed to look as if M. C. Escher’s graphic art had been brought to life. I am referring to the Chand Baori, a step well in the village of Abhaneri in Rajasthan. The village, now in ruins, still attracts tourists from the whole world because of the Chand Baori. The step well is located opposite to the Harshat Temple Mata Temple, and was constructed in 800 AD. It consists of a staggering 3500 narrow steps over 13 stories and extends  to almost 100 ft. into the ground. It is one of the deepest and largest step wells in India.

It would be truly amazing if M. C. Escher knew of this place. Very clear and stark climatic issues involved in the development of such architecture. It is reported that the arid climate forced the locals to dig this deep for a dependable water source. The structure and deployment of staircases seems to have numerous subliminal connections with the  works of M. C. Escher.

Other than translucent linkages with M. C. Escher’s graphic art, Chand Baori has also made it to the silver screen. Some of the movies that featured it include The Fall, The Dark Knight Rises, Best Exotic Marigold Hotel etc.

The Eyo Festival of Lagos