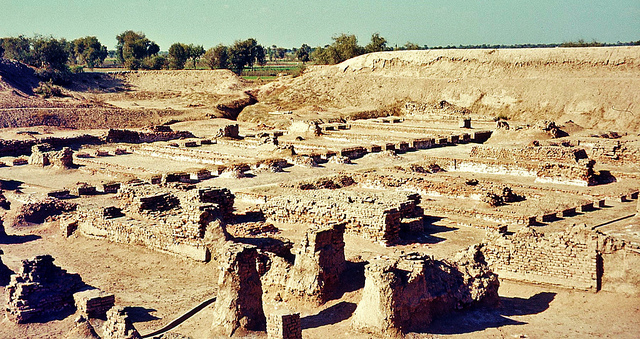 Harappa is one of the most widely known archaeological sites in the world. Even today, archaeologists and antiquarians continue to unearth new evidence and discover new sites associated with the civilisation.

The Harappan civilisation was primarily located in Western India and Pakistan, though newer sites in regions in and around Haryana have also been found through recent archaeological endeavours.

One such site is in Rakhigarhi, a village in Hisar district in the state of Haryana in India. I decided to look at Harappa in terms of conservation because it is one of the most widely known nucleuses of historic and cultural data. I spoke to a historian, Wazir Chand Saroe, who plays an active role in collecting artefacts, in order to glean more information about the Harappan sites, and the nature of the excavation process.

Saroe started collecting artefacts when he was in his teens. He would find odd objects and shards from the mounds near his home in Rakhigarhi village. Later, he became a full time historian after taking voluntary retirement as a primary school teacher.

Through his endeavours as a historian, he developed a keen interest for the collection of artefacts, and became a modern day antiquarian of sorts. He has given away most of the invaluable collection to the Archaeological Survey of India, the National Museum in New Delhi, a private museum at Jhajhar in Haryana and the state government’s museum in Hisar.

During our interview, he told me about the artefacts he collected from the village.  Terracotta figurines of animals such as buffaloes and dogs, perforated jars, tools , beads , shell and terracotta bangles, chert blades and children’s toys are just some artefacts that Saroe has collected over time.  The abundance of artefacts give us a hint of the extent of their production during the Harappan period.

Other artefacts in the collection are weights made of terracotta and stone, dish-stands, beads made of semi-precious stones such as carnelian, faience, lapis lazuli and steatite, grinding stones, big terracotta plates and a typical large-sized Harappan brick with the footprints of an animal.

It is during the monsoon season that Saroe collects these artefacts. The heavy monsoons expose the artefacts lying under the soil, when it imbibes moisture. The other villagers also occasionally stumble across artefacts and give these to him.

However, there are several problems associated with excavation and the unearthing of artefacts in the Harappa sites.

The Limitations Associated with the Harappa Excavations:

According to Saroe, diminished awareness is one of the issues associated with excavation. Most people do not know about relatively new sites such as Bheerana, Rakhirgarhi. Even though excavations continue to take place, these sites are still unexplored to a great deal. Relating to this is another problem of the location of sites. They are located beneath the agricultural fields of Haryana, which provide livelihood to a large number of farmers.

The farmers receive compensation from the government if their fields are excavated, but their crops are often lost. This presents a conundrum in the archaeological spectrum, since the livelihood of contemporary communities is endangered by the desire to learn about our past! Several ASI publications and magazines in Saroe’s possession gave insights into these problems, as well as the excavation process.

From these discussions, it is clear that the process of archaeological excavation is one that needs to be carefully planned. The planning required is much larger especially when sites intersect with contemporary land-holdings that provide economic support to communities. Looking at these parameters, it becomes clear that despite it is necessary to re-construct our past, there needs to be a careful consideration of environmental factors.

The India Gate: A memorial to unknown soldiers