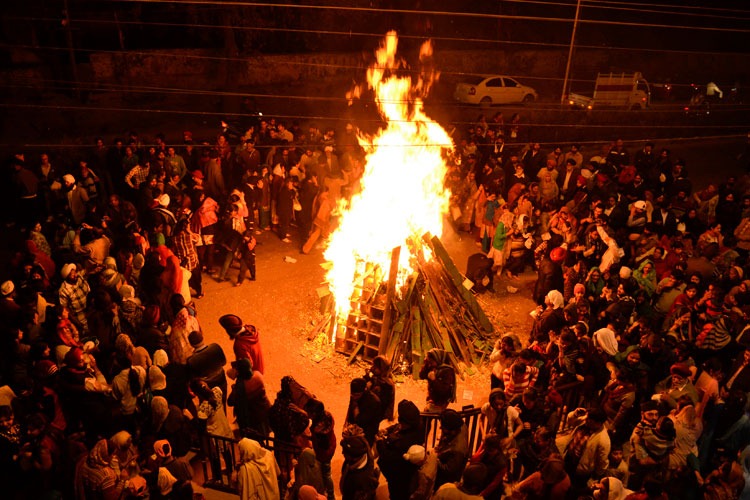 There are various festivals celebrated in India. I would like to point out some of those of North India:

Chhath, also known as Dala Chhath is an important festival celebrated in Bihar and Uttar Pradesh and many other parts of India in which setting Sun (dusk) is worshiped. The best place to witness Chhath would be around Northern Bihar where it is celebrated in great grandeur. The festival is observed since time immemorial with the faith that the Sun God fulfils wishes if prayers are offered with complete dedication and devotion. Along with the Sun God people worship Chhathi Maiya on this day.In 2014, it falls on Wednesday, the 29th of October.
Nowadays it can be easily seen at the ghats of Yamuna in Delhi and other parts of India indicating its presence across the country.It is a festival connected with purity, devotion to the Sun God who is considered as the source of life on this earth and is regarded as the deity who fulfils all our wishes. The festival is celebrated with an aim to express thanks to Sun God for offering energy to earth continuously enabling the environment suitable for the people to live. In the evening people express their thanks to Sun God for its work in growing their crops during the preceding year and in the morning it is considered as a request for a bountiful crop, peace and prosperity in the year to come. Devotees assemble at the rivers and ponds including Ganges and take a holy dip before preparing offerings (Prasad). The main constituent of the offerings are Thekua, which is a wheat based cake.
Source: http://www.indiatvnews.com/news/india/the-origin-and-significance-of-chhath-puja–18673.html

Guru Nanak Dev, the founder of the Sikh faith was born in 1469 A.D. in Lahore, Pakistan. Guru Nank Jayanti or Gurpurab marks the birth anniversary of the founder of the Sikh religion. It is a celebration of the birth anniversaries of 10 Sikh gurus as Gurpurabs with devotion and dedication.Guru Nank Jayanti is marked by prabhat pheris or early morning processions that begins from the Gurdwaras and then moves to different localities singing hymns or shabads. The celebration lasts for 3 days. It will be celebrated on Thursday, the 6th of November,2014. A procession is carried out on the day before his birthday which is led by the Panj Pyaras (Five Beloved Ones). Sikh flag, or the Nishan Sahib and the palki or the palanquin of Sri Guru Granth Sahib is taken out in the procession. The procession also includes a group of singers singing hymns in praise of Guru Nanak and Gatka teams displaying their showmanship through martial arts. The day begins early with the singing of the morning hymns and hymns from the Sikh scriptures. It is followed by lectures in praise of Guru Nanak. Langar or special community lunch is prepared at the Gurdwaras and is offered to men and women of all communities. In the evening, the Gurdwaras are illuminated and people visit them in large numbers. People also illuminate their homes with candles and earthen lamps.
Source: http://www.indiamarks.com/when-is-guru-nanak-jayanti-in-2016/ –

Shivaratri or Mahashivaratri (Night of Shiva) is a Hindu festival, celebrated all over the country with great enthusiasm. The festival is exclusively dedicated to Lord Shiva who is known by hundreds of names. Maha Shivratri is the day to rejoice and pray to the almighty for wellness. On this day, people offer prayers to the Lord Shiva and also observe fasting (vrata) throughout the day. Huge crowd of devotees can be seen outside the Shiva temples where they come for early morning prayers.The prayers continue throughout the night of Mahashivratri and Lord Shiva’s followers offer coconut, Bilva leaves, fruits and specially prepared sacred food for the occasion. As this is a dark fortnight, devotees light candles and diyas (a lamp made usually of clay, with wick made of cotton and dipped in ghee) throughout the night. This is signified as a symbol of spiritual manifestation.
It was celebrated on February 27, 2014. Mahashivratri is one of the major festivals in India and everybody from kids to old-age people like to participate in one way or the other. Lord Shiva is worshiped not only in India but also in other neighbouring countries like Nepal and Sri Lanka.
Source: http://www.gounesco.com/wp-content/uploads/2014/10/Mahashivratri_0.jpg

Lohri marks the culmination of winter, and is celebrated on the 13th day of January, a day before Makar Sankranti. In 2014, it was celebrated on a Monday. For Punjabis, more than just a festival, Lohri is also an example of a way of life. Lohri celebrates fertility and the spark of life. People gather around the bonfires, throw sweets, puffed rice and popcorn into the flames, sing popular songs and exchange greetings. On this day children go from door to door to collect funds for community bonfires which are lit up in the evening. The gatherings and celebrations make Lohri a community festival.The focus of Lohri is on the bonfire. The traditional dinner with makki ki roti and sarson ka saag is quintessential. The prasad comprises of six main things: til, gazak, gur, moongphali, phuliya and popcorn. There is puja, involving parikrama around the fire and distribution of prasad. This symbolises a prayer to Agni, the spark of life, for abundant crops and prosperity.
Source: http://mdcg.in/happy-lohri/

Lal Bahadur Shastri Jayanti is celebrated on October 2 every year. His birthday coincides with that of Mahatma Gandhi. Most people know only about Gandhi Jayanti on this day. Both the two great heroes born on this day dedicated their lives to the larger cause of the nation. The year 2014 will celebrate the 110th birth anniversary of the national heroes.It is a nationwide celebration held at all important Government offices, Schools, Colleges, Institutions and NGOs. This day is also celebrated as Peace Day in some places.The pictures and statues of Lal Bahadur Shastri are garlanded with flowers. Important government, civil services personnel and police officials like the Commissioner of Police are present at the ceremony. It is celebrated with a lot of gusto by farmers because of the deep involvement of the great leader in all affairs concerning their life and development in agriculture.In order to be a part of the celebration, people flock to Vijay Ghat, southeast of Red Fort in New Delhi which is a perfect spot to spend the day in the memory of the great leader and prayer services are also offered by political leaders as well as common people every year.
Source: http://mp3funlab.com/2014/09/send-lal-bahadur-shastri-jayanti-sms-2nd-october-sms-wishes/ –

Celebrating Diwali and a few other Indian festivals