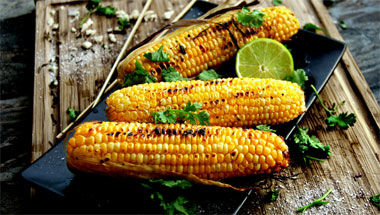 Sitting with my gang of nephew friends on the steps of house, watching the black thunder clouds at a distance and enjoying the cool breeze, I spoke about the most awaited season in India, the monsoons. Down the ages I use to admire this season as it brings relief from the harsh summer with many lovely dishes. As the Monsoon knocks the door, the people patiently wait for the hawker with the delicious bhutta. And why wouldn’t they? If anything truly defines the flavour of monsoon it’s bhutta. It is a perfect snacks packed with all the flavours – sweet, hot, tangy and spicy.

One of the oldest cereals with almost 200 known varieties, Maize is the Indian summer crop which bring water in mouth of not even children but elders also. Though it’s popular for seasons like monsoon and winters. Bhutta or corn is the favourite snacks all over India –especially in rains. The fragrance of the roasted corn cobs and the taste of the roasted corns with lemon are out of this world! You can even have some salt and spices smeared along with lemons. Simple but amazing pleasure. And even the happiness that comes in family when all sit together and wait to have a bite of bhutta.

With bhutta there is also a dish popular in Punjab “Makki di roti teh sarson ka saag” that can’t be beaten by anything in wintertime. It’s an earthy hearty food abundant in favour, nutrients and colour: much like the land of the people it belongs to.

It is believed to have evolved from a wild grass that grew about 60,000 years ago. Christopher Columbus is said to have discovered it in America and introduced it in Europe from where it reached Asia. However, there are reference of maize been seen in India for much longer period prior to Columbus. The most popular theories suggests that the birth of maize is from hoysala Dynasty temples built between 10th and 13th in Karnataka.

The passion of Punjabi – A celebration with ancient roots, Lohri which is one of the main festival of Punjab. Without adding Makki di roti teh sarso ka saag, this mind blowing festival can never be defined complete and fully enjoyed. Makki di roti is the dish which is passed on from the ancient time and this is a flat, unleavened Punjabi bread made from corn flour, primarily eaten in Punjab region of Pakistan and India.

Makki di roti is a Punjabi word which means “Bread of corn”. A dish which is very difficult to handle because of less adhesive strength appears to be yellow in colour after being cooked. It is best known when accompanied with saga, Makkah and buttermilk in Punjab. The Punjab and Punjabi’s are known for this mouth-watering dish. Similarly, in Uttar Pradesh, it is eaten with spinach and added butter.

Remaining the lack of written recipes, it’s believed that it grew from the old villages of Punjab. Thus passed verbally over generation to generation, later in the year’s popular cook (yet to find) discovered the perfect recipe for the same.

The most interesting thing about any variety of maize (corn) is that it’s cheap, healthy and almost available in all the streets of India. It is one of the best snacks which is liked by everyone. As the Indian experimented the maize for various flavour. The so called maize also expanded its name over the years from maize to bhutta then to corn.

It’s not shocking to say over the years, the number of hawkers and the sweet corn consumption has increased. And not only for snack time but also movie that movie time is incomplete without having the best and the oldest thing that is popcorn in hand and even this has never gone out of fashion. The only thing that is new is that now a days is  we have different flavours of popcorn like caramel popcorn, cheese popcorn, tomato popcorn and of course normal popcorn.

A new addition to these varieties of maize which is serving as a main choice of the generation is steamed hot, tangy and spicy sweet corn kernels. After being mixed with butter, salt, chat masala and chilli powder, it is given to us in a small paper cup. Last but not the least, enjoy every dish of maize this monsoon and upcoming winters you should go out with family and try the dish you are in love with and you will feel that now your heart and even stomach is filled with new ideas and excitement.

The Shiitake Mushroom- A History in Magic and Folklore

Turkish Coffee – A Future Oriented Culture from the Past