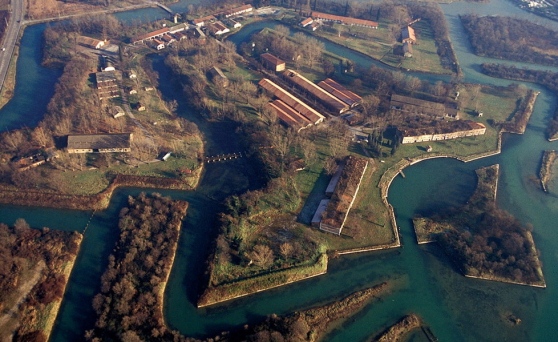 Forte Marghera was started at the beginning of the 19th century by Austrian military engineers, and was completed by the French Napoleonic army, as the main defensive facility of the city of Venice.

From 1814 the Austrian Empire gained the control of all northern Italy, Venice and Forte Marghera included. The Forte undertook many alterations, and was occupied by the Austrian garrison. A momentous year of European history was 1848: many cities, regions and countries experienced a series of insurrections and uprisings. The city of Venice expulsed the Austrian government, attacked and occupied Forte Marghera, while Austrian army kept the control on the close town of Mestre. Italian national history puts the stress on the <<Sortita di Forte Marghera>> (exit from Forte Marghera): on the 27 of October 1848, Italian military volunteers exit from Forte Marghera, entered Mestre and expulsed Austrian forces. This action was nevertheless of little consequences: after a few months, Austrians came back to Mestre, and started bombing the Forte: more than 70’000 bombs were exploded, and Italians suffered 500 casualties. Austrians definitively conquered the Forte on the 27 of May 1849, and entered Venice a few days later: the brief and glorious experience of the Republic of Saint Mark came to a bloody end.

From an architectural point of view, Forte Marghera is the typical 19th-century fort: it can be compared to defensive facilities Austrians built on the Austro-Russian border in Cracow region, and to the Strasbourg defensive network constructed by the German Empire. They all have huge barracks and casemates, and they are conceived for resisting to cannons and bombs.

Coming to Forte Marghera, we can see a double brick wall curtain: the inner circle has 5 bastions, and the outer has 7; each curtain is surrounded by a water canal, both connected to Venice lagoon. Today the site is open to the public during summertime, when art exhibitions take place in the barracks. A military museum has been several times proposed, but it still does not exist, despite the importance of the site for Italian national history.