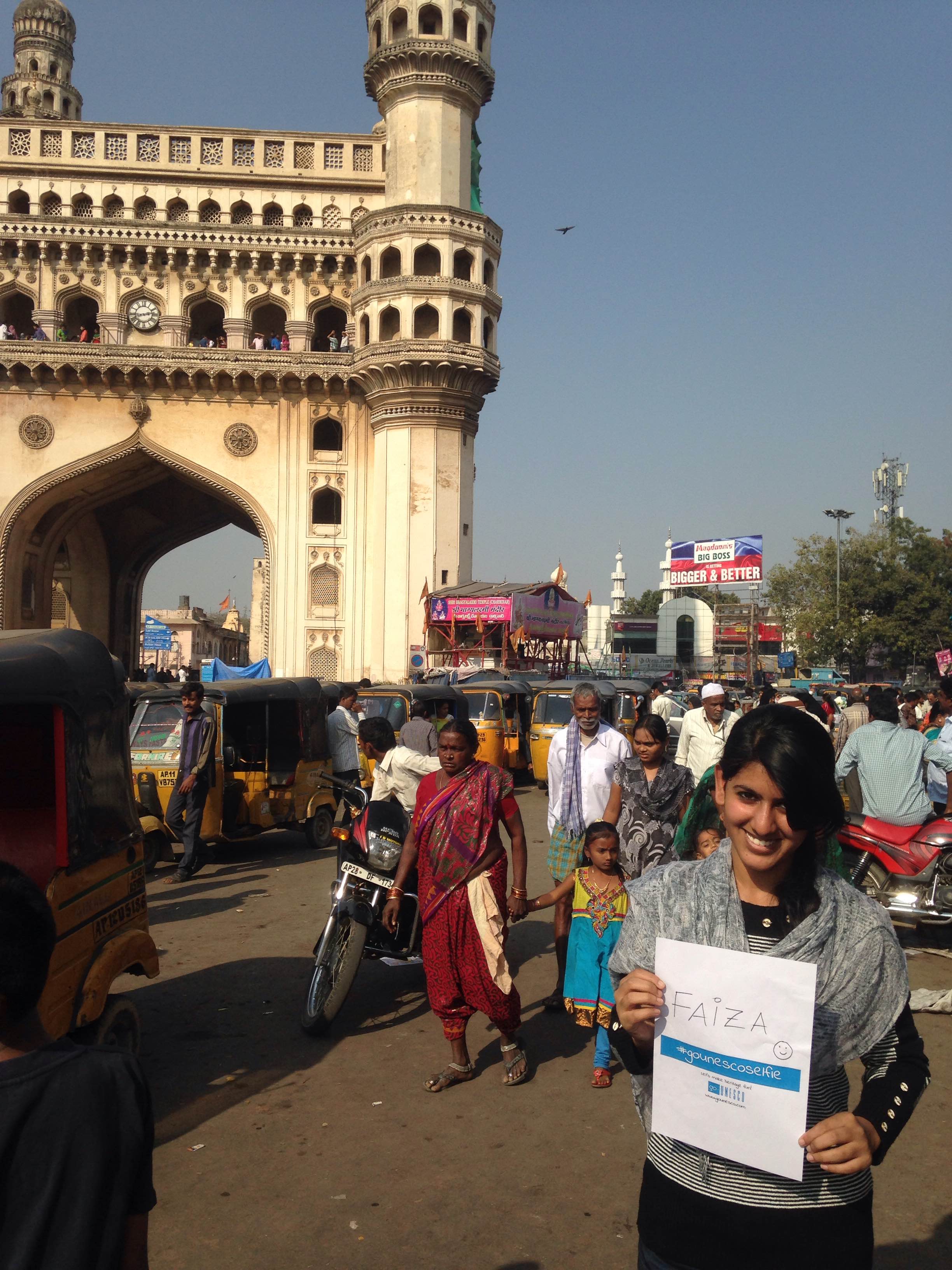 LETS DO THIS THE HYDERABADI WAY YAARO!

Think about Hyderabad and only three things come to a person’s mind- Yummy hyderabadi biryani, chunks of exquisite pearls and of course the one and only Charminar! And I have the privilege of living in this city which holds this iconic monument.

So in order to complete my #gounescoselfie task , I visited Charminar. Charminar literally translates as “the four minarets”  and rightly called so as it consists of four minarets one for each direction. Built in 1591 by Mohammed Quli Qutub Shah, the fifth sultan of the Qutub Shahi dynasty of India it is the perfect match of the Hindu-Islamic architecture. It is also known as the city of love, in honor of Mohammad Quli Qutub Shah who found the city for his beloved Bhagmathi and named the city Bhagyanagar after her. He later changed it to Hyderabad after his lady got the title of ‘Hyder Mahal’ (pretty cute love story)!

WHY EXACTLY WAS THE CHARMINAR BUILT?

There are various theories regarding the purpose for which Charminar was constructed. However, it is widely accepted that Charminar was built at the center of the city, to commemorate the eradication of plague, as Muhammad Quli Qutb Shah had prayed for the end of a plague that was ravaging his city and vowed to build a Mosque at the very place where he prayed. According to the book “Days of the Beloved”, Qutb shah constructed the Charminar in the year 1589, on the very spot where he first glimpsed his future queen Bhagmati, and after her conversion to Islam, Qutb Shah renamed the city as “Hyderabad”. Though the story was denied by the historians and scholars, it became popular folklore among the locals.

MY EXPERIENCE MEANDERING THROUGH THE CHARMINAR AREA:

It was truly an amazing experience going and visiting the Charminar. The area is surrounded by the Laad Bazaar, Pathergatti, Kotla Alijah Road and Charminar Road bursting with shops which can be seen once you reach the first floor of the monument. Just a small climbing of about 162 stairs is at it takes 😉 Looking out to the North and I’d spotted the Mecca Masjid. One of the oldest mosques in Hyderabad, this too was built by Quli Qutb Shah with bricks and is said to be made from the soil of Mecca. Now that I’d reached there it was time for me to go exploring.

As soon as I entered the  Machli Kaman area before Pathergatti hangs heavy with the smell of natural perfume oils called ittar. Shiny glass bottles with yellow and brown liquid line the shops, often coupled with a silver case of  surma. As I was walking down the street I noticed that the shops change from bottles to strings of pearls. This is where Hyderabad pearls first became popular: Mangatrai and Kedarnathji Motiwale  ̶  both over a century old  ̶  are the most credible destinations for some pearl shopping. Next time you think of buying pearls, make sure you give these places a visit! Northeast of Charminar, Laad Bazaar is decidedly for the ladies. Ladies once get in here take hours to get out. Literally! Shops packed with lacquer bangles studded with stones, and other trinkets, have the women making a beeline for this wonderland. Here, you can also get any imaginable item needed for a Muslim wedding. Clusters of excited abaya-clad women, hunched over the goodies, break the bright mural of colours. Forget malls  ̶  bright, crowded and bustling, this is how you were meant to shop!

Since I’d visited the Charminar during the lunch hours , I decided to have my lunch at the Pista House. If you ever get a chance to visit this area then dont miss the staple chicken biryani here. You can never go wrong with it ! And if you’re lucky enough to be arriving at the beginning of Ramadan, you will see big brown pots ready to brew haleem, the mouthwatering meaty concoction.

I had a wonderful experience and learnt more about my area during this task 😀 Hoping to explore more in times to come.
-A Proud Hyderabadi!

Tughlaqabad Fort and its Crumbling Ruins