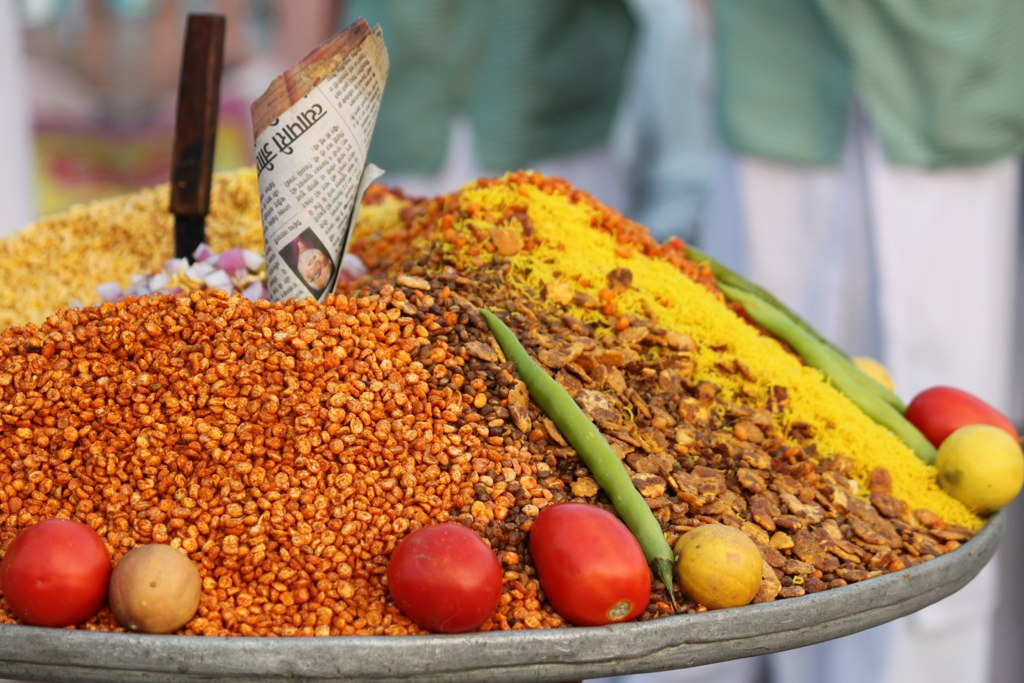 If there is one thing India thrives on, other than Bollywood and Cricket, it is the Indian Chaat.

It is late evening and the air is heavy with smoke. The dingy streets are crowded with people, returning home from their day’s work. There is nonchalant chattering mixed with vehicle horns and vendors yelling out prices. There’s chaos everywhere. The constant buzz and the movement hardly seem to bother you. There’s an urgency in your steps and your mouth is salivating at the thought of it. You finally reach the destination where people are huddled in small and large groups for the same purpose as yours. And then you finally get to say the magic words, “Bhaiya, ek plate chaat dena.”

What is a chaat?

A popular cook, William in the British regiment,  was determined to discover the perfect recipe:

Owing to the lack of written recipes in India, as they were passed on verbally from generation to generation, William ventured to find out the recipe of bhel puri, a delicacy that has earned the fancy of a certain high-ranking British officer. He went from door to door in the quest of finding a recipe, but he got a different one each time. After a long tiring day,  he went back to the expecting officer and told him rather disappointingly, “we’ll have to stick to french fries again tonight, Sir!” The officer got so furious, he took out his gun and shot poor William, causing a mutiny among the barracks soldiers.

The origin of chaat is often debatable. Some say it comes from Gujarat, however, the more popular theory suggests that the birth of chaat took place in Uttar Pradesh during the reign of Emperor Shah Jahan. According to legend, once when Shah Jahan fell sick, he was advised by the Hakims to eat something light, but high on spices to strengthen the immunity, and incidentally, that’s how chaat was discovered. From the Mughal Emperor’s kitchen, the concept of chaat then went on to find its place in the lanes of Old Delhi, Gujarat, Bihar and soon became a pan-India phenomenon, with different names, tastes, and flavors.

If there is one thing India thrives on, other than Bollywood and Cricket, it is chaat.  Like how the language changes every 100 kilometers in India, so do the ingredients of chaat. Touched by local flavor and spices, chaat is  a gastronomer’s favorite.

Another fascinating thing is the chaat’s universal appeal. Take a walk across shabby lanes or walk into a top-notch restaurant, this sassy snack makes its presence felt everywhere. Known as paani puri  in Western India, golgappa in the north, puchka in the east,  chaat is enjoyed across different cultures in India.

Even with the CCDs Baristas and pizza huts opening up in major towns and cities, the love for street food hasn’t declined. In fact, most multinational eateries today have introduced the local chaat in their menu. A popular example is the McAloo Tikki burger at McDonald’s.

It isn’t surprising how so many chaatwalas in India have had their rags to riches moment. Kalyan Bhel, a popular name in Maharashtra, started out a few decades ago, with a street stall, today has air-conditioned branches across Pune. Likewise, Elco Paani Puri, a chaat maker that has been awarded the best Paani Puri award in Mumbai by CNN Travel.

From the streets of Chandi Chowk in Delhi, its dahi bhallas and aloo tikkis, to the bhel puri at Chowpatty in Mumbai, to the iconic SPDP (sev puri, dahi puri) of Pune, to the mouth watering dabelis of Gujarat to the litti chokha of Bihar and what not, the Chaat truly represents and celebrates the diversity of India unlike any other.

Byzantine Relics in the Historic Island of Crete