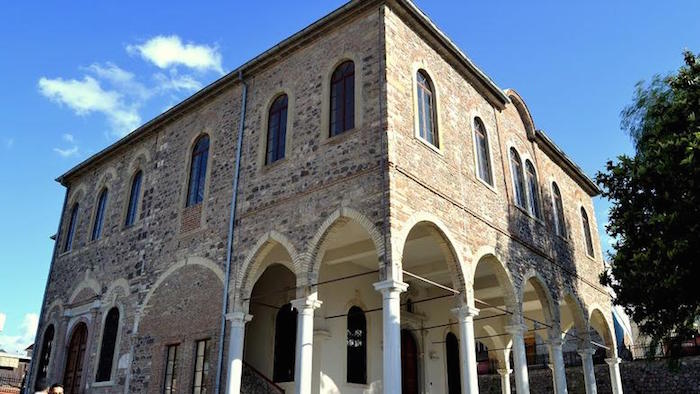 Few know that in Izmir exists an Orthodox church that was rescued from Turkish atrocities during the Asia Minor Catastrophe, when the city of Smyrna was in flames and the Greeks took the road of exile. Note, this temple was built in the second half of the 19th century by the Greek community of Smyrna and was the sole Greek Orthodox church to survive a fire in 1922, a major event in Izmir’s history.

St. Bukla, the first Christian bishop of Smyrna, who lived in early Christian times in the early 2nd century A.C was a student of St. John and before dying, appointed as his successor martyr Polycarp, who was to become the patron of Smyrna. His tomb is believed to be in the courtyard, and

his memory is celebrated on February 6.

The history of the church changed after the Catastrophe of Smyrna and two years after the church was converted into a museum by Kemal Ataturk’s command and later used as a venue for rehearsals in operas.

In recent years, the Turkish state allowed the renovation of the church, who was rescued from destruction and collapse through concerted actions. The restoration work uncovered images of Christ, St. John and the archangels Michael and Gabriel inside the temple.

Izmir Mayor Aziz Kotzaoglou stressed among others in earlier statements that ,”The restoration work revealed many images that will certainly contribute to the revival of the historic fabric.” The church will be used as a social and cultural centre.

This is an important initiative that may not restore the church to its original use as a church, but the rescue of the demolition that was very likely due to its abandonment. However, this hurts the feelings of the Christian community of Izmir (and not just that community).

What we can learn from Yorkshire Wensleydale Creamery

Heritage and education: The GamoGofa zone in South Ethiopia