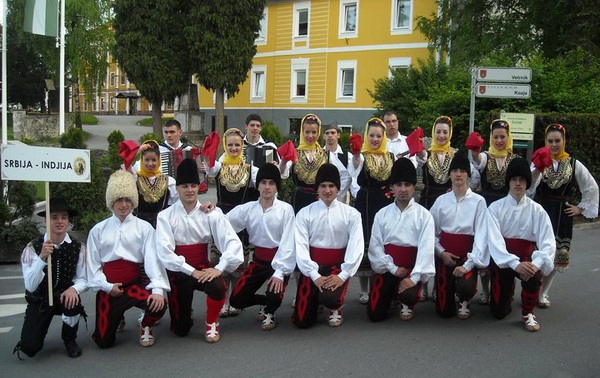 When we think about the intangible cultural heritage in form of performing arts in Serbia, the first that comes to mind are the traditional dances and songs. Nurturing the folk tradition is widespread in Serbia and the numerous Cultural – Artistic Societies (KUDs – ensembles of folk dances and songs) have the most prominent role in preservation and presentation of the folklore. Almost every city, town and village have one or more ensembles of this kind. In general folklore heritage is very similar to the all peoples of South-East Europe, because the nations in this region mingled and influenced each other for centuries, but each country has its own specifics, as well as regions within a country. So local KUDs put emphasis on the specific characteristics of their region.

The municipality of Inđija has nine Cultural – Artistic Societies. But the two of them have the longest tradition: Serbian KUD “Soko” (meaning Falcon) from town Inđija, established in 1948, and Hungarian KUD “Šandor Petefi” from village Maradik, established in 1950. KUD “Soko”, beside to folklore from all parts of Sebia, especially cherishes the traditional songs and dances from Srem (county in Province of Vojvodina) and from Kordun (region in country Croatia). After the First and Second World War a large part of population from Kordun have been settled in Srem, especially in municipality of Inđija (ancestors of my father were among them). Preservation of intangible cultural heritage, transferring it from generation to generation, is one way to preserve the memory of own origin and identity.

How Province of Vojvodina represent the multiethnic society, fostering cultural equality is very important part of cultural policy. The population of Vojvodina make Serbs, as the majority population, and ten minority nations. KUDs of minority groups are very important to maintain their culture, traditions and language, which together keep the richness of diversity. This role has KUD “Šandor Petefi” from Maradik in preservation of Hungarian intangible cultural heritage. Hungarians are the largest national minority in Province of Vojvodina, as well as in the municipality of Inđija. KUDS “Soko” and “Šandor Petefi” are example of the beauty of this national diversity in municipality of Inđija and exist side by side for over the half a century.

An important part of the activities of these Cultural – Artistic Societies, in addition to nurturing traditional dances, music and songs, is preservation of traditional costumes, which are an integral part of folklore heritage.

Streets are alive in Tokyo!

Swirling to magic in a tarantella