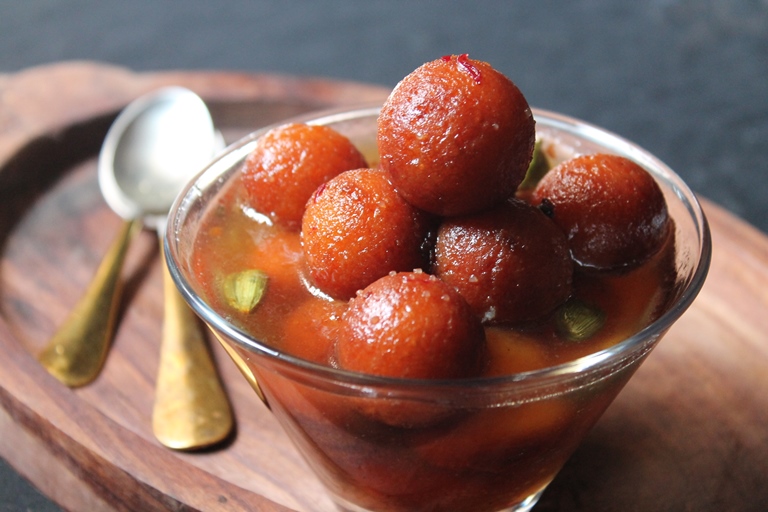 The gulab jamun is decadent in its level of sweetness. It is one of the most indulgent Indian desserts.

When I think about Indian food, I unconsciously start thinking of  very spicy food. I thought I would end up cooking something very spicy for this task, but was surprised when I suddenly ended up making the ‘gulab jamun’, which is pretty much the antithesis of spicy. This was not only the first time I had cooked an Indian dish, but also the first time I had tasted one. The experience of creating and consuming was definitely one that piqued my curiosity.

The history of  the “gulab jamun”

“Gulab jamun” is a dessert that dates back to medieval India. It is derived from a fritter that Persian speaking invaders brought to India. The etymology of ‘gulab jamun’ is derived from the roots ‘gol’ (flower), ab (water) and ‘jamun’ (a round Indian fruit). This is because the dish is essentially composed of round pieces of mawa and flour immersed in saffron flavored ‘syrup.

The indulgent, sweet flavour of the gulab jamun can be considered a marker for its Persian origin. It has come to be one of the most famous Indian desserts, and is often cooked at marriages and festivals in large quantities.

How to do: My Gulab Jamun Recipe

The first thing that I did after I saw the recipe was to see whether the ingredients were locally available. I went to the market to search for the raw, organic variants of cardamon and saffron, but was only able to find powdered forms.

For preparing this dessert, one requires three base items: mawa, sugar syrup and saffron

For the preparation of the “mawa” I had to boil one litter of full cream milk in a non-stick pan. It is necessary to cook it over low flame until it turns thick and there is no liquid left.

Then, I prepared the saffron flavored sugar syrup by adding 1 ½ cups of sugar, 4 green cardamoms and a a teaspoon of saffron into a stew-pot. I then added 2 1/2 cups of water to it and let it boil. It slowly acquired a sticky texture, in around 15 minutes.

Image courtesy: Elisabeta Kodheli Me and my friends eating jamuns

I prepared the jamuns  by mixing the mawa, 1/8 teaspoon baking soda and ½ cup of flour in a vessel. After adding,  I mixed them together until  a smooth dough was formed. I divided it into 10 equal parts, by greasing my hands with oil to create smooth, perfect spheres from it.

I then added oil in a pan over a medium flame. When it became hot, I put the dough balls into the pan and fried them over a low flame. They soon took on a brown colour. I added the spheres into the hot, saffron flavoured syrup and soaked them for about two hours before me and my friends tasted them.

Since, this was my first time cooking an Indian dish, I was quite nervous. Both me and my firends knew that cooking was definitely not my cup of tea. This made us significantly lower our expectations about the taste of the dish I prepared.
Despite our fears, we were pleasantly surprised after tasting the dessert. In fact, some of my friends even asked me for the recipe! It was good to have a taste of the East, and it turned out to be a welcome addition to Sunday’s dinner.

A Food Trail through Bangalore