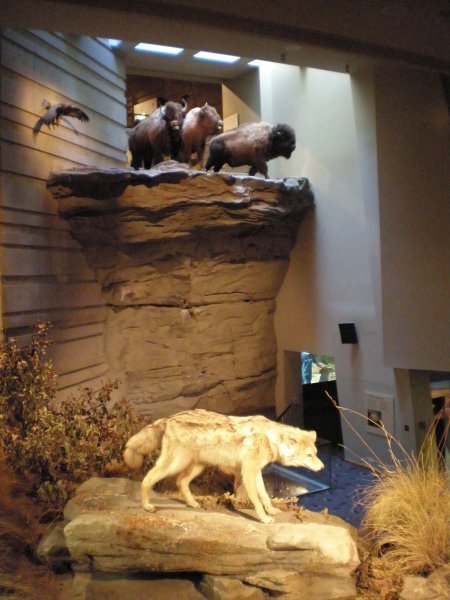 Head-smashed-in buffalo jump is known around the world for its remarkable testimony of prehistoric life, an archaeological site known around the world as a remarkable testimony of the life of the Plains People through the millennia. The site bears witness to customs practiced by native people of the North American plains at HSIBJ for nearly 6,000 years. With their intricate knowledge and excellent understanding of topography and of bison behaviour, they were able to kill bison by driving them over a precipice. Carcasses were carved up and processed in the butchering camp below.

Interior: Skylights over the ecological and buffalo jump displays provide natural light. The building’s interior has a series of terraces on which the displays are arranged. Elevators and stairs take visitors to the top of the building where they can overlook the panoramic plains. Stairs allow visitors to descend through the exhibits and theatre to the main floor and gift shop.

Exterior: To give the impression the building was created by erosion, its exterior closely resembles the surrounding rock outcrops in colour and texture. This theme of subdued sandstone hues is reinforced inside the building. Outside the Centre, visitors can walk to an interpretive node, overlooking the jump site, or take a walk in the shadow of the cliffs on the lower trail.

The Frontiers of the Roman Empire