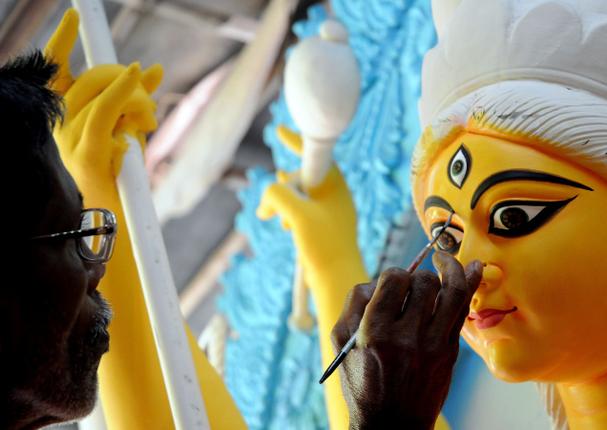 Kumartuli, a neighborhood in Kolkata, India holds an important place in history which has a long tradition of clay idol-making along with a strong association with the most important festival of Bengal – Durga Puja.

It is located in north Kolkata along the river of Hooghly. It has grown into a trade and contributing towards the livelihood of many people. Apart from this occupation, there are services which support this industry to a large extent. With the rapid expansion of the city of Kolkata, this area has undergone a huge transformation – mainly due to urbanization.

The artists or Karigars who are involved so passionately in crafting idols from raw clay to an idol of a god and goddess, work in their ‘workshops’. These workshops as they are called actually comprises of working space, storage space for idols, storage space of raw materials, eating, cooking and sleeping space of karigars. It is a place where Karigars or labours work and live in the same space. The built environment of this place is majorly the workshops linearly planned along the narrow lanes as well as the shops where accessories for idols are sold and residences of artists.

To understand built heritage, it is important to develop understanding of ‘Heritage’ that can be defined as inheritance from our past and shall be passed on to our future generations. Therefore, it becomes a chain process of transference from generations to generations.

By the author: Intangible cultural Spirit of Durga Puja

Heritage is multifaceted and comprises built heritage, natural heritage, cultural heritage, and the list goes on. Built heritage can be comprehended as man-made physical built environment comprising of buildings, group of buildings, structures, monuments which has an historical and architectural significance. They stand as witness of gone era which is important part of our history that needs our care and attention.

Since our Indian history is one of the earliest surviving civilizations therefore we find endless heritage in terms of natural, cultural, built, art and crafts, music and dance, etc. Also India has witnessed many invasions in past which has influenced the tradition, culture and architecture, and gradually helped in shaping our present culture.

A typical workshop of the karigars at Kumartuli is a linear rectangular room with an entrance facing the road or the lane. As you enter the workshop, there are rows of idols stored on either side. The walls are of bricks and slopping roof of tin shades supported on bamboo truss system and has mezzanine floors. The height of these workshop ranges from 18 feet to 20 feet. Very few units have conventional staircases while the rest have wooden or steel ladders. These structures have temporary roof because the artist and karigars usually come to these workshops only before Durga Puja to complete their work.

This practice was followed till the British shifted their capital to Delhi. Thereafter, the urbanization resulted in the place of work being transformed into permanent residences and workshops.

The art of idol making is a unique and requires creative imagination skills with a long process. It is an important part of cultural practices for any culture and cannot exist without the tangible component. The art exists only when people involved have the passion to continue their art as a tradition along with the changing demand of time, as examined in the case of Kumartuli in Kolkata. The essence of built heritage lies in the interrelationship of its people, place and their activities.

The work usually starts with ‘garanlkathamo puja’ a puja on the day of Rathayatra when they worship the tools along with Lord Ganesh and Goddess Laksmi. Depending on the style of Idol like Ekchala or other, the structure is prepared. The accessory that goes over the idols are equally important and acts as supportive art.

Therefore we can classify the process of idol making broadly into three stages:

Today, these activities are still practiced during the process of idol making at Kumartuli. The livelihood of people associated with this dependent on this. But unfortunately, the lack of basic amenities, poor infrastructure and the lack of free space are some of the major issues faced by these artisans in Kumartuli. The lanes or streets are very narrow because these are occupied by newly constructed idols as the space inside the workshops isn’t enough.

This built heritage in Kumartuli has now turned into an urban slum which is degrading with time. And to further prevent its regeneration, it needs an urgent attention to identify it as a significant part of our living heritage.

Fire Dance by Bassar people in Togo and Ghana

The Mystery behind the shadows of Elephanta caves