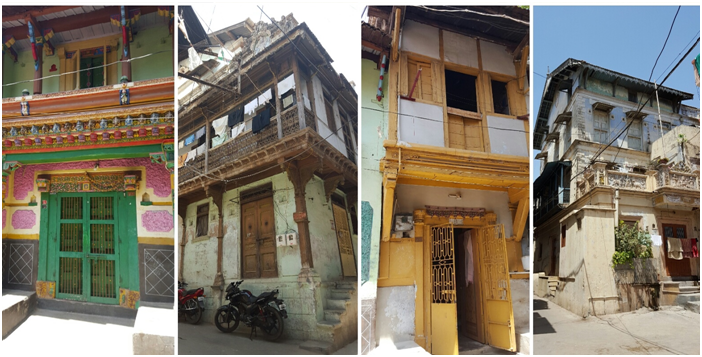 With more attention being bestowed on heritage nowadays, almost everyone has become aware of famous places like the 70’s kihaveli, an Indo-Saracenic cinema house or the king’s grand palace in town. Yet many are still unaware of the architectural historicity of the inner cities, especially many students in the design field. The buildings of and by the common man (read: those not mentioned in history books) in these parts of town exuberate an old world charm, but in reality, little is known about these places.  Having studied in one such city, whose architectural history has never been documented thoroughly, going back there to teach a matter close to my heart was exciting and unnerving at the same time.

Anand, situated in Gujarat, India is more famous for the White Revolution, AMUL and non-resident Indian population have a plethora of absolutely stunning buildings.

Now as an architectural conservator, I must admit that my knowledge of these structures (before I completed my undergraduate degree) was just as narrow as the students I taught over the past few months.  So before this foray into academia, all I had in mind was how to make the subject of conservation more interesting and hold their attention to all things historic.

The head of the college and the teacher who got me interested in the subject was now the core lecturer and I was the associate visiting professor. We began with the basics and taught via conversations, by sharing anecdotes of our time in the field. This ensured it remained interesting as this isn’t a conventional course you would find in other schools of architecture and interior design. Thus, it gave us the freedom to change direction depending upon the student’s response.

A few buildings earmarked on one of the student teams’ heritage walk in the old city of Anand (L-R) The DwarkadhishBethak Mandir, SardarVallabh Patel Tower, Swaminarayan commercial building, and entrance gate to Post Office Faliyu

To make the students aware of these architectural gems, their first exercise was to select buildings that represented the essence of the common man’s history that had not yet been documented.  Studying these, a question arose in many, as to why Anand and its environs were not as celebrated as nearby Ahmedabad or Vadodara.  Now understanding the importance of local architectural features and buildings we pushed them to explore further.  They visited world heritage sites like Champaner and went on heritage walks in cities like Ahmedabad.

For the final project, which led to this article, all we asked them was to identify heritage routes for Anand city, Vallabh Vidyanagar and Karamsad where in the future a walk could be proposed.  As understanding of their contextual history became clearer, the students started becoming excited and took it a step further by creating virtual tours of their proposed walks. They hinted that this could then be considered as having laid the founding stones for any future endeavor.  All gung-ho about it, and with a clear green signal, their end products were met with a positive response from other faculty members.

Although a lot more work needs to be done, it was heartening for me to see that despite it being their final year and with a thesis looming in the background, the future prospects of it becoming a tangible program pushed them to produce good quality work.  As a constant supporter of efforts, the entire process at the end was an equally satisfying experience for me, and I can’t wait to continue this into the next semester.

The students presenting their final work- a virtual tour of the walks they designed. Pic Courtesy:Author’s student, Krishna

As an end note, someone asked me, “What was it like to teach interior design students, heritage conservation in India?” I didn’t know the answer then.But now I can proudly say: one needs not to be in the architectural field to appreciate and work for heritage.

Wishing we could celebrate International day for monuments and sites every day!

The author, Ar. Swapna Kothari is a Visiting Faculty, at the S.M School of Studies and Research in Architecture and Interior Design, Gujarat, India. You can know more about her at swapnakothari.wordpress.com