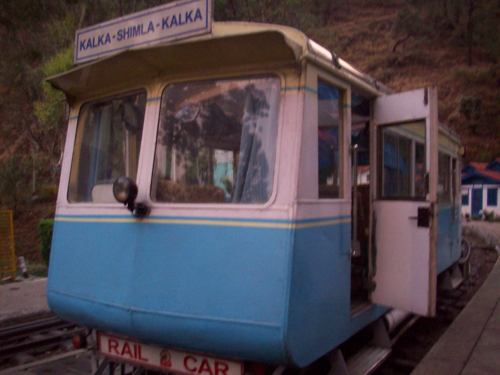 Before I even start blogging, I would like to thank Sridevi garu, IRCTC (Now that’s called tatkal, one day before), Google maps, Just dial, pay and use toilets and all the people who were woken up by me at 7:55 on most of the days when I was travelling for the tatkal tickets. What would I have done without all of you, no really :P. 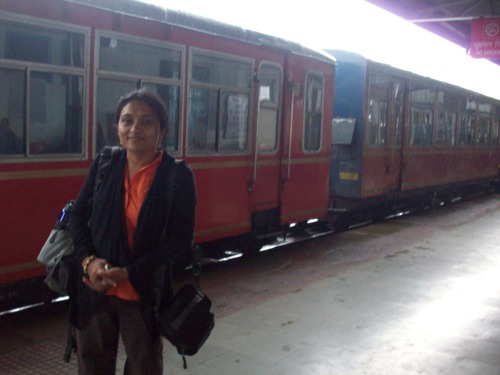 After a two day stay at a resort 30kms away from the main town, Shimla which promised us “royal view”, a long trek,horse riding,lots of happy pictures, spotting white leopard garu, singing ‘mayadari maisamma’ (a popular telugu song) as loudly as we could at an altitude of 2000 odd meters making every Telugu bidda(son) proud Sridevi garu (SG from now on for pure convenience and nothing else) and I started off to one of the most beautiful UNESCO identified heritage sites of our country – The Shimla – Kalka Railway. 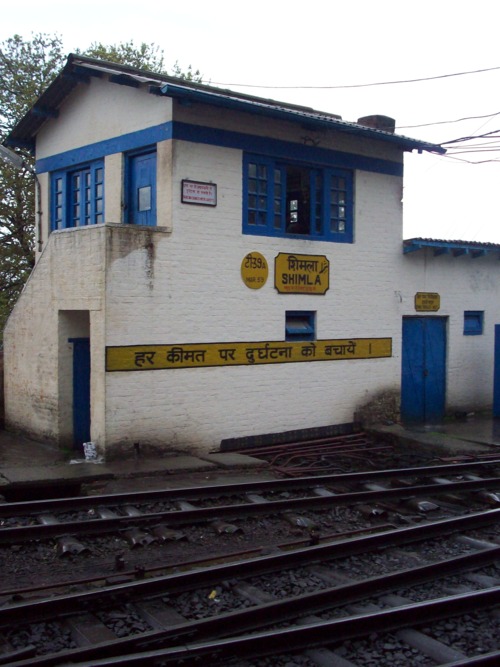 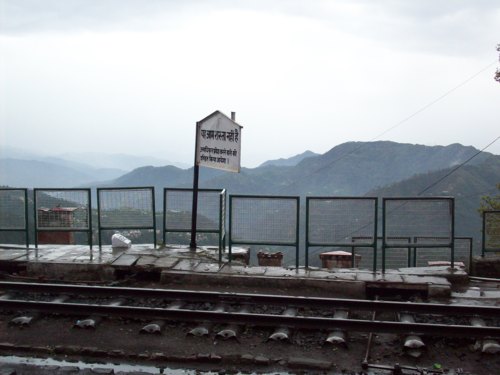 On our drive to the Shimla station, our chatty driver wanted to know where we were from. I said “Guess karo aapko three chances milengey” (“Try and guess you have three chances”)Through out our Shimla trip whoever we made friends with 1) Our driver 2) The trek guide 3) The friendly waiter – we asked them to guess which part of the country we were from. All of them could say South but didn’t manage to tell which language we were speaking. This clever fellow asked me which IPL team I support :O Thanks to IPL they atleast know that there are 4 different states and NOT all of them( the people living below Maharashtra) are from Madras and not everybody speaks Tamil.

Note to self – 2: Gyan and opinions. Everybody and anybody gives you free gyan.

He was not very happy with our decision of sticking to our original plan.After giving us a set of ‘to- do’ instructions he dropped us off at the Shimla station.  It was quite cold for an April afternoon. Me with my super planning managed to carry NO winter wear while SG, the THE super planner was nicely covered in warm clothing. She made some magnanimous gestures like sharing some extra tiny stole which she claimed was from Kashmir and as good as a shawl , trust me it was of no great help.

Note to self – 3: Know about the weather in the place you are travelling to 😐

To keep warm we had nice chai at the railway canteen and headed to the ladies waiting room.Our train was supposed to start at 4 PM.The supervisor lady asked me some very pertinent questions(like my mom always manages to do) like – why am I not wearing anything warm? Why are we travelling alone? Why are we taking pictures of ‘chai glasses’? Why are my parents not around? Who is this lady travelling with me? She even smirked at me when I said “Its fun to travel like this”. I am so sure at that point in time she gave me a look which said ” I do not want my daughter to grow up like her”.

Note to self – 4: NO. Do not over act. Not everybody likes super enthued happy kids.

Anyway, she told us that the train was on the platform. We said we just came by and didn’t spot any train. She smiled and asked us to go check. We did. She was right. We realised why we couldn’t spot it – it was a 15 seater!!! Just 15 seats :D. 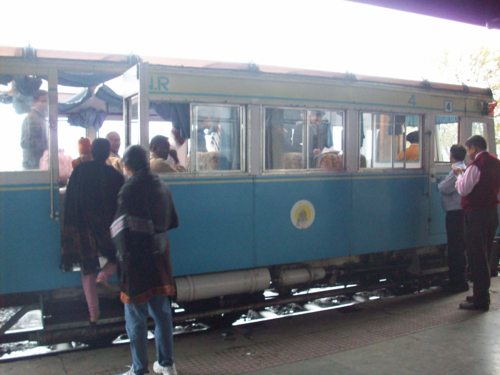 Lovely! I liked the train already 😀  Promptly, I took out the newspaper and managed to get  some “mandatory” clicks for the trip and boarded the train. Took off some happy pics to post on FB (such pressure to perform) and sat in our respective seats. SG and I did not get adjacent seats. SG chose to give up her window seat for me. Such display of loyalty is overwhelming I tell you. I got anandabhashpalu [tears of happiness :P] And that girl?  The girl SG gave her window seat to?She slept all through the journey!!. How much SG regretted having given away that seat and how? She must have repeated some ten times about her act of charity going waste :P.

The first thing I noticed as soon as we settled in our seats was the transparent roof. It reminded me of the song Urvashi Urvashi from the movie Premikudu (do not know that song? Oh no! Youtube for it right away. Brilliant song it is!).

The train was funk, yes funk is the word. It was a 15 seater with a nice gradient chart showing the stations and the altitudes – if it were a 5 marks question ka answer I would have given it 5+2; 2 extra marks for neatness 😛 There was a small driver’s cabin to one corner and two doors. That’s it! 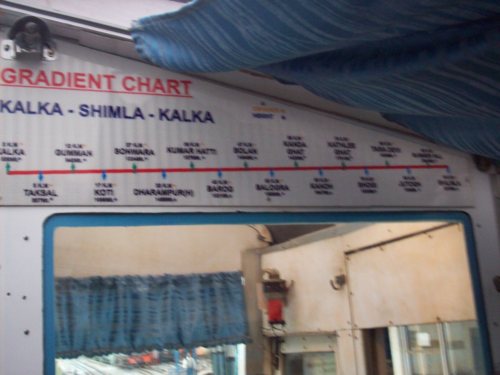 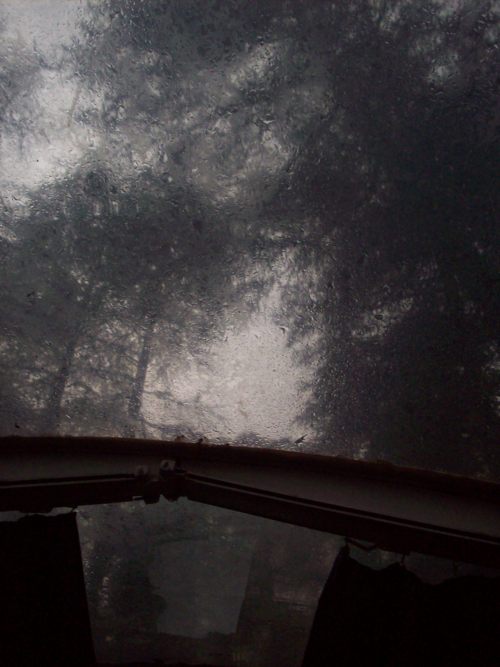 It did not take us long to realize that all the 15 passengers were South Indians :O

One Mallu family living in Chandigarh, it was one of those summer vacation trips with their kids. Then there were three retired Tamilian uncles from Benguluru who had so many stories to share with all of us. They were making a ‘oh – post – retirement- we can- do- whatever- we- want- to’ trip across the North of the country. There was another small family – wife and husband along with their small baby girl who managed to wave at all the stations. One attender bhaiyya ji ; SG and me.That’s it 15 of us.

The journey was lovely! 96kms in 5 hrs 😀  We were travelling down the slope, so it was supposed to be faster.  It was like different screensaver images are changing one after the other at the windows. Beautiful!! Tunnels after tunnels. We tried clicking as many pictures as we could – felt like capturing all that we could see outside. After a while, we got tired of clicking, we decided to just sit down and enjoy the ride. SG and me spoke a lot of ‘kashtasukhalu’ (Sorrows and joys of life!) 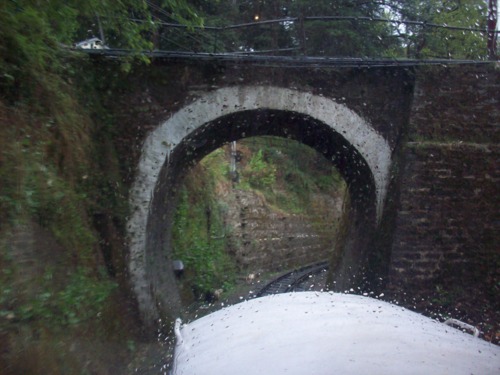 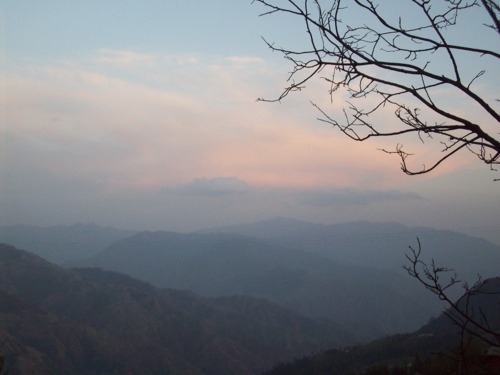 After a while, I went up to the front of the chair car to experiment with my photography skills(blah with my digi cam? whatever). I smiled at the driver. He ignored me 😐 But I being I, I went upto him and said “Hi, aap is train ke driver ho”  like reallly ?? I couldn’t think of anything else under the sun to ask him? 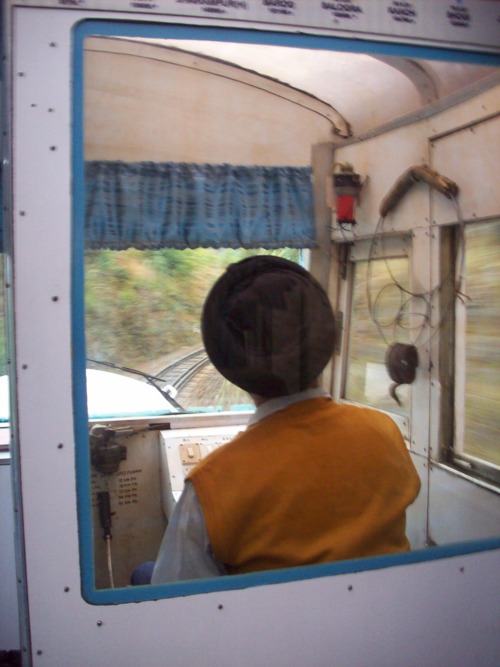 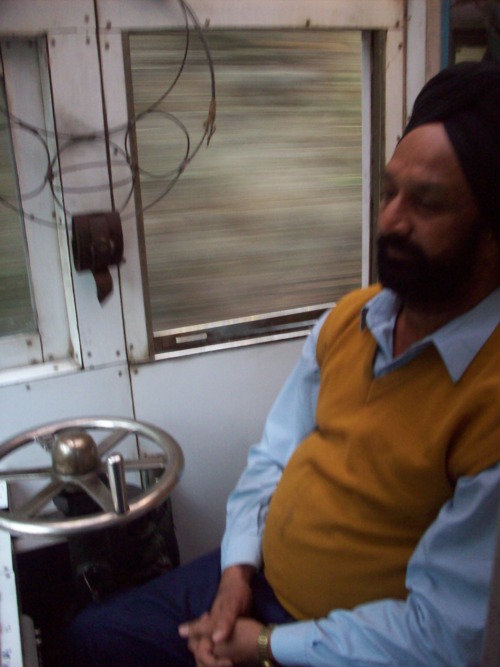 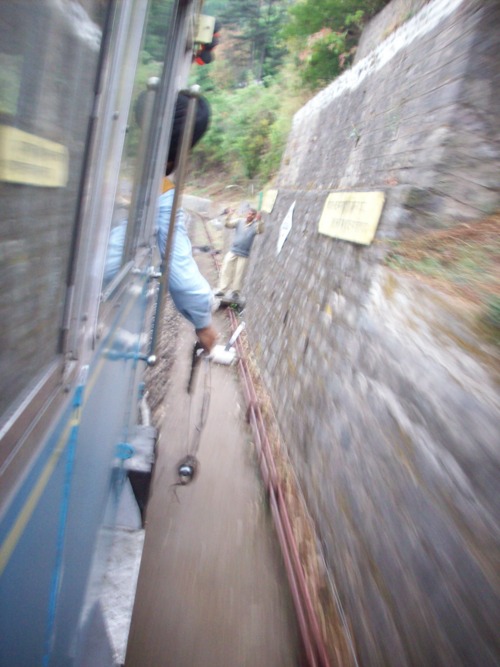 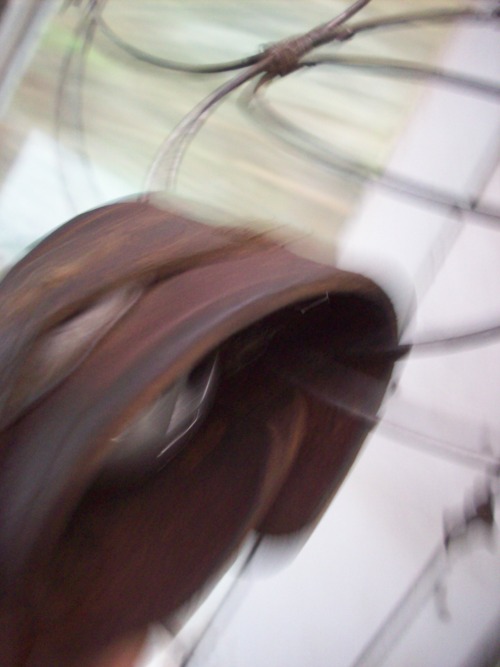 I noticed one huge ring with a small metal ball in it, placed above him. He happened to give away this ring to a person at every station who in turn gave him another new ring, which he promptly placed on the ring stand. I asked him why was he doing all this. He explained the entire process to me.

There is a token number on the metal ring and he has to note down that number and the time in a file maintained by him. He showed me the file too. He mentioned that this was the mechanism through which they used to keep a track of timing and stations crossed in the olden days. They chose to follow the same even now to retain the ‘old – heritage’ value. Only if the other person stationed at these stations gives the ring can we leave the station it means there is no signal to leave the station yet.

Heavy co-ordination I must say!

I asked him for how long has he been driving this train . He said “Abhi kya bathayein aapko, bahut saaalosein. Bahut hi badiya hein. Bahut saarey log aathey hein aur acha lagtha hein chalaney mein. Kahin foreigner log bhi aajathey hein. Mast lagtha hein ji unke saath photo shoto lena” [ What do I tell you? from many years. I really like it. A lot of travelers come, it feels good. A lot of foreigners also visit, feels nice to click photographs with them ]

I got back to my seat and started looking outside. It was getting dark by 6ish.We halted at this station called ‘Barog’ for a snack break. This station has the UNESCO board and information about the rail track. They have a very nice canteen.It is a very well maintained station I must say. People carried back yummy (I haven’t tasted, it looked yummy) omlete pav, maggi etc.Aaaaaha!  I wasn’t hungry at the station BUT I  felt like eating after getting into the train 😐

Note to self –  6 While travelling, when you see a nice/neat food joint or a decent toilet; just get done with your job. It always ALWAYS happens that you will regret later if you do not 😐

After 7ish we couldn’t see much outside, we just lifted out heads up and saw through the transparent roof. The stars – so many stars!! I don’t remember when I last saw so many stars 🙂 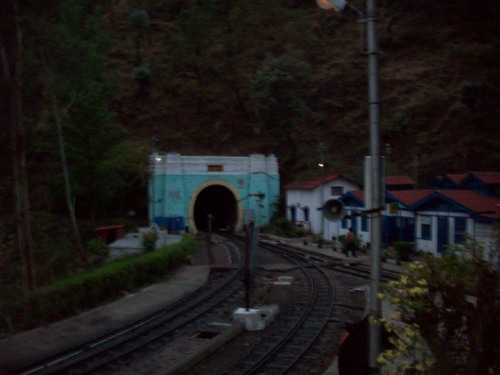 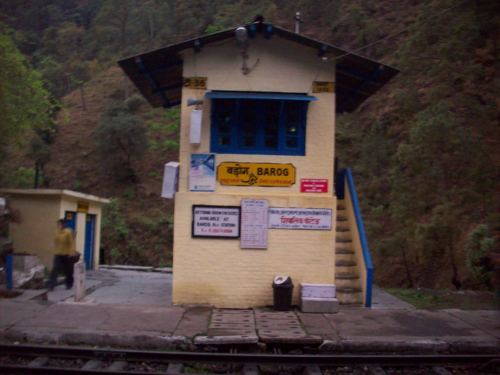 I was loving the journey, from the ‘I -don’t -know-usage-of -which-word -will -do justice’ scenic views of the valleys and mountains to the stars through the transparent roof – the song which was on my mind was

Gulazar Sahab’s ( Lyrics courtesy : Google search – picked up from the first link that popped up)

Hat’s off to you Sir. Waaaattay song!

I didn’t realise when I slept off 😐 SG woke me up saying we reached Kalka at around 9ish. 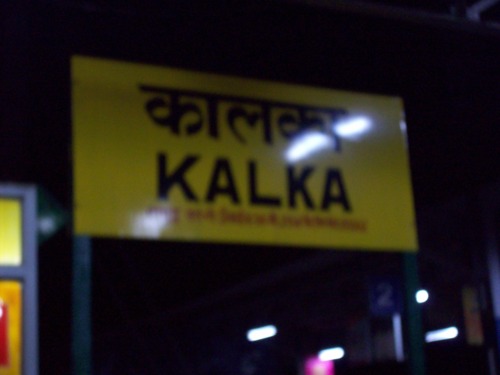 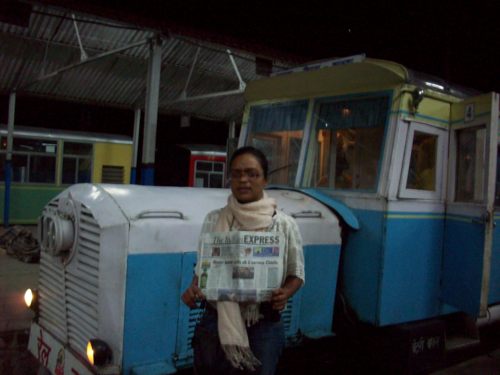 We got off the train and again clicked pictures with the train and the newspaper!! What to do “safer side”. We headed to the railway canteen, and wondered why didn’t they give us some funk tickets – Old vintage like – ‘I want to preserve this ticket’ kind of tickets . They should have. It is so doable. Anyway, we ordered for veg thali and got back to planning the next day –  thinking who should we wake up for the tatkal tickets 😛

Note to the ones who would want to visit this UNESCO identified, more than a hundred year old railway route :

I am sure I couldn’t express what exactly I felt like on the train. You should take the ride to know how beautiful it actually is! Trust me, it is one of those ‘must do’ trips

https://www.gounesco.com/heritage/proof/23220271825-shimla-kalka-railway/https://s3-ap-southeast-1.amazonaws.com/gounesco.com/wp-content/uploads/2012/05/17083000/tumblr_m4438gupu71rpxk69.jpghttps://s3-ap-southeast-1.amazonaws.com/gounesco.com/wp-content/uploads/2012/05/17083000/tumblr_m4438gupu71rpxk69-150x150.jpg2012-05-17T09:30:00+05:30Shravya KaparthiUncategorizedgounesco,himachal pradesh,india,Kalka,railways,Shimla,Shravya,train,travel
Before I even start blogging, I would like to thank Sridevi garu, IRCTC (Now that’s called tatkal, one day before), Google maps, Just dial, pay and use toilets and all the people who were woken up by me at 7:55 on most of the days when I was travelling...
Shravya Kaparthishravya.gupta@gmail.comProof_userGoUNESCO | Go UNESCO
Categories: Uncategorized. Tags: gounesco, himachal pradesh, india, Kalka, railways, Shimla, Shravya, train, and travel.