Reached Delhi early in the morning at 4 Am.

My stop over at Delhi was worth every minute,was lucky to get checked into The Taj Mahal Hotel on Mansingh road.Had a nice sleep after tiresome journey,got back to my work related meetings and happened to meet the Great Indian Industrialist – Mr.Ratan Tata!!!

While I was on work,Sriram completed the Simla-Kalka Train journey and joined me back at Delhi.

Had an awesome lunch at the Imperial – The best and the oldest hotels in Delhi with pictures all over the walls depicting the history of Delhi.

After I got free from my work schedule,we took a Delhi Metro and reached Qutub Minar.

Qutb-ud-din Aibak, the first Afghan emperor of Delhi initiated the construction of Qutub Minar in the year 1193, after getting inspired by Afghanistan’s Minaret of Jam. The minar was built to celebrate Muhammad Ghori’s victory over the Rajputs.

Qutub Minar Complex lies in the ruins of Lal Kot, the first city of Delhi. At the centre of the complex stands the Qutub Minar . 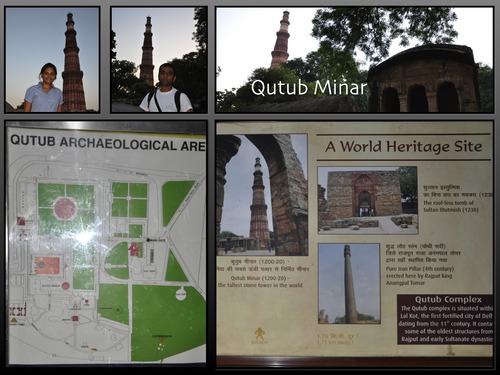 The 237.8 ft high fluted tower of red sandstone still reflects the then Indo-Islamic architectural style. The cylindrical shaped majestic tower is encircled by stone bracketed balconies. Each of those balconies is designed like honeycombs. The minaret is covered with intricate verses and carvings from the religious book of Quran. Numerous Nagari and Arabic inscriptions depicting the history of the tower is found in different parts of the tower.

The five-storied tower with a 14.4 metre base that tapers up to two and a half metres at the top is visible for a long distance around. Built mainly of red sandstone, the fifth storey of the Minar was restored by Firoz Shah Tughlaq in 1369 who used contrasting elements of marble.

The sides have inscriptions of Koranic verses and praises to its builders. Leading up to the top is a narrow winding staircase now closed to the public after several suicide attempts and incidents of stampede. 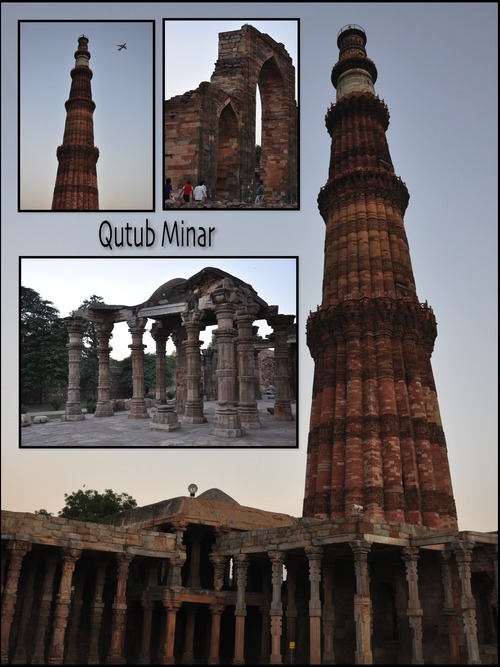 The Quwwat-ul-Islam (Might of Islam) mosque, completed in 1198, was the first mosque to be built in India. Using remains of 27 Hindu and Jain temples that had been destroyed by Qutb-ud-din’s army, the mosque also reflects technique used by traditional Indian artisans, especially in the detailed masonry and corbelled arches.

In the courtyard of the Quwwat-ul-Islam mosque stands a 7-metre high iron pillar, from the 4th century Gupta period. Almost completely rust-free, this 98% pure iron pillar continues to be a puzzle for metallurgists. A popular tradition says that a person standing with back to the pillar and encircling it with his hands has any wish granted. 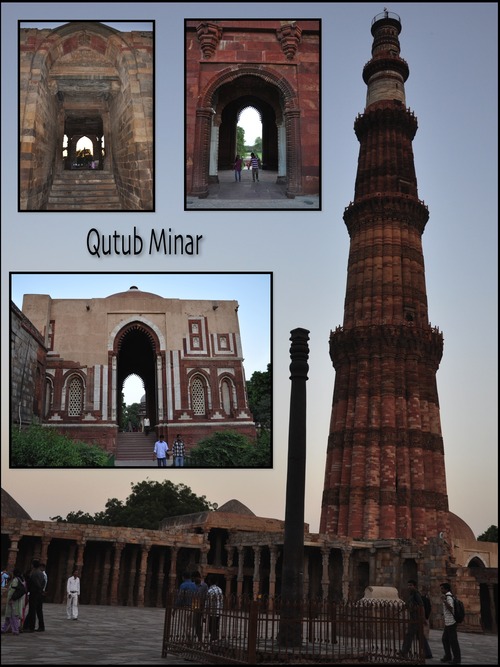 The Alai Darwaza , built in 1311 by the ambitious Ala-ud-din Khilji, is an 18-metre high sandstone gateway with lattice screens. It is ornamented with geometric and floral designs, with marble inlay work that reflects the craftsmanship of artisans from Turkey.

Open on all days