Let’s rewind about 200,000 years ago, to the very beginning of mankind. In Africa, there emerged a group of apes with a large brain capable of better reasoning and problem-solving than the other apes. These apes were curious beings, interested in exploring their world and developed higher level thought processes like self-awareness and rationality. Between 75,000 and 50,000 years ago, as the world was entering its last ice age, the Neanderthals were on their way out and settings were ideal for the Homo sapiens or the modern humans to take over the planet. A long time after the last Tyrannosaurus roared and crushed its opponents to pulp, earth had a dominant species once again.

Nestled in the hinterlands of India in the midst of a rocky terrain of dense forest on the northern fringe of the Vindhyan ranges, is a uniquely preserved prehistoric site at Bhimbetka, around 45 kms from Bhopal. These rock shelters tell us the story of homo sapien migration from Africa and exhibit the earliest traces of human life in India. These quartzite rock formations have 754 rock shelters with over 500 with rock paintings. The paintings are one of the few existing legacies of a lost time, stretching from the Palaeolithic (Old Stone Age) era to the Historical period. The quality and quantity of the rock art shows the long lasting interaction between hunter-gatherers and the landscape and also the gradual development of the socio-cultural life of mankind.

Ajay and I took an early morning bus from Bhopal and reached Bhimbetka at 8 a.m. The bus dropped us at a railway cross three kilometres from the rock shelters. We found a MP tourism hotel named Highway Retreat where the cook kindly prepared us sandwich and tea after the guard has turned us away saying we had come too early. After breakfast we walked to the rock shelters. A few months ago we would have run those 3 kms, but  niggles and injuries from the previous running season ensured that running was out of question. I would suggest hiring a taxi at Bhopal for travelers looking for comfort.

One of the oldest known prehistoric art in Asia is a series of Stone Age cupules or cup-marks-in-the-rock discovered in Bhimbetka. Geological investigations by renowned archaeologists Bednarik, Kumar and others have established that these cupules are more than 100,000 years old. In other words these were not the work of our ancestors (homo-sapiens) since they left Africa only 75,000 years ago, but of homo-erectus who roamed these plains long before the first Homo sapiens set foot in South Asia. 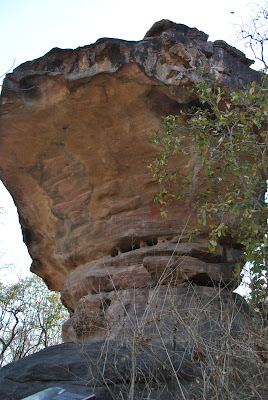 Colours used in the paintings were derived from locally available minerals – ochre from haematite and white from lime. The binding medium used was water and fixatives like animal fat and plant extract like gum. The solvent minerals get oxidised so as to leave their colour on the rock surface. Sometimes the paintings were used several times by artists of later periods without obliterating the older figures. The superimposition of paintings of different styles and periods can be seen in many of the rock shelters in Bhimbetka. Certain images have 15 layers of super imposition.

Here’s a snapshot of paintings at the Bhimbetka site in different periods:

Palaeolithic ( Old stone age Since our ancestors started using stone tools to around 10000 BC)
These are linear representations, in green and dark red, of huge figures of animals such as bison, tigers and rhinoceroses.
Mesolithic ( Middle stone age around 10000 BC)
Mainly images of the natural world and life of the hunter gatherers including scenes like hunting.
Neolithic ( New stone age around 8000/7000 BC)
Chalcolithic (around 3000 BC)
Quite a few of the images in the site are from this period.
Early historical (3300 BC to 1300 BC)
Most of the images are from this period. Red, white and yellow were the colours used. The paintings in this period are more defined and comprises of more elaborate scenes like royal processions, horse riding and battle scenes. This period represents the beginnings of known religion (image of Natya Shiva).

Major excavation work was carried out in this cave between 1973 and 1976 and has paintings from historical period. On the upper ceiling, there are silhouetted paintings of two elephants. The smaller elephant is driven by a man holding a goad in one hand, a spear in the other and sword in his waist. And both elephants are shown with long uplifted tusks. Drawings of a horseman and a soldier are seen below. 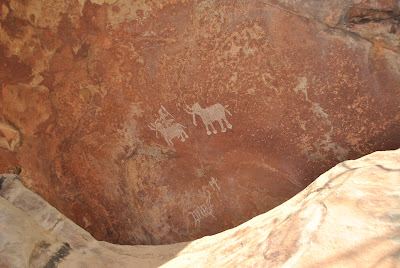 Bhimbetka Rock Shelter 1 – Notice the two elephants on top and below the horseman and a soldier.

This shelter is called the auditorium cave due to its shape. The paintings portray bulls, buffaloes, deer, a peacock, a tiger and the left hand of a child. Not sure how they classified the hand impression as that of a child as it seemed to be almost as large as my hand! 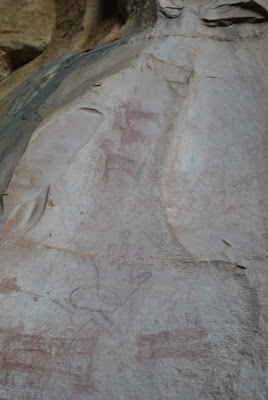 Bhimbetka shelter 3 – Auditorium Cave. Notice the image of hand of a prehistoric child in the bottom.

The cupules or cup shapes in the rocks that I mentioned above are found in this cave. These represent the art work of the now extinct Homo erectus who roamed these plains more than 100,000 years ago. 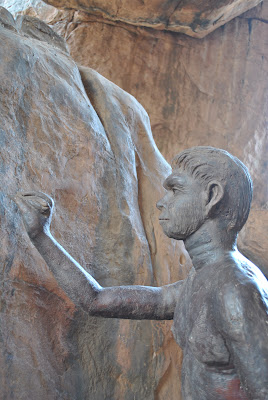 Bhimbetka Rock Shelter 3 – Auditorium Cave. The cup shape in front of the guys neck is called a cupule and is supposed to have been created by home erectus species more than 100,000 years ago.

This shelter is semi-circular in shape and popularly called “Zoo rock” because the paintings in this shelter comprise of more than 252 animals of 16 different species. Apart from the animal figures, there is also a depiction of a royal procession in dark ochre colour. The horsemen are shown with long hair and head dresses and armed with bows arrows and shields and are accompanied by drummers. Except a few that belong to Mesolithic age, most paintings belong to the Chalcolithic and Historical period. 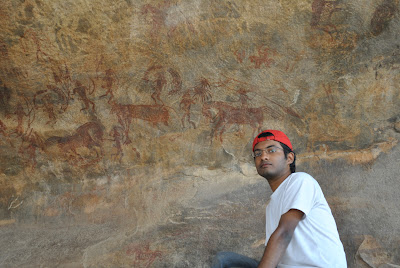 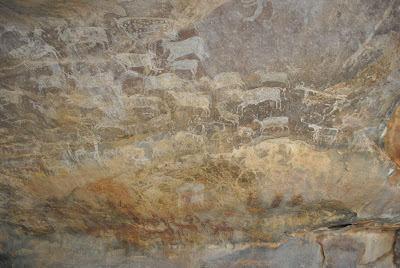 Contains figures of dancing men and woman along with drummers perhaps indicating that music and dance were integral to their lives. 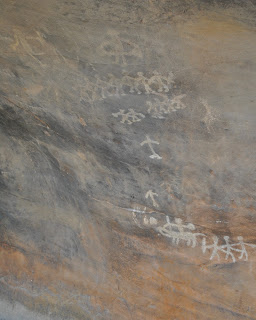 Most of the paintings in this rock-shelter are from the historical period and you can see figures of swordsmen carrying spears and riding horses. 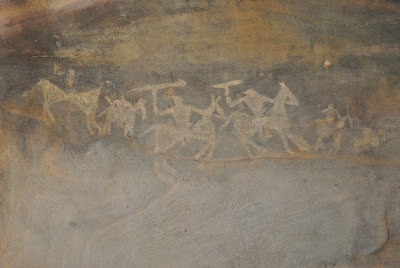 Various colours used in different periods are on display here. I initially thought that I had finally found evidence of aliens in the paintings but they turned out to be yellow paintings of flower pots and buds. Additionally there is an elegant figure of a horse and also an image of an elephant being stalked by a shrouded human figure. 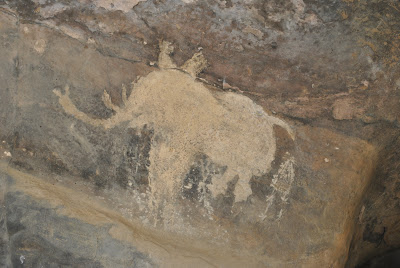 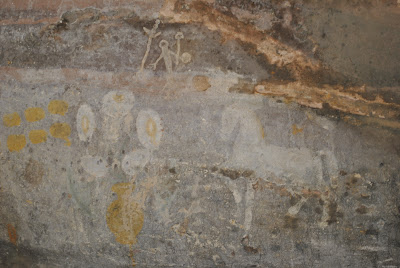 It is said that in the early historic eras, the first Gods appeared. Here in the desolate rock shelters, you will find the very beginnings of known religion. The painting of a man holding a trident-like staff and dancing has been christened as “Nataraj” by Dr. Wakankar. Most of the paintings in this shelter have eroded due to rain. 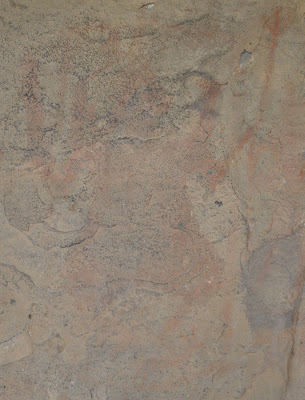 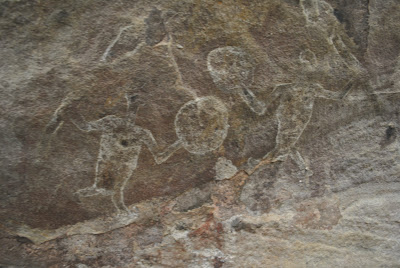 This shelter contains paintings of Carcasses and X-ray figures – mainly the bones of animals. Probably done by a witch doctor from those times! 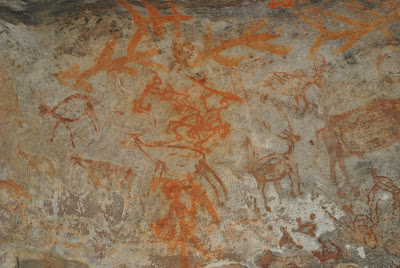 The boar rock is mushroom shaped and has the painting of a gigantic boar with two crescent shaped horns chasing scrawny human running for his life. Clearly humour and sarcasm was also part of their lives. 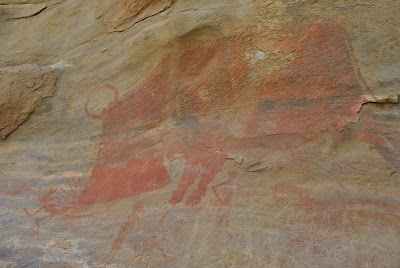 Over time, the hunter gatherers became farmers and the shelters lay forgotten until they were discovered by Dr. Vishnu Sridhar Wakankar in 1958. He was bestowed with the Padmashree by the Government of India for this discovery.

Ajay and I walked back to the highway from the caves. We learnt that buses do not stop at Bhimbetka and climbed up a sand lorry to travel to the nearest town of Obaidullagunj to catch a bus to Bhopal. On reaching Bhopal, we visited Bharat Bhavan, a multi art centre with verbal, visual and performing arts. It provides space for contemporary expression, thought, quest and innovation. We found thought provoking masks, creative photos and lasting works of art created in towns, villages and forests. A must visit for any traveler to Bhopal.

Later we had a quick lunch at Bharat Bhavan canteen and rushed back to the hotel room to freshen up and catch our train to Hyderabad. Our journey was at end and I realized that even though we had spent four days in Madhya Pradesh, it was really not enough. It might actually take months of traveling to really understand and appreciate the culture and history of India. The word “Bhimbetka” is said to have been derived from Bhimbaithika, or the seat of Bhima- one of the five Pandavas of the epic Mahabharata. Bhimbetka may no longer be the seat of Bhima, but it is definitely the seat of ancient South Asian history.

Reproduced from my personal blog.

https://www.gounesco.com/heritage/proof/37621952774-bhimbetka-the-very-beginning/https://s3-ap-southeast-1.amazonaws.com/gounesco.com/wp-content/uploads/2012/12/10060023/15.%2BBhimbetka%2BShelter%2B13%2BBoar%2Brock.jpghttps://s3-ap-southeast-1.amazonaws.com/gounesco.com/wp-content/uploads/2012/12/10060023/15.%2BBhimbetka%2BShelter%2B13%2BBoar%2Brock-150x150.jpg2012-12-10T06:00:23+05:30Bharath KumaranUncategorizedancient,bharath,Bhimbetka,caves,india,Madhya Pradesh,prehistoric
Let’s rewind about 200,000 years ago, to the very beginning of mankind. In Africa, there emerged a group of apes with a large brain capable of better reasoning and problem-solving than the other apes. These apes were curious beings, interested in exploring their world and developed higher level thought...
Bharath Kumaranbharath.kumaran@gmail.comProof_userGoUNESCO | Go UNESCO
Categories: Uncategorized. Tags: ancient, bharath, Bhimbetka, caves, india, Madhya Pradesh, and prehistoric.