Passing through The Temples of Odisha

Every last minute adventure trip in India begins with an online adventure, where one generally ends up in the losing side. Four people armed with two or more accounts each failed to book a tatkal ticket for two in IRCTC for the Diwali weekend. Ajay and I were nevertheless determined to travel to Odisha and visit Konark. Come Friday, we reached the railway station, bought unreserved tickets and paid a fine to upgrade to sleeper class. We slept on the floor, in the space between beds of a compartment in our carriage, blanketing ourselves from head to toe in our sleeping bags to avoid squeaky little rats. Surprisingly I slept well that night!

The next morning, we got down at Balugaon and caught sight of the first destination of our trip – the Chilika Lake. There were plenty of average looking to run-down restaurants on the main road and we chose the one that looked least decrepit for breakfast. Odisha is sandwiched between North and South India, the ideal melting pot for culinary delicacies. If you live in a major metro, chances are your favorite hotel has a cook from Odisha. Perhaps, all these good folks have migrated to other states for employment, leaving the kitchens of their native land in the hands of stable boys and fishermen. Breakfast was insipid and the idlies tasted like they were prepared a week ago. For the first time in my life, I wished that I had had breakfast in the train.

Chilika Lake is the second largest lagoon in the world and known for Irrawaddy dolphins. We missed the morning ferry and ended up hiring a boat to travel from Balugaon to Satpada across the Chilika Lake. For three excruciating hours, we listened to the constant whirr of the diesel motor and even managed to sleep for a while, just to shut out the deafening roar. Unsurprisingly, no dolphin ventured near our noisy tub, though we saw many storks and geese before we finally reached our destination. Lunch at Satpada was worse than breakfast, with most dishes filled to the brim with potatoes and a gooey gel that could only have come from a failed high school chemistry experiment. At that point in the trip, both of us were tired and a bit disappointed that the trip wasn’t half as exciting as we thought it would be.

After lunch, things started looking up. Satpada is surrounded by lagoons from the three sides. The three hour long 55 km journey from Satpada to Puri in a local bus goes through a very picturesque route filled with small lagoons and wetlands growing rice and paddy. The day ended early; it was around 5:30 p.m. when we reached Puri and dust had settled in. Puri initially seemed like an overgrown village until we had to face the traffic in the main road. I came across a few locals and foreigners smoking marijuana and in this temple town; it seemed like a way of life. These drugs have been in use in such places for generations and they were not going to let a small thing like a government ban get in their way. Though there is a pervasive poverty in the state that even a casual visitor will notice, the people here seem healthier and fitter than those in neighboring states down south where most villagers look like overweight cops.

Ajay and I prefer generally travel without a concrete plan on where to stay and what to visit. This gives us flexibility to visit and stay at places we want, but can get confusing at times as we end up travelling for days without seeing the back of a hotel! After a quick picture in front of the Puri Jagannath temple, we headed to the Ranger’s guest house; 20 kms ride from Puri that took about an hour. After travelling for more than 24 hours, we reached the “Rangers”, an adrenaline-pumping oasis that offers surfing lessons, forest treks and ATV training in the midst of a forest. The place is truly hippie and the main caretaker, Sachin, believes in mastering the power of the Kundalini through an indulgent lifestyle and spends his time playing a long winded bamboo shoot named Didgeridoo that produces a shrill bagpiper like music. 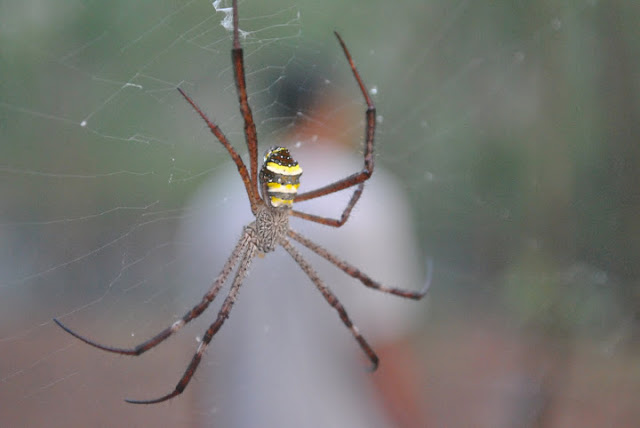 Trekking near the beaches of Puri

I didn’t know to swim, but there I was, ready to surf in the pristine blue beaches of Puri. We met our surfing instructor, Jessie, the next morning. An Aussie with dreadlocks and penetrating eyes, he travels around the world seeking the best waves to surf because he thinks that the Australian surfing scene was too crowded or localized. Jessie was hardly surprised when we informed him that we were not swimmers and strongly suggested that we try Stand-Up- Paddling (SUP) at the lagoon instead of venturing out the ocean. The suggestion was more of a directive and we had no option but to agree.

Jessie started our lessons with an easy looking exercise – standing on and balancing a plank of wood on circular tube with a diameter of around 20 cm. Jessie has this amazing Zen-like knack for teaching and explained that balance and breathing are at the core of any sport when he found us struggling to balance the plank. When I tensed up at times, he came over and asked me to loosen up the muscle in question. After half an hour of balancing on the plank, we moved onto a mechanical surfboard simulator that was closer to an actual surfboard and easier to balance than the plank. Once the training lessons were over, we went to a lagoon nearby for the real deal. Paddling in the surfboard was the best fun I had had in a while. I think I need to learn swimming just to surf in the ocean someday.

Though the Rangers is an amazing place, it might not be a place for the standard Indian temple tourist or people who are not used to the local E. coli bacterium. The place does not have bottled water. Sachin explained that the groundwater there was very pure and provided a simplistic reason like ‘I drink it and am fine’. Of course human physiology is never really that simple – don’t play Rambo; just take bottled water if you plan to head over to the Rangers.

That evening, we left for Konark after our surfing lessons. Konark is a hustling village that houses one of the greatest architectural masterpieces of ancient India – the 13th century Sun Temple. A detailed blog on this monument is coming soon, so I will not write more about the temple here. We settled into a good hotel that was way cheaper than what we would have paid for in other states. There is tremendous potential for tourism in Odisha with its pristine beaches and numerous historical temples. But somehow in Konark, the tourist crowd was missing in spite of Nov-Dec being peak tourist season. 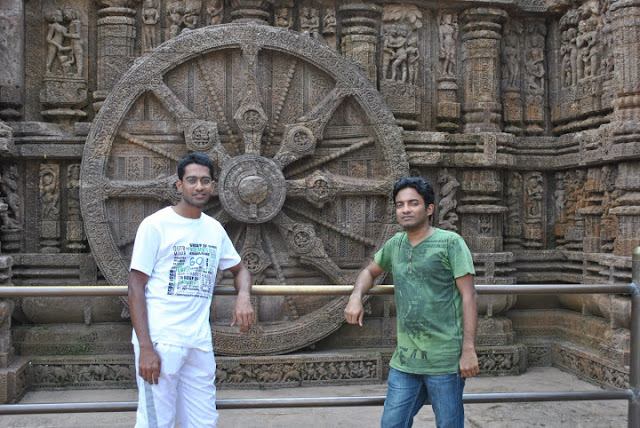 Ajay and me at Konark Temple

Before leaving Konark for Bhubaneswar, Ajay and I took stock of how much we had spent for the trip. On most of our previous trips, we never had time for lodging as we spent our nights travelling by train. This time though, we had stayed in a hotel every night. This coupled with the boat ride and surfing lessons proved to be quite the recipe for an expensive trip. We decided to couchsurf, a trend that’s catching up in India and involves requesting folks to provide lodging for free in their home for a short duration. Sanjay, the founder of Rangers, was kind enough to host us for the night in spite of the next day being Diwali. Couch-surfing gives you a chance to meet interesting people. Sanjay was a great conversationalist and we spent hours talking with him on a wide range of interesting topics like “Why surfing is such a great sport and what it can do for tourism in Odisha” and “Was the Konark temple the last nail on the coffin for Buddhism in India”. He also seemed excited about the surfing festival that the Rangers were planning in January and helped draw up our itinerary for the next day in Bhubaneswar. 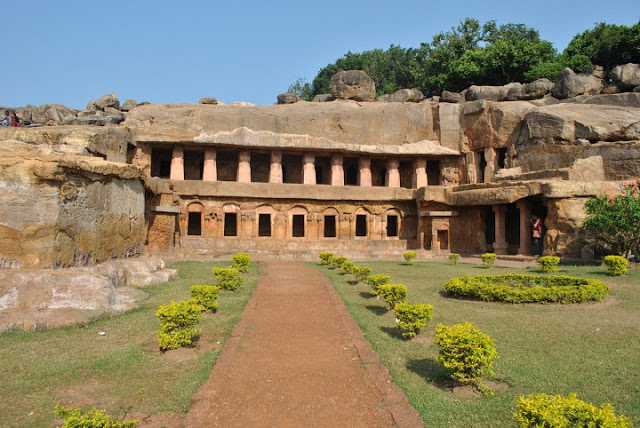 The next morning we headed to the Udayagiri and Khandagiri caves which are partly natural and partly hewn from rock in early 2nd century BC. These 33 caves were once the abode of Jain monks. The caves are famous for the Hathigumpha inscriptions in Devanagiri script, written by Raja Karavel, the king of Kalinga (modern Odisha) in India during the 2nd century BC. The inscriptions record the royal edicts during the rule of Raja Karavel. There is even a double storied monastery similar built in the style of the one in Ellora. Though the place has a historical importance and was excavated at around the same time as the Ajanta caves, the lack of paintings in these caves doomed these caves to remain a lovers’ hangout while the Ajanta caves are known world over for its murals and beautiful paintings!

We later visited the splendid Lingaraj temple that was crowded on account of being a temple where prayers are still offered. There are quite a few deserted temples around the Lingaraj temple that are built like miniature Konark temples and giving Bhubaneswar the title of ‘city of temples’. Certainly quite an achievement in India where there is a temple in every other street in most cities. The temples unfortunately are very poorly maintained. Due to lack of space, kids play cricket in these temples. I am sure priceless monuments fall prey to bad batting in these temples on a daily basis. At certain locations, temples are less than a meter away from houses and some of these temple complexes also double up as parking lots. Though one would tend to blame the ASI (Archaeological Survey of India) for this mess, I know that they simply are not equipped to fight such battles. The apathy towards these age old temples is the shame of a nation that doesn’t bother preserving its archaeological treasures. 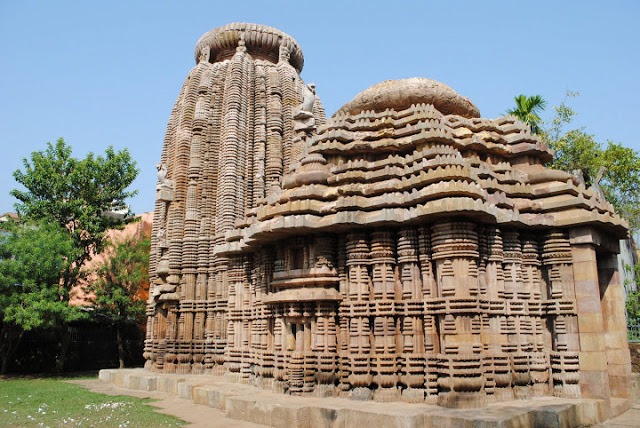 After spending the morning visiting temples, we left for the state museum and found it closed due to Diwali. Settled for lunch in Pizza Hut in a mall nearby as both of us had had enough of the local fare by then.

We thankfully had a ticket for the journey back home. I loved every moment of the four days spent traveling and meeting amazing people in Odisha. Well, perhaps not every moment; there was suffering, especially with regard to food and travel. After all, no journey is without pain but at the end of it, as we were boarding the train back home, I was glad I came.

Reproduced from my personal blog.

https://www.gounesco.com/heritage/proof/37698944072-passing-through-temples-odisha/https://s3-ap-southeast-1.amazonaws.com/gounesco.com/wp-content/uploads/2012/12/11060031/4.%2BUdayagiri%2BTemple%2B-%2BBhubaneswar.jpehttps://s3-ap-southeast-1.amazonaws.com/gounesco.com/wp-content/uploads/2012/12/11060031/4.%2BUdayagiri%2BTemple%2B-%2BBhubaneswar-150x150.jpe2012-12-11T06:00:31+05:30Bharath KumaranUncategorizedbharath,gounesco,heritage,india,konark,orissa,travel,world heritage travel
Every last minute adventure trip in India begins with an online adventure, where one generally ends up in the losing side. Four people armed with two or more accounts each failed to book a tatkal ticket for two in IRCTC for the Diwali weekend. Ajay and I were nevertheless...
Bharath Kumaranbharath.kumaran@gmail.comProof_userGoUNESCO | Go UNESCO
Categories: Uncategorized. Tags: bharath, gounesco, heritage, india, konark, orissa, travel, and world heritage travel.