After visiting the Taj Mahal,took a rickshaw and headed towards Agra Fort.

The original `Red Fort’ (although that title has since been usurped by the more well-known fort in Delhi), the fort at Agra stands next to India’s best known monument, the Taj Mahal. More often than not, the Agra Fort is overshadowed by the pristine beauty of the Taj.

Akbar, the greatest empire-builder of the Mughals, commissioned the Agra Fort in 1565, and his grandson Shah Jahan, pulled down many of the original buildings and replaced them with marble ones, while Aurangzeb added the ramparts. 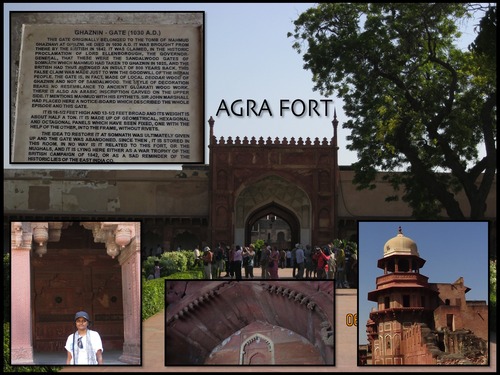 The main point of entry for tourists to the Agra Fort is the Amar Singh Gate; the main entrance, the Delhi Gate, is now closed. Once past the gate, some of the fort’s most splendid architectural structures are on view: keep your camera ready.

The first of these is the Diwan-e-Aam (the Hall of Public Audience), a pillared hall centred round a throne alcove of marble with a delicate pietra dura inlay of floral motifs. The throne alcove was initially made to house the Peacock Throne (which was later taken to Delhi by Shah Jahan, looted by Nadir Shah and then carried away to Persia). 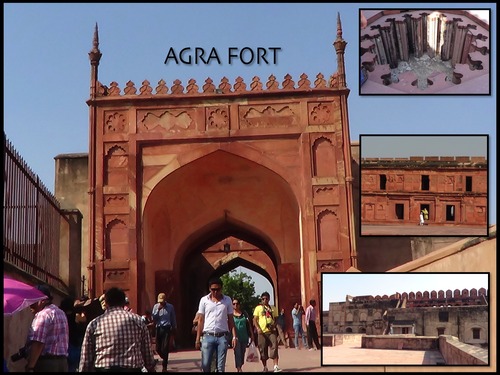 Like the Diwan-e-Aam, the Diwan-e-Khas, where the emperor held audience with visiting dignitaries, is also splendid. Built in 1635, it had two thrones on the terrace, one in white marble and one in black slate. Emperor Shah Jahan is believed to have used the marble throne for repose, and the slate throne to watch elephant fights in the courtyard. 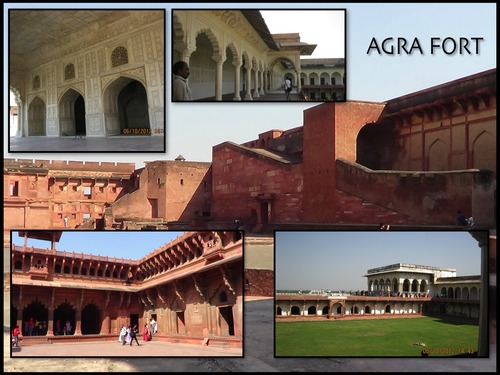 Other than these, the fort’s main structures include the Khas Mahal, where the emperor slept (the Khas Mahal has cavities in its flat roof to insulate it from the hot winds of summer) and the Macchi Bhawan, or fish chamber, with its fountains, tanks and water channels stocked with fish. The emperor and his courtiers amused themselves by angling here.   Also within the fort is the marble Nagina Masjid, built by Shah Jahan to house the women of the zenana or harem. Below it is the Zenana Meena Bazaar, where the ladies could examine and buy trinkets, finery and the like- all without actually emerging from their purdah (veil). The Sheesh Mahal (the Palace of Mirrors) has mirrored walls, which reflected and enhanced the lamplight, and was used by the women for bathing. 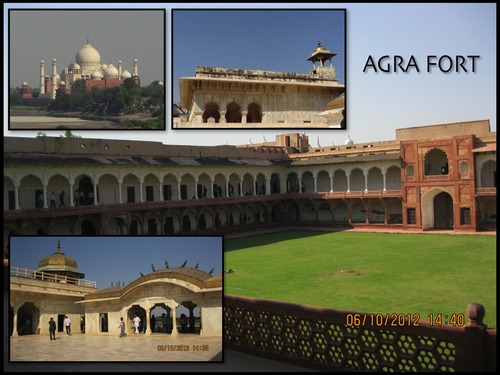 Last but not least is the two-storied octagonal tower known as the Musamman Burj, legend has it Shah Jahan who was imprisoned by his son Aurangazeb was locked up here in a tower that had a view of the Taj Mahal, where his beloved Noor Jahan was buried. 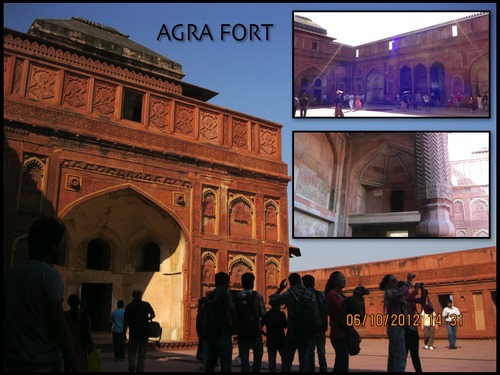 Timings: Sunrise to Sunset on all days.

Takes 3-4 hours to explore the Fort.(If in hurry you can finish in 2 Hrs as well).

« Passing through The Temples of Odisha
Fatehpur Sikri – City of Victory »