After visiting Agra Fort,I started my first ever Solo Travel.

Took a shared Jeep ride from Agra to reach Fatehpur Sikri. (Usually takes 45 mins).They will drop you right in front of the Main Gate.

I checked into Govardhan Hotel which is right next to the Main Gate of Fatehpur Sikri.Very nice hotel and the guy who manages this place worked with Lonely Planet earlier,came back to his Home Town and started promoting the History of this place.This place is very economical and safe for Single Female travellers.Above all good food.

The hotel people have arranged for a local guide who again turned out to be very good.Initially I thought of completing my visit to the Monument in the evening,stay back at the hotel for the night and start to Bharatpur early morning.But the guide suggested me to visit the Monument by Sunset & Sunrise.This was very helpful tip.

The Guide decided to show me the Royal Palaces by Sunset and left the Tomb of Salim Chisti for the next day.

The deserted fort city of Fatehpur Sikri is 37 kms from Agra. Akbar, the greatest of the Mughal Kings commissioned The Fatehpur Sikri in 1569. The Fatehpur Sikri was declared as a World Heritage Site in the year 1986. The city sits on a rocky ridge, with the village Sikri at its foot. The location of Fatehpur Sikri was also appropriate for discussions and deliberations that the Emperor had with religious leaders, statesmen, writers and philosophers. However, 15 years after it was established, the court had to be moved out of Fatehpur Sikri because of acute shortage of water.  Built in Akbar’s favourite style in red sandstone, this 8 square kilometre complex houses several buildings, which are an amalgamation of Hindu and Islamic architecture. Akbar was an astute ruler, who encouraged interaction with his Hindu subjects and neighbouring chieftains. The historical monuments add on to the charm of this amazing city. 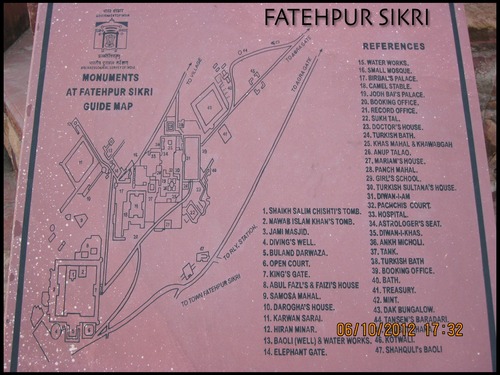 The Diwan-e-Aam is where the public could have an audience with the emperor, thereby listening to their complaints.Court proceedings were also held here in the Diwan-e-Aaam. 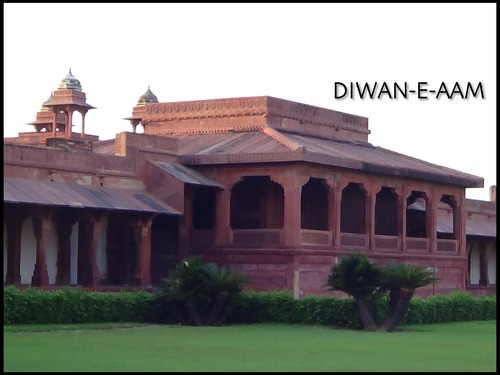 The Diwan-e-Khas was the hall of private audience, where Akbar conferred with religious leaders and the nine gems of his court. The centerpiece of this hall is the carved Throne Pillar, which supports a circular platform connected to the edges by four bridges. The emperor sat in the centre and discussions and debate were held here. In front of this hall is a courtyard with a Pachisi court (a game like Ludo played with dice) where the emperor played using slave girls as live pieces. 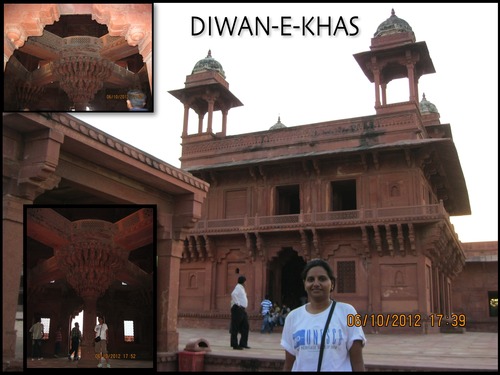 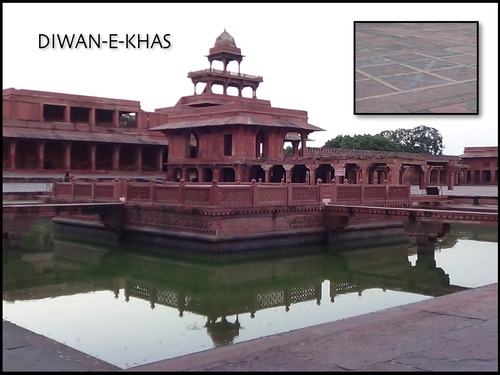 House of the Turkish Sultana:

The house of the Turkish Sultana was the palace of Akbar’s favourite wife, the Sultana Ruqayya Begum. The building is influenced by Turkish and Persian style, and could have been a pleasure pavilion with mirror tiles on its walls. It is said that the great Hindustani classical musician Mian Tansen once sang Raag Deepak (song of fire) here and with the intensity of his music set the place alight. He then sang the monsoon raga, Megh Malhar invoking the rains and so doused the flames. 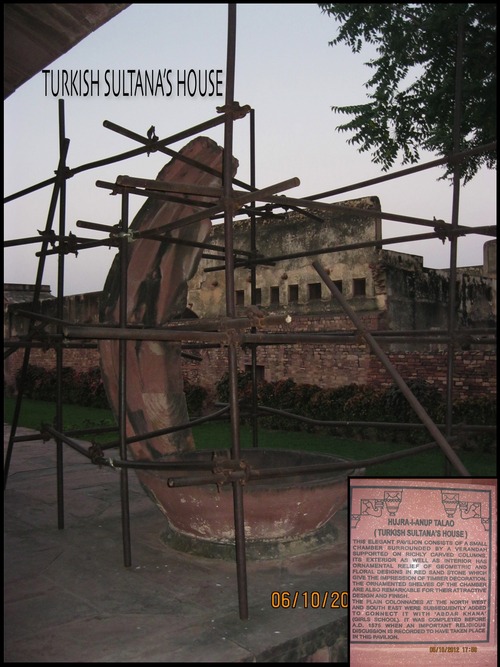 Akbar’s private quarters housed the Daulat Khana , or library. He was reputed to have a collection of some 50,000 manuscripts, which he would be read out from. Akbar was himself illiterate, but the manuscripts were very precious for him and he carried them around wherever he went. Akbar’s sleeping chambers, the Khwabgah (house of dreams) had water channels to cool the air. 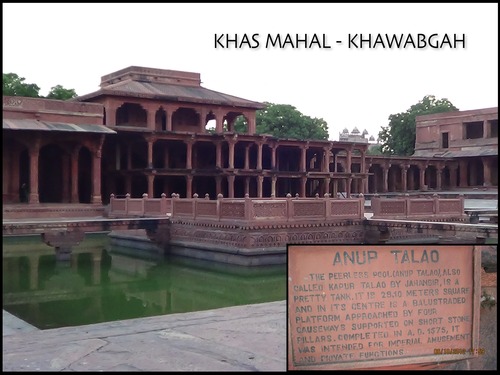 Jodha Bai’s Palace has a distinctly Hindu characteristic with influences from Gwalior, Gujarat and Mandu.

Before I could realise the guide became the photographer and clicked some amazing shots.

After 2 hours of going around the Royal Palaces I had nice tea and got back to the hotel and rested for the day.

Got up early and the guide was ready to take me around the outer periphery of the Fort which I otherwise I couldn’t have seen.

Then we came to the Tombs part of Fatehpur Sikri.

The Jami Masjid was the first building to be constructed within the fort. The entire fort grew around it. The main entrance to the mosque is through the Buland Darwaza. 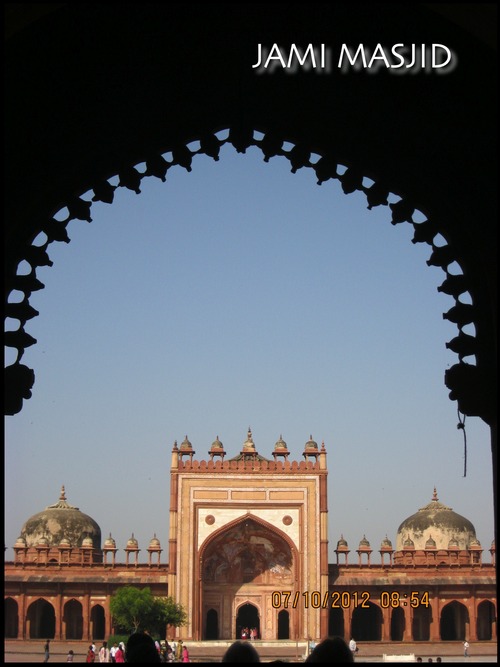 The Buland Darwaaza, also known as the Gate of Magnificence, is the first step to the famous Fatehpur Sikri and the doorway was built by Akbar at the time he had defeated the Khandesh Kingdom of Gujarat to celebrate his success. The Darwaza is 54 meters high and 35 meters wide. The monument depicts great architectural themes and rich culture belonging to the Mughal era and red stonework and white marble tiles were used for its construction. The pillars and the chhattris of the Buland Darwaza have intricately carved inscriptions from Quran, the holy book of the Mausoleums. 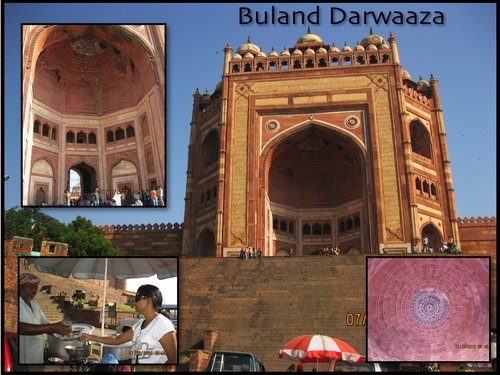 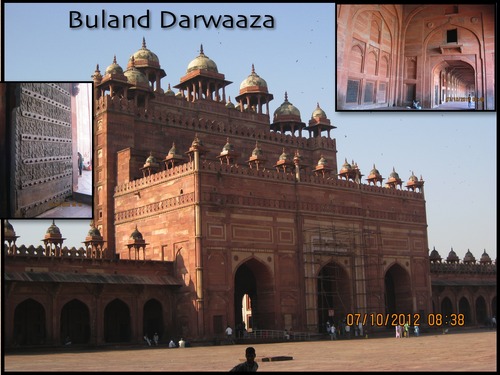 The Dargah of Sheikh Salim Chishti, the Sufi saint who is believed to have blessed Akbar with a son, is also within the fort. The tomb is made up of a white marble building with intricately carved lattice screens and engravings in mother-of-pearl, lapis lazuli and topaz. Even today, childless women come to the Dargah or tomb to tie strings on the jalis (screens) as prayer to the saint. In the month of ramzan the tomb celebrates urs, when groups of kawwali singers perform devotional Sufi songs at the tomb. 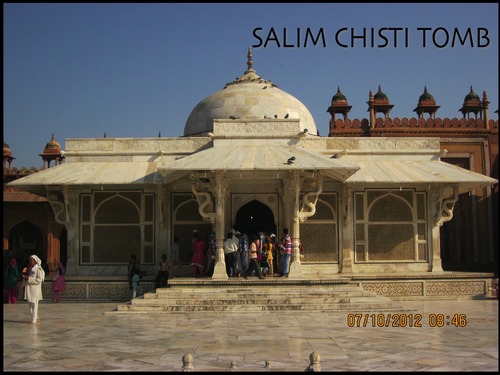 It is said that Akbar, who had no son of his own, set to seek the blessings of a Sufi saint, Sheikh Salim Chishti. The blessings of the saint proved fruitful for the king and he was blessed with an heir to his empire. The king named his son, Salim (to honour the saint) who later become famous as Jehangir. Akbar built the city of Fatehpur Sikri to pay tribute to the holy saint. 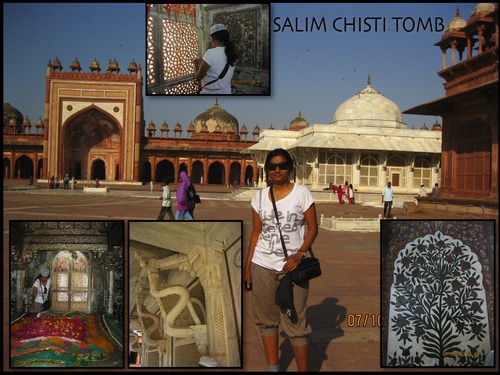 Take a Auto Rickshaw and go around the place to see many more smaller structures like Tansen Baradari,Elephant Gate,Hiran Minar,Fort Outer wall,etc.

There is a well maintained ASI Guest House which was built originally by the Britishers. 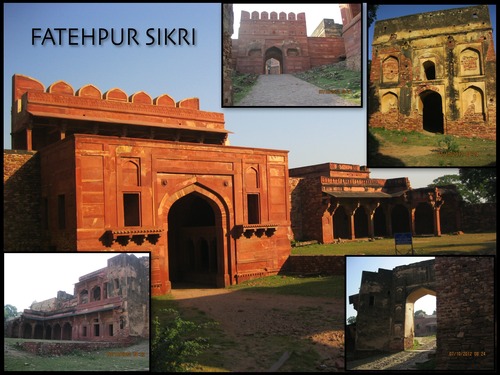 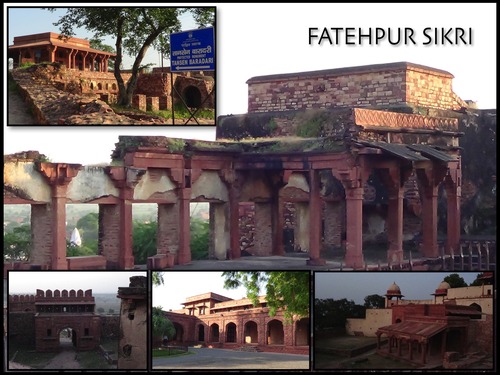 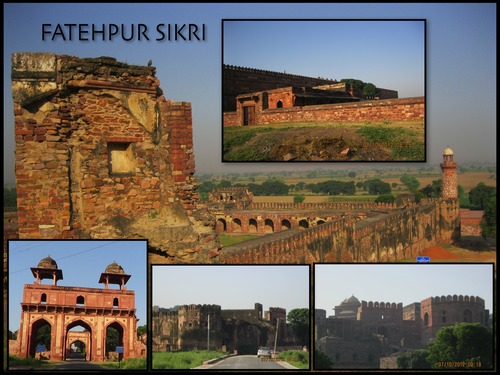 Time was well spent at Fatehpur Sikri.Later took a bus from nearby Highway and headed towards Bharatpur – Keoladeo National Park.

1.If interested in Sufi Songs & Khawali – do visit this place during Ramzan.

4.Take a auto rickshaw and go around the Outer periphery of the Fort Walls.