After spending a year in the pink city, I was speechless after being asked how much I explored the heritage city. After a rigorous attempt of making a plan of exploring Jaipur with friends, we decided to visit the fort of Amber.

Located strategically on a hilltop, Amber Fort, also known as Amer ka Qila , was built by Raja Man Singh in 1592. It is known for its artistic fusion of Islamic and Rajput architecture. The road leading to the hilltop overlooks the beautiful Maota Lake, and the cool breeze welcomes for an unforgettable experience.

The inclined  road that leads to fort can be traversed by elephants or private vehicles. We preferred our scooties for the same!

Hungry since morning, we filled ourselves with the light snacks near the parking area of the fort. This place is famous for its exquisite Rajasthani snacks like Chana jor garam, bhel etc.

Gazing through the fort map on one of the walls while my friend was buying tickets, I came to know that the fort is divided into four courtyards in a well turned out palace complex. After a fifteen minute long photo session , we started exploring history !

The first courtyard is a huge one. It comprises of a three level structure and 2 gates.It also houses a Sila Devi temple where the Rajput maharajas offered prayers. We entered through the Chaandpole or the moon gate whereas the maharajas used the Soorajpole or the Sun gate. Above the Moon gate is the Suhag Mandir where ladies of the royal family used to watch through the latticed windows, the functions held in the yard. This courtyard also had a stable complex for the horses and quarters for the horseriders (which is now converted into offices).

The second courtyard consists of the Diwan-e-Aam. 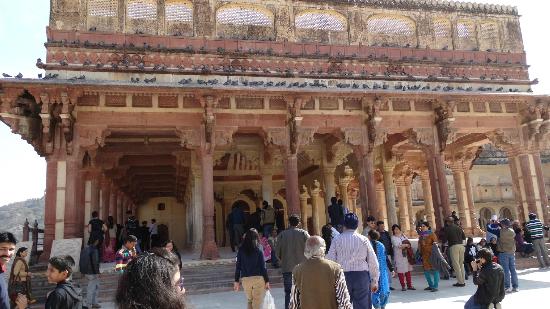 Unsuccessful in finding an audio guide for us (in the places they’re supposed to be), we started overhearing the guides speaking to foreign tourists. The Diwan-e Aam , as the name suggests, was made to address public petetions.It is made mostly of red sandstone with 27 collonnades with galleries above it. The second courtyard also has a gate known as the Ganesh Pole, because in Hindu mythology, Lord Ganesha is considered to be remover of obstacles.

The third courtyard has two buildings, one opposite to the other, separated by a garden laid in Mughal fashion. 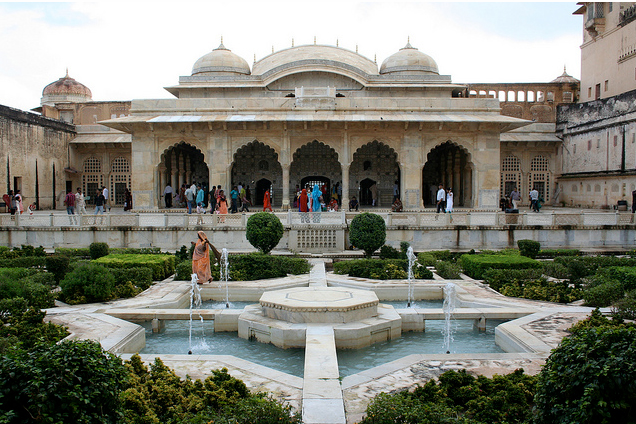 The first building is the  Sheesh Mahal (Hall of Mirrors).

It is a said that under a flickering candle light, the hall looks like a glitering jewel box. It has toilet complexes and baths attached. The architecture was so marvellous that  a persian water wheel was used for water lifting and the toilets and the baths had separate supplies for cold an hot water. 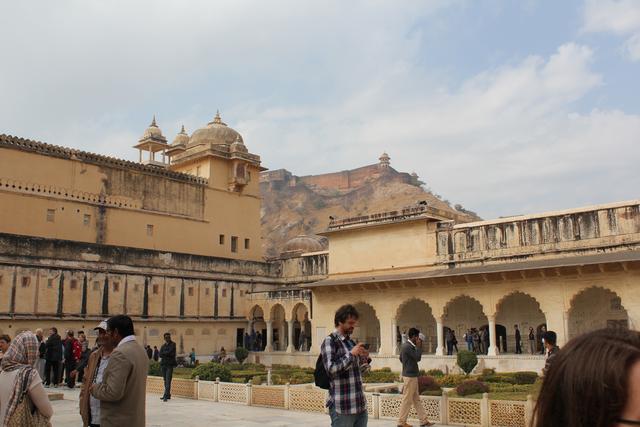 The second building is the Sukh Niwas or the Hall of pleasure. It was made such that a piped water supply flows through an open channel that runs through this edifice keeping the environs cool, as in an air conditioned environment.

Another attraction here is the “Magic Flower” fresco, carved in marble. It depicts seven different designs by hiding specific parts of the fresco with hands. The palace of MaanSingh, considered to be the oldest structure, houses a pavilion whose sides are connected to small rooms with balconies. Also, the LionGate was a guarded gate that led to private quarters in the premises.

The fourth courtyard houses the Zanana Deorhi or the ladies quarters.This courtyard has many living rooms where the queens resided and who were visited by the king at his choice without being found out as to which queen he was visiting.The Jas Mandir or the hall of private audience is also located in this courtyard.

Exhausted and hailing towards the exit, there stood  the quench for our hunger, a Cafe coffee Day, right inside the fort complex.Yes that’s right, we ran towards it like a cat towards a ball. Having lunch after a tiresome trip is a relief of a lifetime. On the way to the exit, we saw the secret tunnel that connects the Amber fort with the Jaigarh fort (used during escape times).

The Amber fort is said to be the strongest and most strategically important fort of Rajasthan. Legends say that the Afghan treasures of Maan Singh are hidden inside the fort (myths!).

The fact that the Amber Fort stands proudly and well preserved is a marvel in itself given the many wars that have taken place in this region’s history, which is why this place contributes a great deal to the cultural heritage of India. And this heritage needs to be preserved and well protected for generations to come !

https://www.gounesco.com/heritage/proof/amber-fort-myths-legends-royal-experience/https://s3-ap-southeast-1.amazonaws.com/gounesco.com/wp-content/uploads/2014/12/19111151/IMG201.jpghttps://s3-ap-southeast-1.amazonaws.com/gounesco.com/wp-content/uploads/2014/12/19111151/IMG201-150x150.jpg2014-12-19T16:41:51+05:30AnkitUncategorizedAnkit Kachroo,travel,world heritage travel
After spending a year in the pink city, I was speechless after being asked how much I explored the heritage city. After a rigorous attempt of making a plan of exploring Jaipur with friends, we decided to visit the fort of Amber. Located strategically on a hilltop, Amber Fort, also known as Amer...
Ankit Kankitkachru@gmail.comGcaGoUNESCO | Go UNESCO
Categories: Uncategorized. Tags: Ankit Kachroo, travel, and world heritage travel.
« Ellora caves
Janter Mantar , Jaipur »