Proof by
Stefano Rossi
Proof for
WHS - Mantua and Sabbioneta

Italian master, Julio Romano, who, had he himself

eternity and could put breath into his work, would

beguile Nature of her custom, so perfectly he is her 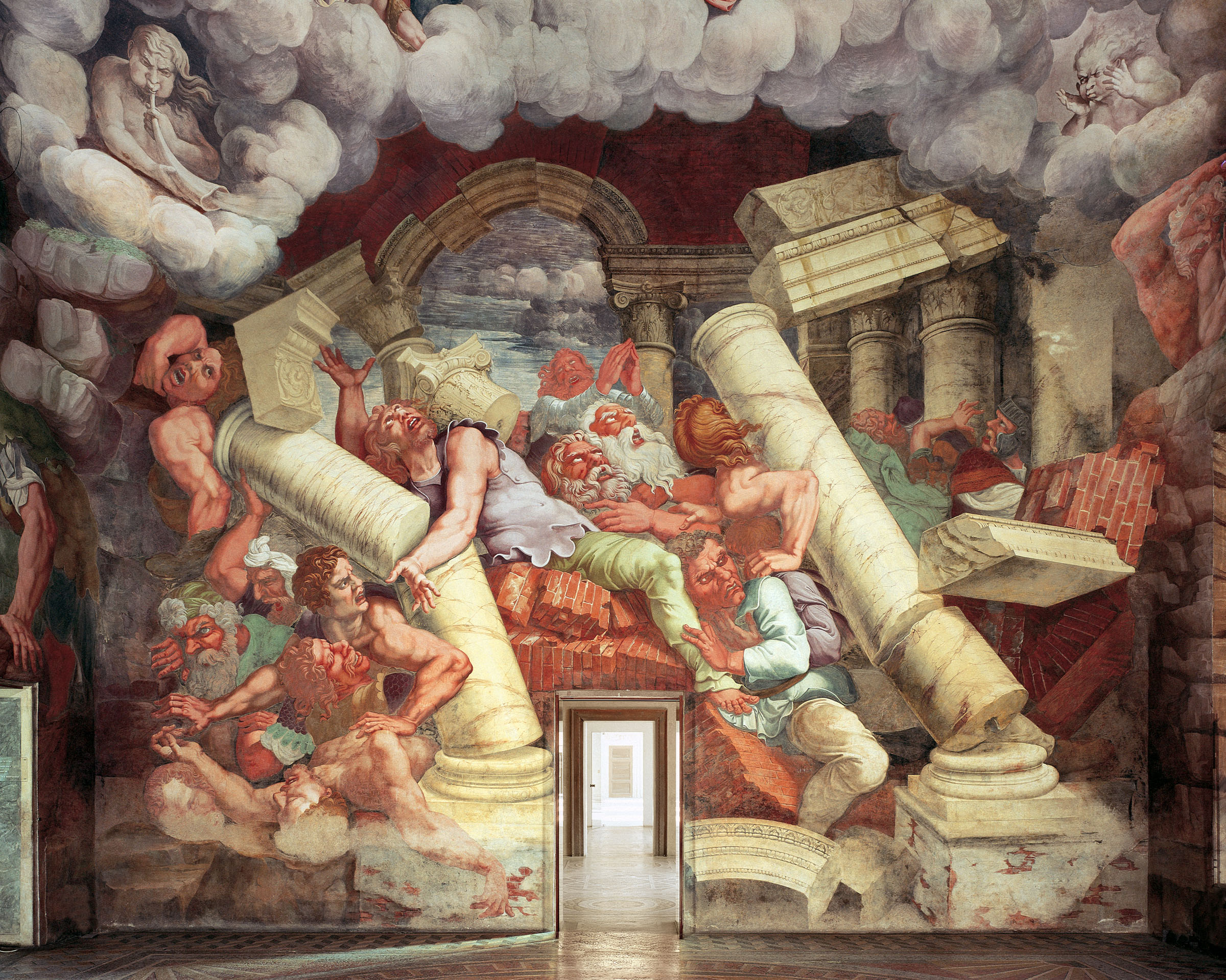 Arriving at Te Palace I’m welcomed by a breathtaking facade, which is admired by all the tourists visiting. They are marveled by the size of the residence, as their took their eyes off from the map. It’s position is located at the suburbs of Mantua, a city that blends perfectly with the architectural style of the Palace. It was designed by desire of Duke Federico II, son of the greatest Isabella d’Este, and constructed from 1524 to 1534. Built with the aim of giving a leisured and recreational residence for his family and guests. Federico’s designing ideas surely had some stylistic influences from his mother Isabella and from his memories in Rome with Pope Giulio II, where it was able to view the Renaissance masterworks realized by many famous painters as Raphael Sanzio and his pupil Giulio Romano. The innovative environment of the time was so majestic that it seemed impossible not to merge it with Te Palace. So in 1524 Giulio Romano was promptly called to Mantua.

From end to end the architecture’s tricks are tumbling on me and probably the palace is laughing silently. Everywhere there is a remarkable will power in evoking antiquity and its ascension, but I can’t find any religious allusion while I’m walking around the Palace. In the halls, I could spot Salamanders in the wood carving or inside a scroll ornament. The Salamander was the personal symbol chosen by Federico II because of its ability, to withstand fire, was interpreted as resistance to the Love’s Fire and it was just the quality that was missing to Federico II … He was passionately bounded to his favorite Isabella Boschetti. In the meanwhile the presence of satyr and grotesque figures are defining the real nature of the construction, that is also to have fun. Their physiognomy are rendered by pure mastery, inspiring at the same time courage and fear, like something is going to happen. Te Palace is definitively an amusement place. The garden reflects the Renaissance vision, dominated by rationalism, proven by the emicycle exedra which outlines the edge of it.

Going back to the core of the palace I find the Hall Chamber, dedicated to the Gonzaga’s powerful horses, their Pride. They are represented in a full-scale, each one with theirs name and they look so alive with their postures and looks. I’m very impressed by the horse Dario which with its look, betray its position within the fake architecture. Following the itinerary I get lost into the most cultured and sumptuous location of Te Palace, the Chamber of Psyche. The tale is taken from the Metamorphosis of Apuleio. Amor is hired by Venus to punish the beautiful Psyche but the tale takes another turn…. as you could see, from the roof top, there is a portrait of Jupiter and Psyche’s affair.This Chamber is rich of mythological figures but the most impressive one is Polyphemus, which is rendered with a manner that just the Master Giulio Romano could have done. Furthermore on the south and west walls there are Jupiter and Psyche with their daughter Voluptuousness surrounded by, what it looks like, a truly immersion into a Pagan’s Heaven, where Gods and mortals forever trespass as millenniums ago in the mind of Apuleio. 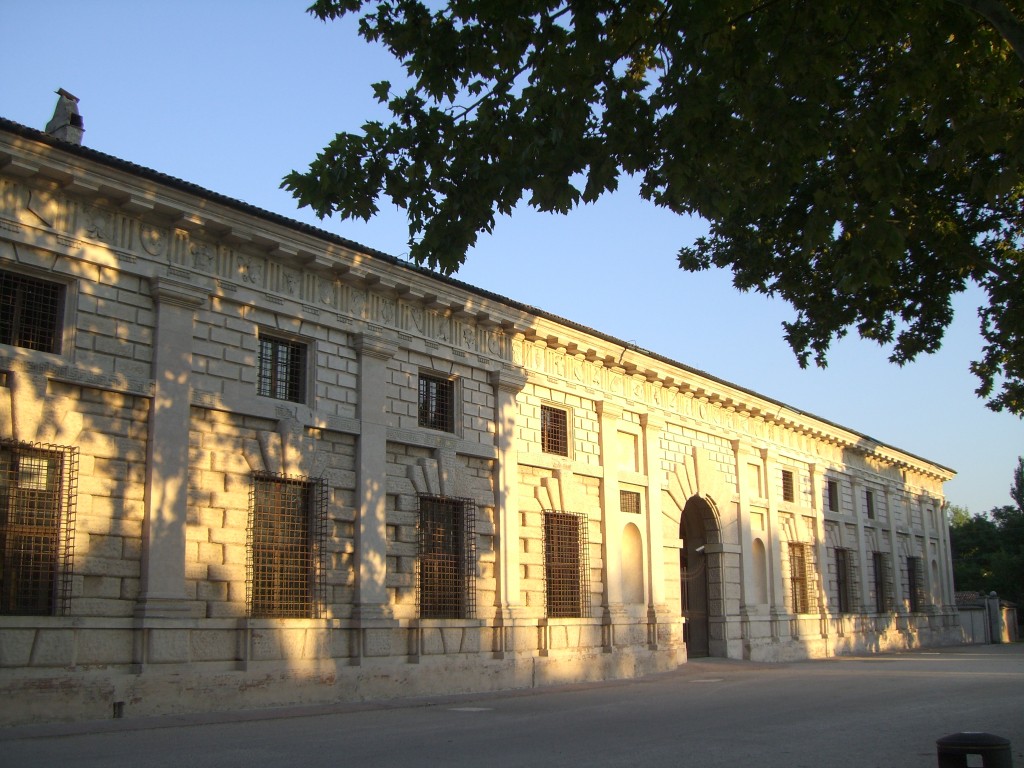 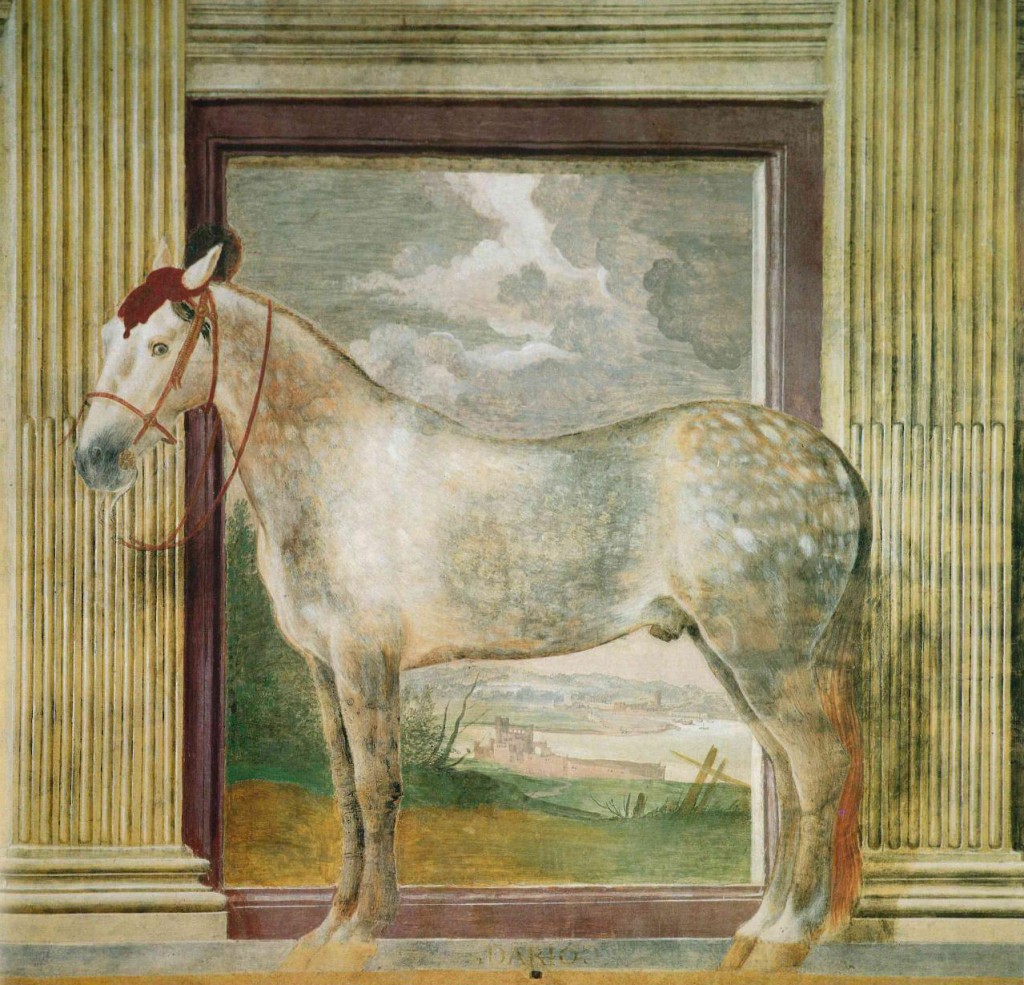 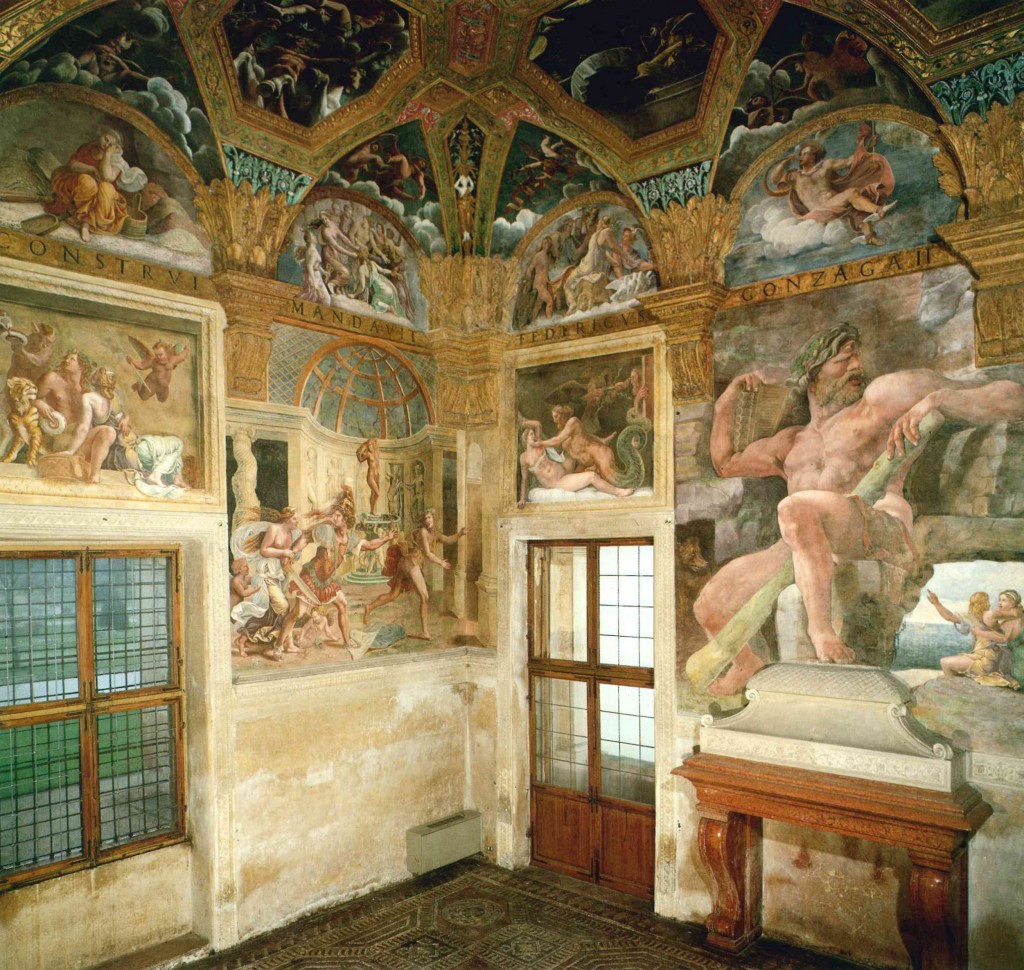 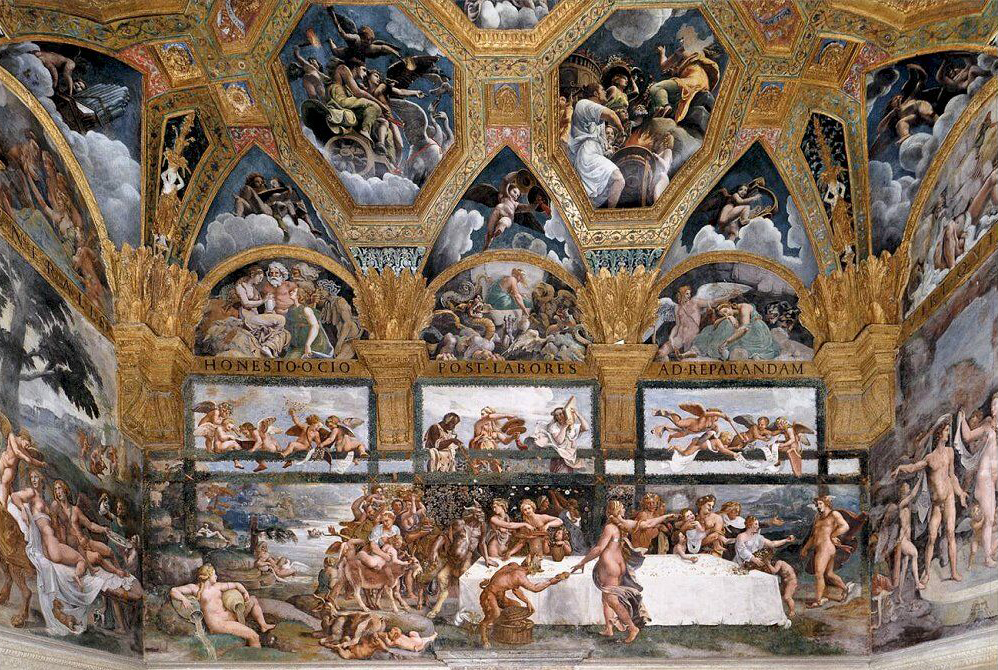 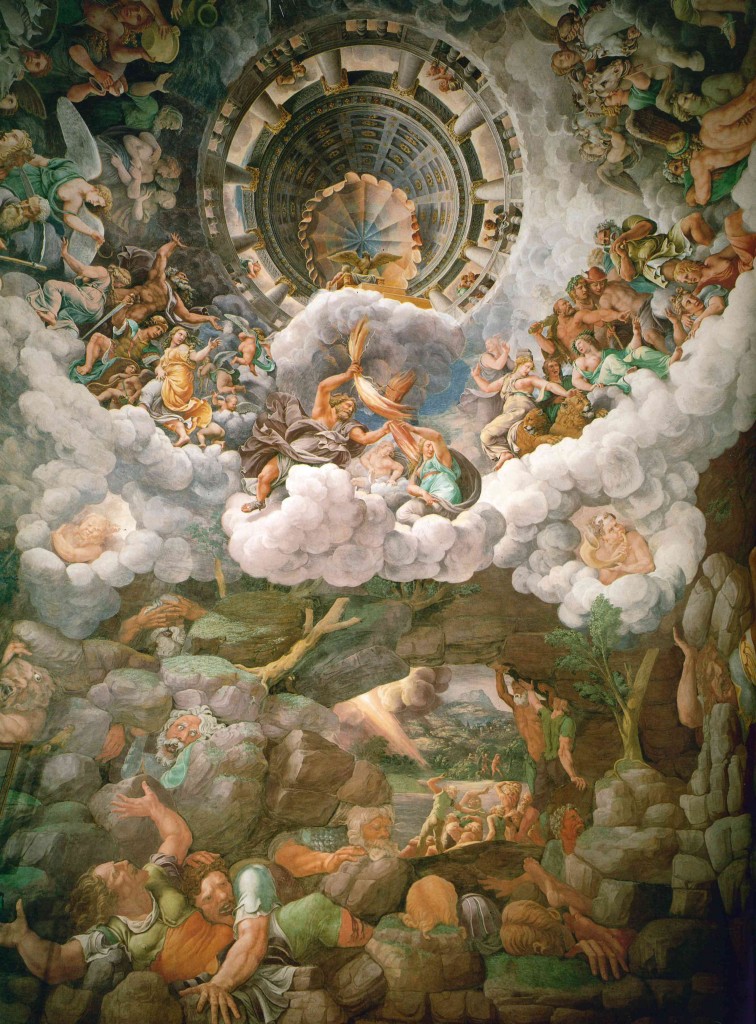 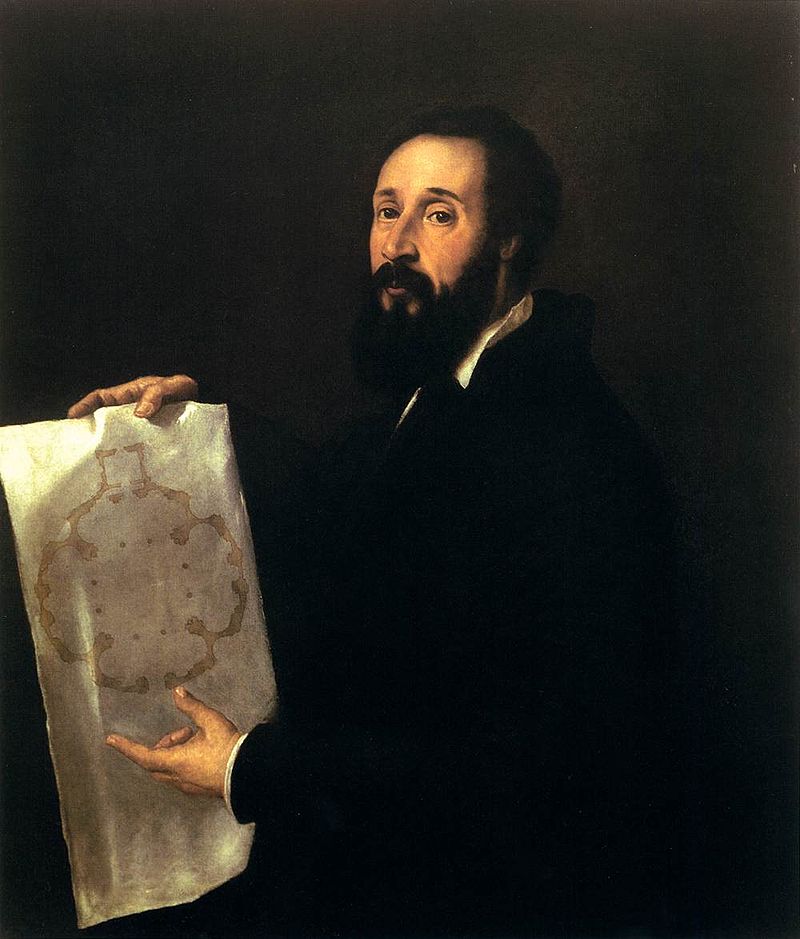 Leaving behind this space I walk in a solemn space rich of visual effects given by its Giants depictions , leaving me and the others visitors immersed by fears. The Chamber of the Giants is spectacular, its perspectives shroud the corners, giving the effects of being inside a vortex room where everything pictured is crumbling. There are punishments that can challenge even Jupiter. Even if there could be a comparison to Carl V and his vassals, it’s obvious that the composition is brand new. One Giant is exhausted by the river, another one is looking at me while is overwhelmed by rocks. I could fully perceive their agony yet to be fascinated by their ironic grimaces…another thing to enjoy more about this room.

When leaving I see a full moon shining through Te Palace, the Palace that just gave me an epical feeling that will not leave me alone for a while.

https://www.gounesco.com/heritage/proof/fall-giants-illusions-mythology-te-palace/https://s3-ap-southeast-1.amazonaws.com/gounesco.com/wp-content/uploads/2014/05/31180120/5.1.jpghttps://s3-ap-southeast-1.amazonaws.com/gounesco.com/wp-content/uploads/2014/05/31180120/5.1-150x150.jpg2015-12-31T18:48:38+05:30Stefano RossiUncategorizedGrublok,heritage,heritage site,italy,makeheritagefun,Mantua and Sabbioneta,travel,World Heritage Site,world heritage travel
“…that rare Italian master, Julio Romano, who, had he himself eternity and could put breath into his work, would beguile Nature of her custom, so perfectly he is her Ape”   William Shakespeare – A Winter’s Tale     Arriving at Te Palace I’m welcomed by a breathtaking facade, which is admired by all the tourists visiting....
Stefano Rossir.stefano1987@gmail.comGcaInterest in creating and discover past and present creations from different cultures.GoUNESCO | Go UNESCO
Categories: Uncategorized. Tags: Grublok, heritage, heritage site, italy, makeheritagefun, Mantua and Sabbioneta, travel, World Heritage Site, and world heritage travel.

Interest in creating and discover past and present creations from different cultures.
View all posts by Stefano Rossi →
« Valley of Temples (Agrigento)
The Tamberma village five centuries after »