Hampi of today is only a partial glimpse of its original splendid self. Hence the term ruins. But taking in the sights, one wonders, had it been left untouched by history, how fabulously spectacular, it would have been. Some claim ‘Hampi’ means ‘champion’. One can’t agree more. Hampi was a popular destination for travelers during its glory. Its palaces and artistry of Dravidian temples were much admired by travellers, be they Arab (Abdul Razaak), Portuguese (Domingo Paes) or Italian (Nicolò dei Conti). 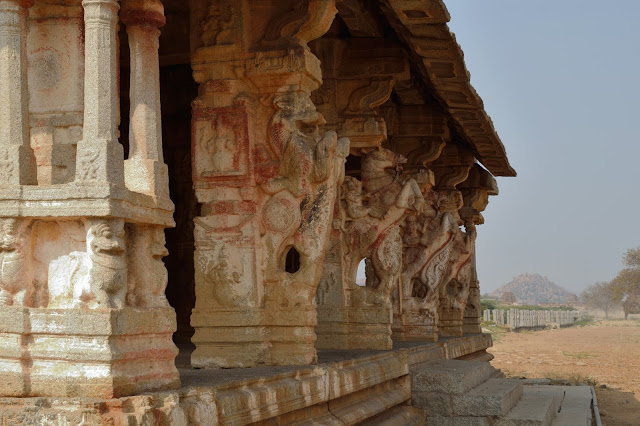 This enchanting city of ruins proved a memorable and magical experience. If you wish to be reborn in a different era, Hampi definitely is the right place. The temple town of Hampi, the former capital of the ‪#‎Vijayanagara Empire—also called Karnata Empire (used in some inscriptions) or the Kingdom of Bisnegar by the Portuguese—situated on the placid banks of river ‪#‎Tungabhadra, is a heaven for tourists who want to take it easy. A place where everything moves slowly, even the tourists and their tired limbs. 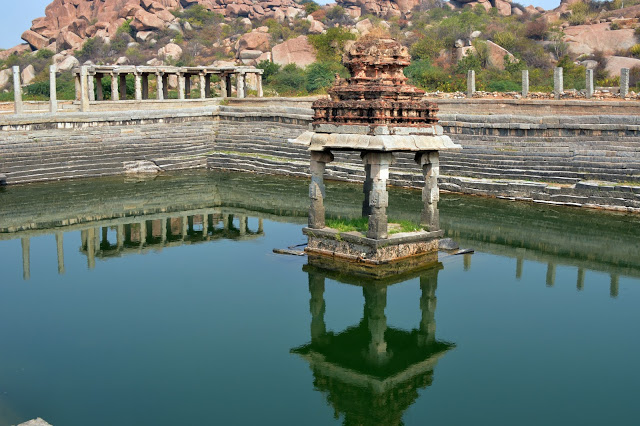 Skillfully sculpted temples and palaces, a meticulously planned market place, roads and sanitation, Hampi is a fabulous example of town planning of Vijayanagar era. The history of Hampi during the Vijayanagar Empire spans from 1335 upto 1646. The period of king Krishnadevaraya (1509-1529), was the golden era of #Vijayanagara Empire. Hampi was the capital city of this geographically vast kingdom which constituted most of the Southern Indian peninsula and stretched itself further north to central India. As per Wikipedia, ‘‘the Vijayanagara Empire created an epoch in South Indian history that transcended regionalism by promoting Hinduism as a unifying factor.’’

UNESCO declared Hampi as a World Heritage Site in 1986. It was declared an endangered monument in 1999. Excavions are still on and hopefully many secrets are yet to be discovered.

Hampi is mesmerizing even amidst its ruins. The once enchanting capital city is in ruins due to thoughtless carnage unleashed by the Sultans of Bijapur and their allies. Today, looking at the demolished and badly damaged buildings, one can’t stop to ponder over the love with which these monuments have been created. Ruins reveal a lot about the rulers of the time. Skills of the artisans were perfection personified. One also wonders about the looters and killers who systematically destroyed a thriving city and killed many.

History tells us that the city was conquered by the Deccan Muslim confederacy after the battle of Talikota in 1565 and it was plundered over a period of six months before being abandoned. The entire royal family was killed, temples vandalized and beautiful statues were broken.

Present day Hampi is a small town in ‪#‎Karnataka, around 350 km from Bangalore and 12 km from the nearest railhead, ‪#‎Hospet. Scattered over an area of around 26 square km, lay the numerous spectacular relics of a glorious bygone era. Hampi provides the visitors an experience which combines history, religion, architectural splendor and untouched natural surroundings. It’s truly like a huge open air museum, where every nook and corner holds some awe-inspiring secret.

The undisputed highlight of the Hampi ruins is the 16th-century Vittala Temple—with the ornate stone chariot that stands in the courtyard—stands amid the boulders 2km from Hampi Bazaar. The temple was never finished or consecrated, yet the it’s incredible sculptural work remains the pinnacle of Vijayanagara art. The outer ‘musical’ pillars of the main ‘mandapa’ reverberate when tapped. They were supposedly designed to replicate 81 different Indian instruments. 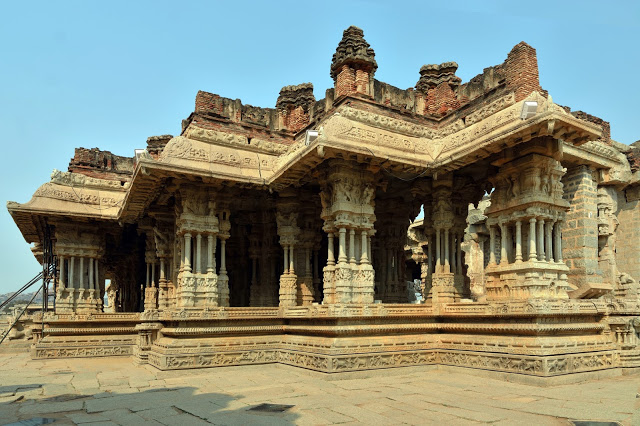 The Virupaksha Temple, dedicated to Lord Shiva, where regular Puja is offered to the deity even today, is a grand monument, said to be more than a thousand year old. Overlooking the fabled Hampi Bazar, the temple comprises scenes from the Ramayana, carved with immaculate detail.

The cluster of temples on Hemakunta hillock adds another perspective. A monolithic Ganesha statue (Sasvekallu Ganesh) uniquely depicted as sitting in the lap of his mother Sati. The Laxmi Narasimha statue (also known as Urga Narashima or Lion headed Diety), a giant awe inspiring sculpture, though badly damaged by invading solders, is a sight to behold.

Krishna temple it is one of the most beautiful monuments located close to Virupaksha temple. It was built by Krishnadevaraya. It’s gopuram is vandalized to a large extent. It is believed that the entire royal family was massacred in this temple. Blood flowed in the temple premise; women and children were set on fire. The burn marks are visible inside the temple.

The Hampi Bazaar, also well known as the Virupaksha Bazaar is almost one km Long Street at the foothill of the Matanga Hill located in front of the Virupaksha Temple. On both sides of the street are an array of old pavilions, which were once the part of the thriving market and also the residence of the nobles. There is a huge Nandi located at the East-end side of the street along with an open platform, which serves as a main stage for the annual Hampi festival. Other attractions of Hampi are the Hazaar Rama Temple, Mahanavami Dibba, the Stepped Water Tank, the Doddakalu Danesh Temple with greek Parthenon type pillar and a miniature citadel, Badavi Linga, Underground Shiva Temple, Queens bath and Hampi Museum at  nearby Kamalapur.

Some of the long distance express trains pass via Hospet. There are a few passenger trains that connects Hospet with nearby cities. Chennai, Mumbai, Bangalore, Delhi, Kolkata, Ahmednbad, Hyderabad has direct train connections. Hampi is only 14 km from Hospet.

The state run KSRTC operates (www.ksrtc.in) a number of schedules from Hospet to various towns and cities in Karnataka. A number of private operators too run regular long distance bus service to Hospet (and to Hubli, a major town 3 hours west off Hospet). You can drive all the way to Hampi via NH13.

Hubli is the nearest airport (about 160km) west of Hampi. Further northwest is Belgaum (about 270 km). Both has moderate connections with cities around the region. Bangalore is more practical option to fly in and take the Hampi Express.

https://www.gounesco.com/heritage/proof/hampi-city-enchanting-ruins/https://s3-ap-southeast-1.amazonaws.com/gounesco.com/wp-content/uploads/2017/08/24141800/Kuduregombe-Mandapa-near-Vitthala-Temple-complex.jpghttps://s3-ap-southeast-1.amazonaws.com/gounesco.com/wp-content/uploads/2017/08/24141800/Kuduregombe-Mandapa-near-Vitthala-Temple-complex-150x150.jpg2017-08-24T14:19:47+05:30aakarpatnaaakarpatna,Hampi,travel,world heritage travel
Hampi of today is only a partial glimpse of its original splendid self. Hence the term ruins. But taking in the sights, one wonders, had it been left untouched by history, how fabulously spectacular, it would have been. Some claim ‘Hampi’ means ‘champion’. One can’t agree more. Hampi was a popular...
aakarpatna@gmail.comProof_userGoUNESCO | Go UNESCO
Tags: aakarpatna, Hampi, travel, and world heritage travel.

« Industrial Utopia
The conquest of the Ganges »