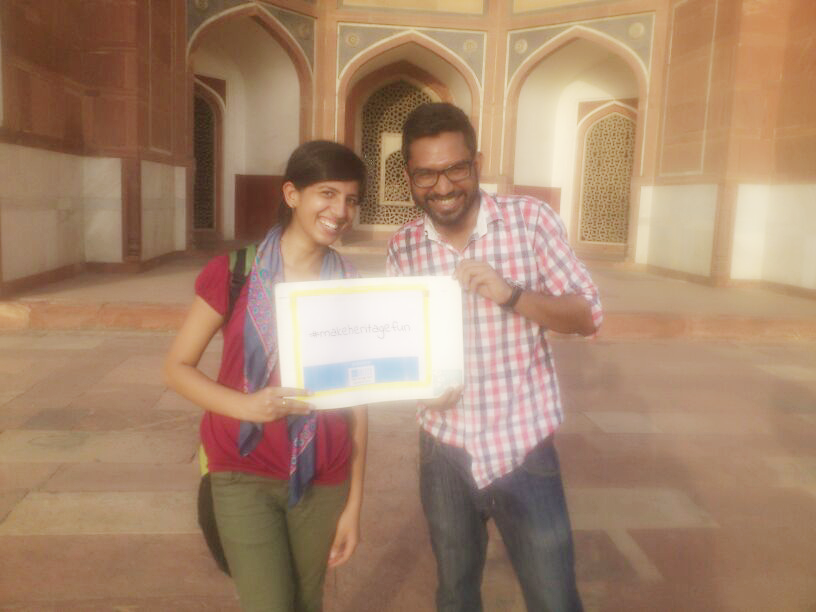 It was my first time with the team of GoUNESCO. My excitement knew no bound. I reached the spot at 3 pm. Earlier I had been to Humayun’s Tomb once with my friend. But this time it felt different .By 03:50 pm every GoUNESCO Campus ambassador along with the other folks those who wanted to be the part of GoUNESCO initiative was there. #makeheritagefun#.  I never imagined it is going to be a Heritage Walk. At 04:00pm everyone was there. The coordinator gave an introduction of GoUNESCO #makeheritagefun# challenge and DELHIGRAM.

After that without wasting time further, the passionate team of GoUNESCO and DELHIGRAM started the walk holding the placards. The coordinator started explaining about the monument that the tomb was commissioned and supervised by Humayun’s first wife Bega Begum (Haji Begum) in 1562-72. The architect was Mirak Mirza Ghiyas, a Persian chosen by Bega Begum. It was the first structure which used Red Sandstone. The complex situated on the bank of the Yamuna River adjoins the shrine of an important Sufi Chistiyya order saint, Nizam al-Din Awliya. The Tomb we first visited was the Tomb of Isa Khan. Isa Khan was an Afghan noble in Sher Shah Suri’s court of the Suri dynasty. He fought against the Mughals for the Suri dynasty. The Tomb of Isa Khan is built in Octagonal shape with an octagonal Garden surrounding the Tomb area. It was said that this tomb was built in his own lifetime.  It is during this walk that many facts about this historical structure came into daylight for me. The complex consists of around 100 graves. It was very fascinating and all these were making me more curious to know more.

The architecture of the Mughals is always been the center of attraction.  I felt Happy when I heard that the restoration work was going in the whole complex by the Aga Khan Foundation in collaboration with Archeological Survey of India. Even though many visitors come to the complex every day there were very less dustbins to throw our wrappers.  Every step taken on the area I encountered something new about the GoUNESCO people and the place (Humayun’s Tomb).

It was through this walk that I got the exact meaning of Sarai, after seeing Araba Sarai. Sarai literally means the (rest house) for the horses. The structure was built by Bega Begum around 1560-1561 CE. This was particularly built for the craftsmen who came for the construction work. There was lots of fun during the walk. #makeheritagefun# team clicked photographs as most of them came with their DSLRs. During the walk we were discussing different architecture of the complex, the restoration work and many other things. 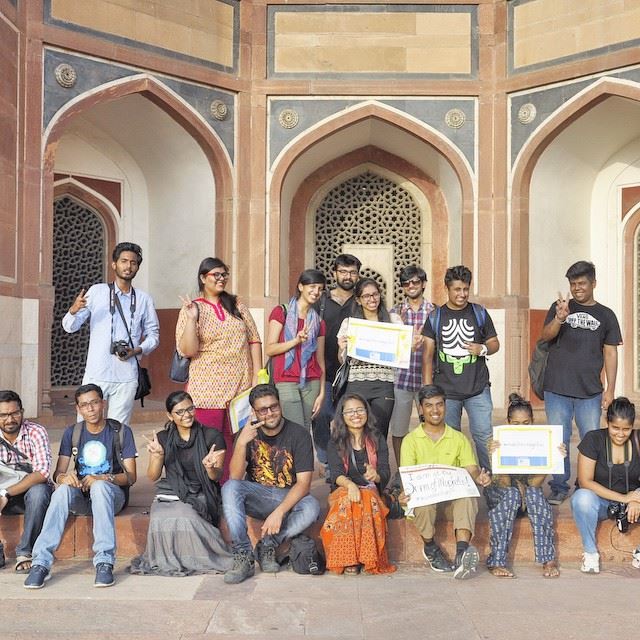 The Best part of the #makeheritagefun# was that everyone had something to share about this heritage site. We continued walking and reached the Char Bagh Garden. It was a Persian style garden with quadrilateral layout and it is believed to be one of its kind in South Asia Region in such a scale. The highly geometrical and enclosed Paradise garden is divided into four squares by paved walkways (khiyabans) and two bisecting central water channels, reflecting the four rivers that flow in jannat, ‘the Islamic concept of paradise’. This is mentioned in the Holy Book Quran. After this we went to the main area of the Complex the place where Humayun’s Tomb is situated. Many historians claims that Turkish and Mughal rule in the Indian subcontinent, also introduced Central Asian and Persian styles of architecture in the region, and by the late 12th century  monuments are all build in this style. Delhi is full of such structures since it was the capital of the rulers back then. The exterior arch of Humayun’s Tomb, showed niches on two levels. The architecture was so beautiful and the view from that place was magnificent. There were many other graves. Out of all graves there was a grave of Humayun’s Elder Brother. The irony here is that though he was Humayun’s brother. He does not own a proper tomb. But Humayun’s favourite Nai (barber) has a good tomb to bost of. Humayun’ brother was a very generous person. His Grave was something different. The time when he was killed. His Head was cut and hanged at the khooni darwaza. After that it was brought back and put it with the remaining body. This can be seen on the grave clearly.

After that we went inside the Tomb I saw the grave of Humayun. Nearby every tomb there was Mihrab(Meharab) facing west or Mecca, over the marble lattice. After visiting these tombs I understood the concept of cenotaph. There we clicked many picture. The Construction of the Tomb and the other Monuments are so good that I felt like spending some more time there just to admire the construction. But has the time was limited we ended our Heritage walk. We waved our hands to each one of them with a feeling that the day was well spent. I am thankful to GoUNESCO and DELHIGRAM Team for giving me such a wonderful opportunity. For me it was a great challenge as I learned many things about the monument. but in a fun way. The #makeheritagefun# challenge was a truly a WOW experience. Looking for more such walks 🙂 :).