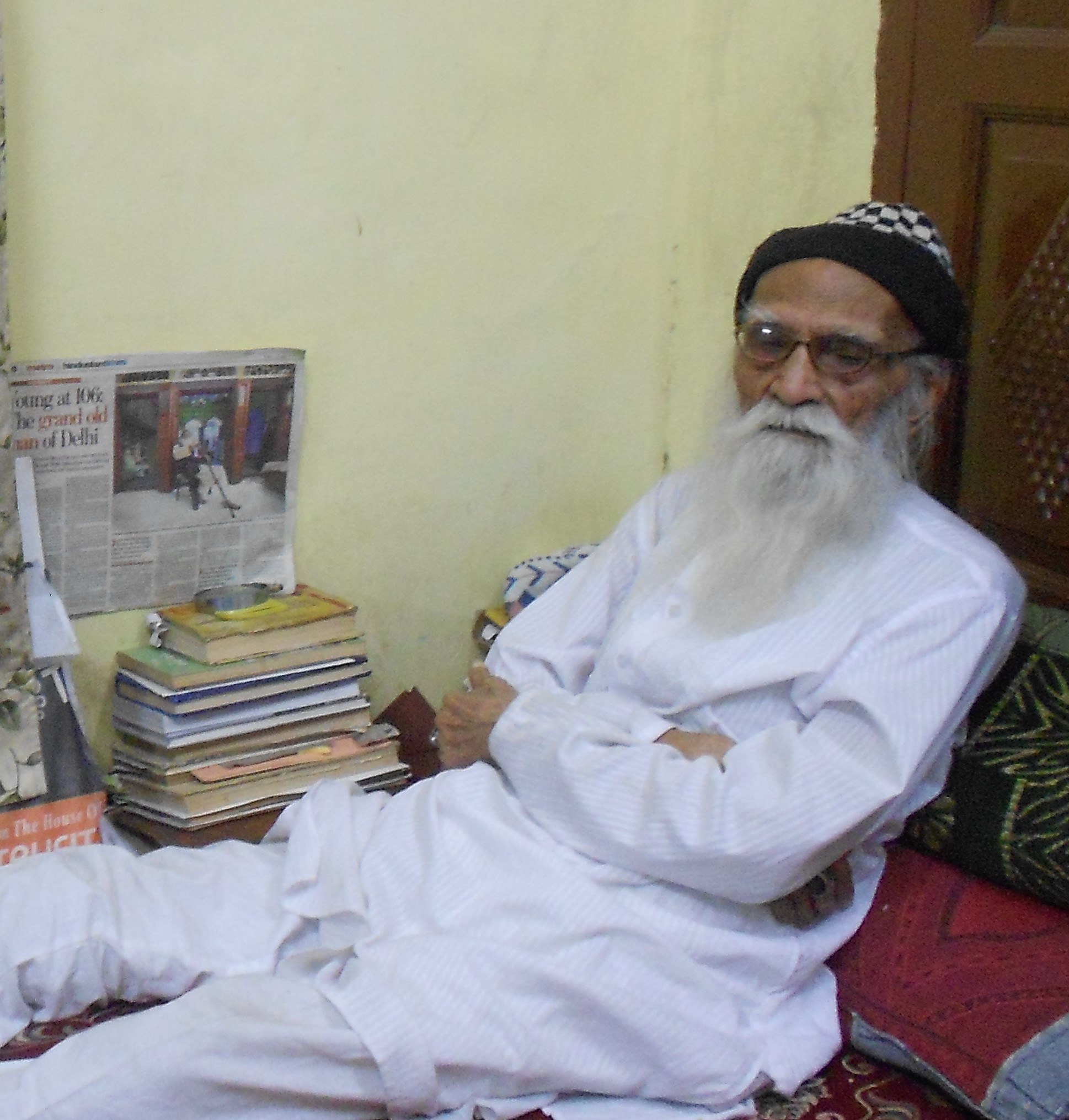 Sitting on his bed with a book “Ujda Dayar”, Mirza Naseem Changezi seems used to visitors coming for interviews. In one corner of his bed is a high pile of books to which he adds this one, and shifts his attention towards me.

“I was born in 1910,” says  Changezi, “I have seen a lot in my life. What do you want to know?” His frail 106-year-old body belies a sharp mind and a robust voice. An hour of conversation with him felt like meandering through the lanes of pre-partition Delhi, now called Old Delhi where he still lives with his family. As an important member of India’s struggle for independence, he recounts what the freedom struggle was like, the India they dreamed of and the India there is today.

In 1925, while still a student at the Anglo-Arabic School, he was inducted into the Indian National Congress. As young boys, they were trained under the Congress leader Raj Bihari Bose. One of his earliest assignments was sheltering the famous revolutionary Bhagat Singh, who was executed by British authorities for throwing a bomb in the assembly while it was in session.

He recites the incident to me which is still fresh in his memory. “I could not have let him stay in my home. A Sikh staying in a Muslim dominated area would have aroused suspicion. I had a friend Daya Ram who stayed in Daryaganj. That is where his lodging was arranged. I used to get ‘prasad’ and ‘kada’ from the Gurudwara and deliver it to him,” says Changezi.

“Sometimes he used to offer water to the travelers at the drinking tank in Daryaganj. He confided in me that he was making a bomb, but it wouldn’t kill anyone. While I wanted to work towards freedom and watch ourselves achieve it, he wanted to have it even at the cost of death. He was finally hanged by the authorities,” he adds further.

It must’ve been a very dangerous task. Didn’t you face the police after this?

“We were not as visible as other leaders. It was a part of our job to work incognito,” he says.

Another feather in his cap is the incident when he, along with his friends, Salauddin and Hansraj Wireless, threw a bomb at the railway carriage carrying Lord Irwin. “Hansraj had discovered a new technique of making bombs and hence, was called ‘Wireless’. On the railway line near Hardinge Bridge, we set the bomb and hid in the jungle. Pragati Maidan used to be a jungle at that time. The bomb exploded when Lord Irwin’s carriage passed by. Later, we learned that he had survived the attack.”

One soon realizes that Mirza sahib possesses a distinct flair for narration. His words effectively conjure up old black and white photographs which get colored through his memories. His tales are peppered with poetic couplets and enlightening advice while he has his audience in rapt attention.

“I used to spend my time on the banks of Yamuna. I never whiled away my time as I see many youngsters doing nowadays. A mind unoccupied is a breeding house for evil ideas (as a proverb goes). Now in my free time, there are books to be read,” he said, pointing towards the pile of books lying in the corner of his bed.

The conversation swiftly segued back to his account of the 1940s. The Second World War broke out. In between sips of coke, he narrates how as a young man, he was ordered to enlist in the army. “I went to South Africa during the war. As a soldier, I fought in the LMG (Light Machine Gun) unit against Hitler’s army. Bullets rained from the sky like a hailstorm. I was wounded in the leg twice.” Reliving those times, he even gave a demonstration of the general’s command.

Sifting through the memories of the independence struggle, we reach the natural climax- the independence itself and the bloodcurdling violence that ensued in the aftermath of India’s partition. For the first time, his face bears a frown and his voice betrays a strange mix of anger and sadness.

“The water in the wells of Delhi had turned red. Thirty-five thousand corpses of women were found in these wells; women who chose death to escape rape.”

On being asked whether he ever thought of shifting to Pakistan, his voice raises with consternation. “For every inch of this land, my ancestors have made numerous sacrifices. This is the place where my forefathers are buried. The ghats of Yamuna, the lanes of Delhi, the Jama Masjid. Could I have found these in Pakistan?”

Not only is he a repository of historically relevant personal anecdotes, he also remains abreast with the latest happenings around the world. For the current outbreak of dengue in Delhi, he has a word of advice to give. He says, “There are no concrete measures of prevention from the side of the government. The breeding grounds of mosquitoes have to be found and thoroughly cleansed. You see, I was as an anti-malaria inspector.”

His disillusionment with the authorities should not come as a surprise. After braving through the rough and tumble of the long and arduous freedom struggle, it pains him to see the communal tensions in a country they fought for so militantly.

“This is not the country we envisioned. There never were so many divisions between different religious communities. The seeds of the discord were sown by Britishers,” he laments.

As the evening comes to a close, it’s time for our meeting to end like any good story. As phenomenal a raconteur as he is, we part with this couplet recited by him:

(On this earth will be left an imprint or a painting of those who are dead and gone;

I shall be no more, but my footprints shall continue to live on)

Get Lured by the Public Spaces of Bangalore

The Victoria and Albert Museum: a museum for the masses