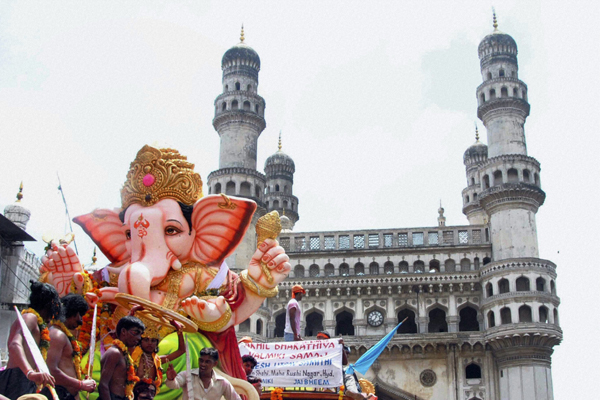 The festival, Sankranti is celebrated for four days in Andhra Pradesh as below:
Day 1 – Bhogi
Day 2 – Makara Sankranti-the main festival day
Day 3 – Kanuma
Day 4 – Mukkanuma
The day preceding Makara Sankranti is called Bhogi and this is when people discard old and derelict things and concentrate on new things causing change or transformation. At dawn people light a bonfire with logs of wood, other solid-fuels and wooden furniture at home that are no longer useful.
In many families, infants and children (usually less than three years old) are showered with the Indian Jujube fruit Ziziphus mauritiana, called “Regi Pandlu” in Telugu. It is believed that doing this would protect the children from evil eye.
The second day is Makara Sankranti. People wear new clothes, pray to God, and make offerings of traditional food to ancestors who have died. They also make beautiful and ornate drawings and patterns on the ground with chalk or flour, called “muggu” or “Rangoli” in Telugu, in front of their homes.
On the day after Makara Sankranti, the animal kingdom is remembered and in particular, the cows. Young girls feed the animals, birds and fish as a symbol of sharing. Travel is considered to be inappropriate, as these days are dedicated for re-union of the families. Sankranti in this sense demonstrates their strong cultural values as well as a time for change and transformation. And finally, gurus seek out their devotees to bestow blessings on them.

On the third day, Kanuma is celebrated. Nowadays Kanuma is not being celebrated widely as it used to be but is an integral part of the Sankranti culture.
Fourth day is called Mukkanuma which is popular among the non-vegetarians of the society.
People in Coastal Andhra do not eat any meat or fish during the first three days of the festival, and do so only on the day of Mukkanuma. On this occasion, in every town and city, people play with kites and the sky can be seen filled with beautiful kites. Children and elders enjoy this kite flying occasion.

The festival history has started in 1813 in Hyderabad & Secuderabad regimental bazzar. Plague disease broke out in Twin Cities of Hyderabad & Secunderabad, claiming thousands of lives. Before this a military battalion of Hyderabad is deployed to Ujjain, knowing about the Plague in Hyderabad the military battalion prayed to the Mother Goddess in Mahankaal Temple – Ujjain, Madhya Pradesh, that if people were saved from the epidemic they would install the idol of Mahankali back in their city. It is believed that Mahākālī destroyed the disease and keeps pestilence at arms length. Military Battalion came back to the city & installed an Idol and every year people offered Bonalu to Mother Goddess Mahankali.

Bonalu is celebrated in various parts of the city. On the first Sunday of ‘Aashaadam’, celebrations are held at the temple at Golconda Fort. On the second Sunday, at Ujjaini Mahakali Temple in Secunderabad and Balkampet Yellamma temple in Balkampet, and the third Sunday, at The pochamma and katta maisamma temple of chilkalguda and the Matheswari temple of Lal Darwaza in Old City of Hyderabad. Akkanna Madanna temple in Haribowli, Muthyalamma temple in Shah Ali Banda are among other temples where Bonalu are celebrated. Every year, lakhs of devotees congregate to pay obeisance to Mahankali.
On this special occasion women dress up in the traditional Sari combining it with jewels and other accessories. Teenage Girls wear Half-Sarees/Lehenga Choli combining it with jewels in order to bring out the traditional grace of the attire.
Some Tranced women dance with balancing pots (Bonam), to the rhythmic beats of drums in honour of the local Goddess. To ward off evil spirits, in olden days, people used to sacrifice a male buffalo in front of the temple, but now, roosters are sometimes sacrificed.

In Telangana, Clay Ganesh (Matti Vinayakudu in telugu) and Turmeric Ganesh (Siddhi Vinayakudu in Telugu) is usually worshipped at homes along with plaster of paris Ganesha.As per the tradition of their respective families, the domestic celebrations come to end an end after 1,3,5,7 or 11 days where majority of the idols are taken to Tank Bund Road and immerse in Hussain sagar. 11th day celebrations at Tank Bund Road takes entire night and fills the area with enormous crowd immersing various kinds of Ganesh idols. People comes from all over India to witness these celebrations.Khairtabad Ganesh is one of the tallest and most famous idols in India. Balapur Ganesh idol is well known for its Laddu.
In Telangana and Kerala, modakkam (rice flour dumplings stuffed with coconut and jaggery mixture), Laddu, Vundrallu (steamed coarsely grounded rice flour balls), Panakam (jaggery, black pepper and cardamom flavored drink), Vadapappu (soaked and moong lentils), “Chalividi” (cooked rice flour and jaggery mixture), etc., are offered to Ganesha along with Modakams. These offerings to god are called Naivedyam in Telugu. Traditionally, the plate containing the Modak is filled with twenty-one pieces of the sweet.

Bathukamma  is Telangana’s floral festival celebrated by the Hindu women of Telangana and neighbouring states in India. Every year this festival is celebrated as per Telugu version of Hindu calendar in the Bhadrapada Amavasya, also known as Mahalaya Amavasya, usually in September–October of Gregorian calendar. Bathukamma is celebrated for nine days during Durga Navratri. It starts on the day of Mahalaya Amavasya and the 9-day festivities will culminate on “Saddula Bathukamma” or “Pedda Bathukamma” festival on Ashwayuja Ashtami, popularly known as Durgashtami which is two days before Dussehra. Bathukamma is followed by Boddemma, which is a 7-day festival. Boddemma festival that marks the ending of Varsha Ruthu whereas Bathukamma festival indicates the beginning of Sarad or Sharath Ruthu

Bathukamma represents cultural spirit of Telangana. Bathukamma is a beautiful flower stack, arranged with different unique seasonal flowers most of them with medicinal values, in seven concentric layers in the shape of temple gopuram. In Telugu, ‘Bathukamma’ means ‘Mother Goddess come Alive’ and Goddess Maha Gauri-‘Life Giver’ is worshipped in the form of Bathukamma – the patron goddess of womanhood, Maha Gauri Devi

Ramadan is a time of spiritual reflection, improvement and increased devotion and worship. Muslims are expected to put more effort into following the teachings of Islam. The fast (sawm) begins at dawn and ends at sunset. In addition to abstaining from eating and drinking, Muslims also increase restraint, such as abstaining from sexual relations and generally sinful speech and behavior. The act of fasting is said to redirect the heart away from worldly activities, its purpose being to cleanse the soul by freeing it from harmful impurities. Ramadan also teaches Muslims how to better practice self-discipline, self-control, sacrifice, and empathy for those who are less fortunate; thus encouraging actions of generosity and compulsory charity (zakat).

It becomes compulsory for Muslims to start fasting when they reach puberty, so long as they are healthy and sane, and have no disabilities or illnesses. Many children endeavour to complete as many fasts as possible as practice for later life.

Exemptions to fasting are travel, menstruation, severe illness, pregnancy, and breast-feeding. However, many Muslims with medical conditions insist on fasting to satisfy their spiritual needs, although it is not recommended by the hadith. Professionals should closely monitor individuals who decide to persist with fasting.Those who were unable to fast still must make up the days missed later.

Many in Hyderabad wear new clothes, visit family members, exchange Eid cards and give presents of sweets and small toys to children on Ramzan Id or Id-ul-Fitr that marks end of Ramzan month. Shops have been colourfully decorated and hectic shopping is on in the city. Havenots are given food in charity known as zakat al-fitr during Ramzan. Food items such as barley, dates, raisins or wheat flour, or its monetary equivalent is given to the poor in the community.