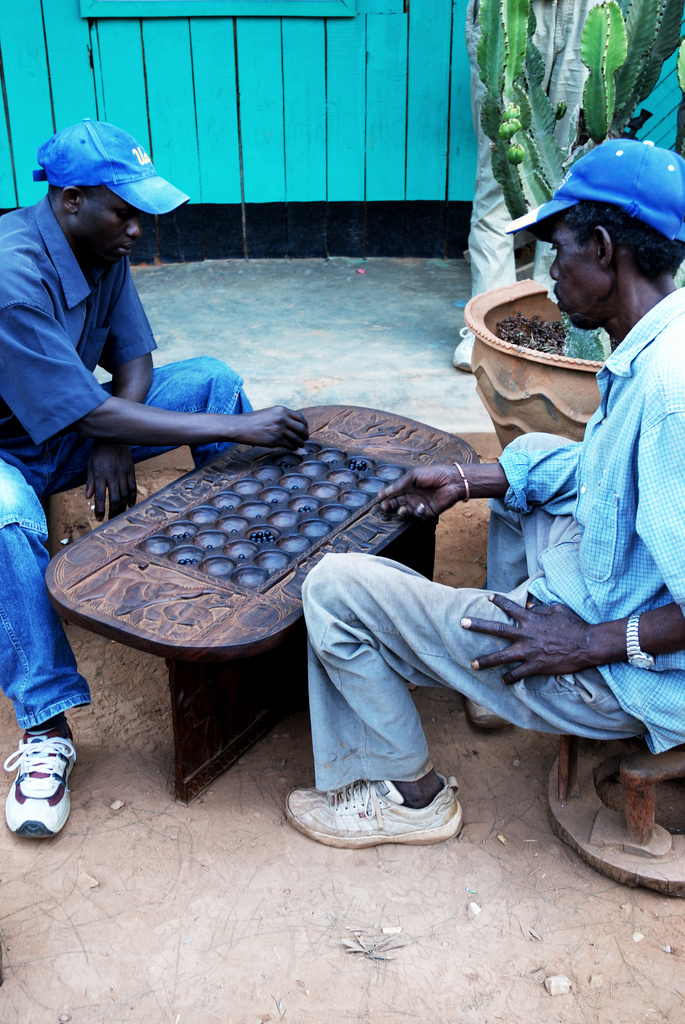 Igisoro is one traditional game in Rwanda else in Burundi and it is called Omweso in Uganda and Mancala games in East African. It is a game had its origin many years ago, was oldest game for old Rwandans, game for the Rwandan kings played with their friends. It is a game for children, young and adult in the country.

To start, each person play 2 times for filling the empty pits of 2rd row of his side, it called Guca umuvuno).Then,one person starts to play  for winning, it called Kurasa ,he/she start with 4 seeds return back on his 2rd row of his/her side, he/she  need to account the seeds to help to end in pit with seed, then he/she  wins by taking the seeds  from the pits of his/her opposite player, those pits  need to have both the seeds. If the last seed stop in empty pit, the second person play also by choose a pit with 4 seeds  on his side and move placing 1 seed in his pit, everyone need to account the seeds and look where he/she can play and win.

There is some rules of igisoro game:

-You can not choose the pit of 1 seed for playing

-You play from the next pit of the one you take the seeds.

-You need to account the number of seeds before to play.

-You Stop to play when you stop in empty pit.

-To play is to return back in your side but there is exception chance, when you see you can win, there is 4 pits parallels (2 right side and 2 left side) you can play by choose the seeds in one of those pits by looking the best way to win. it called Guteba or Gukuba.

To win, it is when one player has empty pits or with 1 seed because it is not allow to play 1 seed but some countries like Burundi and Congo, to win it is when all pits are empty (0 seed).

This game is good, it help the players to pay attention, to think so much, to account then you decide how and where you play. It is good heritage game for the Rwandans and future Rwandans to know game of the grandparents. It is region game from different East African countries; it can connect the peoples and creates friendship between the Rwandans and others. It is a playing game every time (day or night).