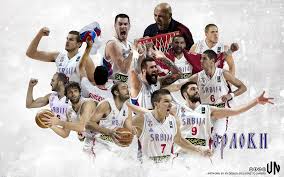 Thinking about sports and my country, I find it quite difficult to choose only one to talk about. One of the reasons is that we tend to be good at everything, or almost everything. 🙂 However, I’d like to write about basketball, partly because that’s the sport I really enjoy and I never miss a game whether it is a local game or the World Championship.

Many think of a Serbian national basketball team as a direct descendant of Yugoslavian national team. Although I wasn’t born in the era of the greatest Yugoslavian basketball players, I’ve grown up listening about them and their game. The saying that was very popular at that time was “The Americans invented it, the Yugoslavs perfected it.” Many of them played in the NBA later, including Vlade Divac, one of my idols when I was kid.

Cheering was always of great importance for all the Serbs as well as our sportsmen. The tradition of greeting out sportsmen lasts for as long as I can remember. They are always greeted at the main balcony of the Parliament which is always followed by the music and celebration

The song that was sung before was “Igra Rock ‘n’Roll Cela Yugoslavia” and the lyrics goes:

Let’s gather all the colors falling from the sky

A touch is sufficient, that is all we need

Let’s forget about yesterday and look at tomorrow

The answers you’re looking for aren’t that far away

Let your mind be your own concern

Don’t let the people tell you what to do, think for yourself

Everything around you is straightening and bending

Everything around you is straightening and bending

Today we have a new hymn called ‘’Igraj & Pobedi”. The following link actually shows one of the celebrations which took place in 2014.

Serbia’s waiting for you to come back from afar

So that our country is again the world champion

Basketball players on the balcony

A great thing about sport is that it gathers people, whenever there’s an important game everyone gathers to watch it together. Sometimes, we do it at home which includes my 84 year old grandma and sometimes it means going to the city center and meeting up with a group of friends. When you see your sportsmen fight for the medal it makes you so proud, as if you were there fighting with them.

Last year I had a chance to work with the Basketball Federation of Serbia. Every year they organize a Belgrade Tournament which is always a great opportunity for basketball players to practice and play against other national teams.  Last year we hosted the teams of Russia, China and Venezuela. As an attaché for the Chinese and Venezuelan teams, I had an opportunity to see all the practices and games first hand and it was such a great experience.

I’m counting down till the Olympic Games in Brazil this year and wish that one day I’ll have a chance to be part of such an amazing sport event.
The heritage of sport

Sa Strumpa: the persistence of ancient cultures of sports