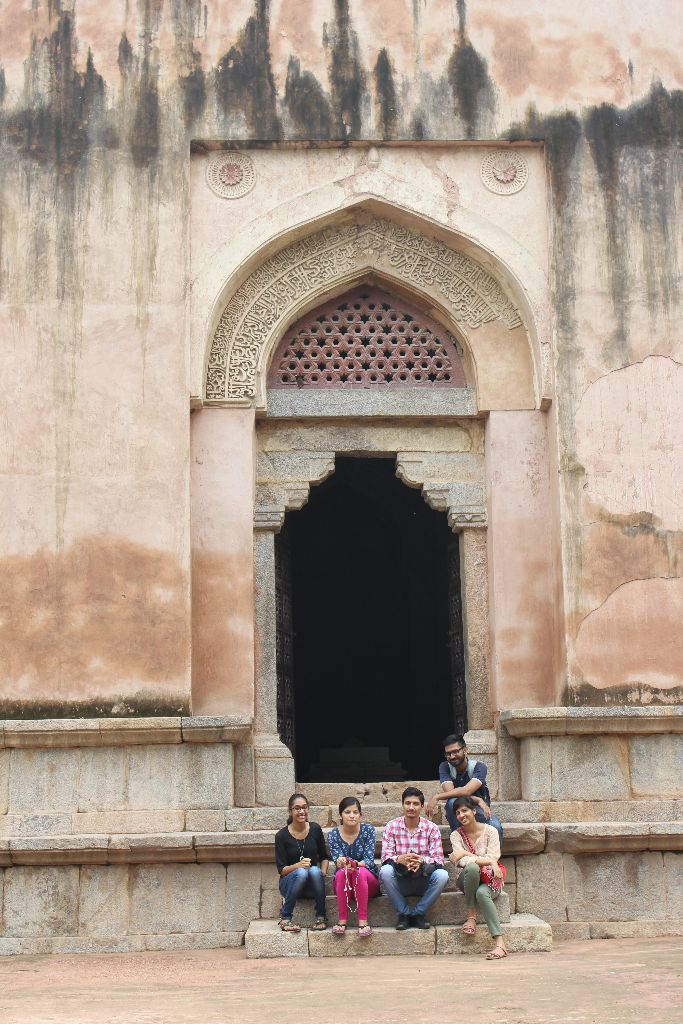 Walking through the pathways constructed in between a beautiful lake and lush green gardens with six new people from different backgrounds unfolded different aspects of the same thing.   While some were found to be interested in exploring the history of that place, the other one closely concentrated on the architecture of the same. Some appreciated it aesthetically while other could reveal it’s cultural aspect. So a combination of everything resulted in what I would say a perfect Sunday morning spent in the arms of nature with splendid winds blowing all around.

Hauz khas complex is truly meant for individuals belonging to any age group, as exploring and visiting it not only requires an interest in history and culture of the city but also provides as a major hub for the youth population of the country and the world outside. It not only excites people who are in interested in unfolding the historical aspect of the city but the village constructed just a decade or two ago has attracted a large population of youths who just want to hang out and spend their day enjoying the amenities of the modern world.

Hauz (water tank) khas (royal) literally translated as royal water tank is often considered as an epitome of tranquility. Constructed under the orders of Alau-din-khilji, it was meant to supply water to the people living in the second medieval city ‘Siri’ and thus was named Hauz-i-alai after him. A small structure erected over a little elevation which is now visited by the tourists, once marked the centre of this beautiful reservoir constructed for the well fare of the people living in the neighborhood. This can open way for one’s imagination as to how big this reservoir would have been back then. The inlet of the reservoir was clogged in the coming years after the rule of Alau-din-khilji which was later on filtered and cleaned by Sultan Firoz Shah Tughlaq, a ruler of Firozabad, the fifth medieval city of Delhi and hence was then named Hauz Khas.

Feroz Shah Tughlaq, though not considered as a very great ruler is still an important name in the list of conservationist. He not only constructed a L-shaped madrasa along the reservoir but the construction of a mosque and his own tomb is considered as an icing on the cake for this complex.

The madrasa he constructed was considered as one of the most important Islamic institutes of it’s time where young minds were enlightened and dawned upon by the knowledge of different aspects of reality and metaphysics. The teachings not only included the spiritual and holy aspects but also focused on the practical knowledge of the world involving science and mathematics. What now serves as a mere hub of enjoyment was once a place of pure knowledge where young minds were ignited. The location of the madrasa was chosen such that the student not only feed their minds with mere knowledge but also stay in close connection with the nature in order to refresh their minds timely resulting in complete mental and physical well being. Such a fascinating location could only make me feel jealous after being reminded of those jail-type classrooms available today. After all ‘who doesn’t like to sit in the womb of nature exploring the different aspects of reality?’ One of the interesting fact was  that the teachers once lost were engraved close to the classroom so that the blessings of the teachers were always showered upon their students. Even minute things such as a small opening in the wall of the student’s room were enough to fascinate each one of us and mingle us up to know more about that place.

The most exciting part of this activity was interviewing people all around. Some people seemed reluctant to stop by and give away their five minutes while few others opened their heart up and enjoyed talking about it. When asked about questions like ‘What interested them to visit such a place?’ the most common answer heard was the view and scenic beauty it provides to it’s visitors. One can just sit, relax, talk and laugh for as long as they want without even realizing what time of the day it is. Be it morning, noon or a splendid evening, it provides a great relaxing hub for the people visiting this place.

When popped up by another question as to “What improvement can be brought about in this place”, people responded differently. Some said it is just perfect in itself while others responded about the cleanliness aspect which should be taken into serious consideration, while few others showed their concern regarding it’s conservation. The responses of international tourists were quite different from those of the domestic ones. While most of the international tourist visited that place not just to enjoy and relax but most importantly to get acquainted with the history of that place, domestic ones seemed a little less interested and unaware about the same. This made me reflect, maybe we don’t really appreciate the things that are easily accessible to us but feels like knowing  it in and out only when we have to put in a lot of efforts to reach that place. Exploring Delhi from the scratch is what my motive has been since that day of acquaintance with people as I was one among those people who roamed just for fun before getting acquainted with the makeheritagefun program.