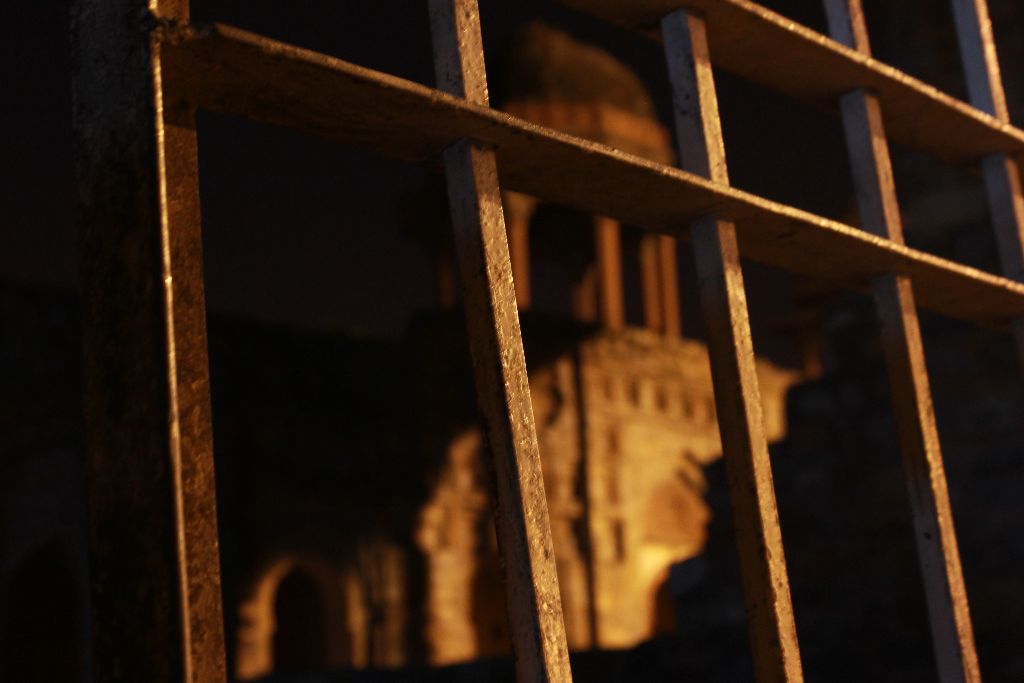 The task #exploreTheUnexplored  was surely the most awaited task for me in this GCA program. And , so in order to make this task more interesting (to me), I trashed all the other old ideas about unknown structures and instead went for a blind search for a heritage and hence decided a walk to walk through the lanes of Mehrauli( south of Delhi). Mehrauli, originally Meherwali, is a home of heritages, the most famous one being the Qutub complex and the Mehrauli archaeological park. But, Mehrauli has way more things than these two . I walked along the boundary line of the qutub complex and then entered the actual Mehrauli area. Welcomed by the market place , I started doubting my decision of choosing Mehrauli for the task as the dense locality and the crowded streets gave no essence of any heritage building. Hopelessly, i asked few of the shopkeepers that whether i could find any structure in the area , and most of them replied ,” Go to Qutub Minar , what are you doing here”. Then after asking few more guys , i got an old guy , a banana seller , who told me about Jahaz Mahal . I then followed the route to the Mahal and finally reached the Mahal.

Although in ruins the Jahaz Mahal, towers like a ship over the congested and overcrowded Mehrauli neighborhood. Interestingly, located next to the Jahaz Mahl is a huge lake called Hauz – i – Shamsi, which was  dug out by Sultan Iltutmish in 1230. So, it was kind of bonus for me . And, i came to know that Jahaz Mahal was constructed almost 200 years later during the Lodi Period and because of its reflection on the huge lake it gets a ship like appearance and hence the name Jahaz Mahal.

The U – shaped Jahaz Mahal was probably surrounded by a moat, but right now there is no evidence of it . A flight of stairs on the sothern end probably lead to Jahaz Mahal via a wooden draw bridge.The wooden plank of the draw bridge have long vanished and presently the entrance is through the Eastern side, where part of the moat is covered up to give access to the Jahaz Mahal.

While i couldn’t figure out what the structure was meant for , as few historians  believe it  to be a Sarai (Inn) for pilgrims while other opine it to be a pleasure house of the royal family. But, the presence of a Miharb on the western wall  indicate that one part of the building was a mosque.

The most distinctive feature of the Jahaz Mahal are its Chatris decorated with glazed blue tiles( very much similar to that of Sheesh Gumbad).The corner chatris are square and smaller in size while  the chatri at the South – West corner have long toppled.

The place is hardly visited by  any tourist, only the locals come and play  on the ground opposite to it .Also lots of gambling games are played here .But comes a time when the mahal is treated like a mahal , it becomes the centre of attraction during the festival of Phool Walon ki Sair, celebrated in the month of November. The origin of the festival of Phool Walon ki Sair dates back to the late 18th century when the son of the Mughal Emperor Akbar II, Mirza Jehangir was imprisoned by the British. Mirza Jahangir taunted the British Resident Archibald Seton. The young prince also took a shot at Seton at the Red Fort, but missed his target and killed his orderly instead.His mother Mumtaz Mahal (not to be confused with the wife of Shah Jahan) vowed to offer chadars at the Darga of Qutbuddin Bakhtiar Kaki and the Hindu Jogamaya Mandir on the release of his son. And, Ever since the festival is being celebrated with devotes, irrespective of religion, offers colorful chadars and decorated floral fans to the dargha and the temple.

Festival continues with kite flying, wrestling bouts and Qawwali and the non – descriptive monuments of Mehrauli, like the Jahaz Mahal,  gets the much needed attention. I was told that many famous Qawwali artists come during the festival . The festival changes the whole mood of the place, the whole place is cleaned up , a huge stage is made on the southern part of the Mahal and the whole place gets a makeover.

The huge Hauz – i – Shamsi Lake, located next to the Jahaz Mahal is an interesting mix of history and legend. As, It is believed that the Prophet arrived in Iltutmish dream and mentioned about the suggestible site of the tank. Next day Iltutmish visited the place and found the hoof marks of the Prophet’s horse. Iltutmish had the tank dug and in the centre of the tank he made a pavilion housing the stone with the hoof marks of the Prophet’s horse. The Moorish traveller Iban Batuta was struck by the vastness of the tank.Today the tank is nothing but a  shadow of its past and probably it has also shrunk in size and  the water looks dirty as well. A lone domed pavilion stands on the South West corner of the lake.

As a conclusion , I can say that over the years the lake was reduced to a filthy pond and the mahal lost its reflection. It also lost its southern wall. Most of the blue ceramic tiles on the domed pavilion over the central gateway were lost. Yet there is beauty in this dilapidation. The chhatris show delicate carvings.  The arched chambers promise serenity. Hence the condition of the Mahal is quite hard to digest as,  it also deserves the same amount of respect that other heritages do.

HERE IS A TIME-LAPSE VIDEO OF JAHAZ MAHAL 🙂