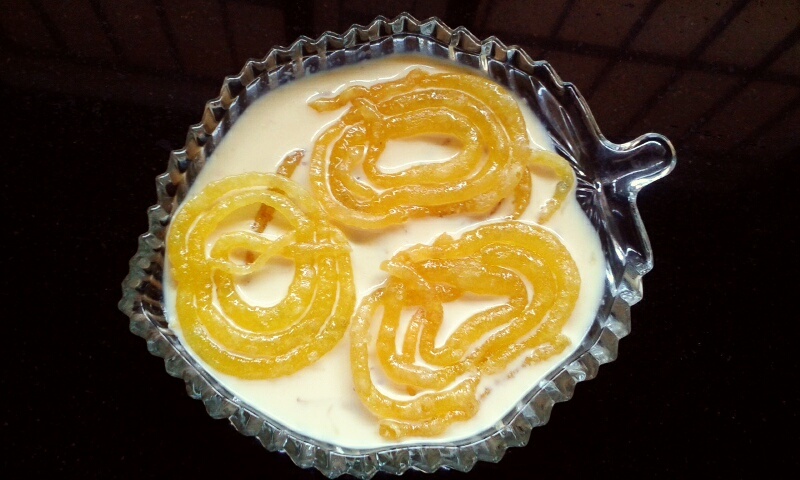 Jalebi through is a sweet popular in regions such as South Asia, West Asia, North Africa and East Africa. It is made from deep-fried maida flour, soaked in circular shapes and then soaked in sugar syrup. With the passage of time, it gained a lot of popularity in Iran and the Indian subcontinent – Pakistan, India, Bangladesh, Afghanistan, Nepal, Bhutan, Sri Lanka, and Maldives. It is served either hot or cold. Many a times, it is confused with other sweets such as imarti and chhena jalebi.

Origin of the name Jalebi

The origin of the name Jalebi has a lot of conspiracies surrounding it although it is very clear that it has multiplicity present of names constituted to different languages for example in Nepali (Jeri), Assamese (Zelepi), Sylheti (Zilafi), Urdu (Jalebi), Lurish (Zuleybi), Arabic (Zalebi), Somali (Mushabbak), Egyptian Arabic (Meshabek), Tagalog (Jalebie) and Harari language (Mushabakh).

Lets take a moment to discuss about the history of this sweet-dish. The almost 500-year-old dish was brought to India by Turkic invaders. In 1450 in an authorship by a Jain author it is mentioned in a record with the context of a dinner at a rich merchant’s house. This account has been cited in cookery books published in later centuries in 17th century classic Bhojan-kutuhala by Raghunatha. This really gives evidence that it has existed in the Indian subcontinent for at least 500 years.

Variation in the Ingredients from region to region

There is a lot of variation in the ingredients from region to region when it comes to making the it. In some areas of India, the mixtures consists of urad dal and rice flour with some besan and wheat flour, in others it includes semolina and baking powder. In Bengal it consists of chhena and khoa. Without a doubt, regardless of ingredients, jalebi is one of the most popular sweet meals in South Asia including Afghanistan where it is served with fish during the winters. It can even be dipped in rabri or milk.

Apart from its popularity as a sweet meal, it has been a valuable asset in media and popular culture as well. A few notable examples include its usage in the advertisement of Dhara Ghee, Four Tet named a song from his 2013 record Beautiful Rewind ‘‘Parallel Jalebi’’, in 2015 Bollywood film Phantom had a popular song ‘‘Afghan Jalebi’’ and in 2016 for the movie Lion the dish was used as a plot device to revive a childhood memory.

The Bhatial songs of Bangladesh’s rivers

The mysteries behind Saint Basil’s Cathedral