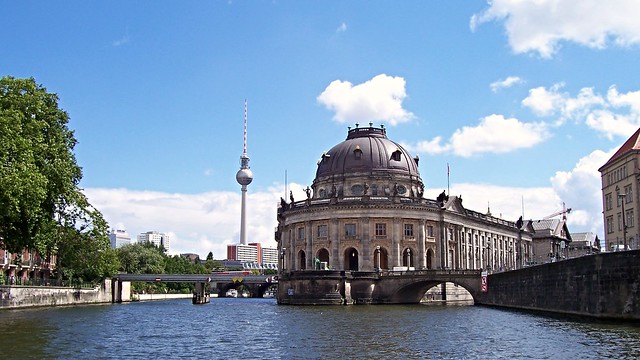 Cloudy sky and constant showers, wind that gives me the chills, smiling tourists, multitude of languages on the streets I have never heard before and the thought that in one single day I have crossed 5 times the frontier that was almost hermetically closed for decades. I am in Berlin.

I’ll admit – maybe the month of March is not the best time to visit northern capitals such as Berlin. But I just couldn’t pass on the opportunity to see the town that I have heard so much about. None the less I had a strange feeling of not expecting anything and expecting everything at the same time. And I couldn’t be more in the right.

If you want the monumental palaces, well organized royal gardens and uniformed historic city center with noble houses that are architectural wonders, with beautiful fountains and spectacular squares, maybe German capital is not your first choice. But this urban, alive, bustling city is rapidly building the image as one of the most important European hubs for artists, creators, young people and alternative way of living, while remaining a relevant financial and economic, but also political, center of Europe.

There is something to be said for accepting the difficult history, less then glorious past and moving forward in the way that German capital manage to do. Of course, the main story revolves around the idea of the divided city. On one side you have the western Berlin, open to the progress achieved by the western world after the WWII. Here is bigger part of the city with the Tier garden, Charlottenburg, the Reichstag building, open squares and developed system of public transportation. On the other, the famous Unter den Linden street, Museum island, both Catholic and Protestant Dome, Opera house and Alexander Platz, but also fine examples of the socialistic civil architecture. How united, these neighborhoods witness the whole other way of coexistence, one that involve cooperation, collaboration and mutual help.

One of the most important touristic treasures of German capital is, without a doubt, the Museum Island (Museuminsel). Surrounded by the river Spree, one can fully immerse oneself in the history, painting and the archaeological wonders of the world. From the ancient Egypt to the finest examples of Greek and Roman art and culture, the rests of the Assyrian lost cities to the famous bust of the Queen Nefertiti, from the African relics to the recreation of the Ishtar´s Gate and Byzantine art, this place is a true oasis for history and theology geeks.

Personally, I found the Alte Nationalgalerie (National Gallery) most staggering of all five museums located on the island. This 3-floor building hides master pieces from well-known authors such as Edouard Manet, Pierre-Auguste Renoir, Claude Monet, Karl Friedrich Schinkel or Caspar David Friedrich, but it is also an amazing place to discover less-known German artists that beautifully testify to the German culture and history.

Museuminsel was enlisted on the World Heritage List in 1999.