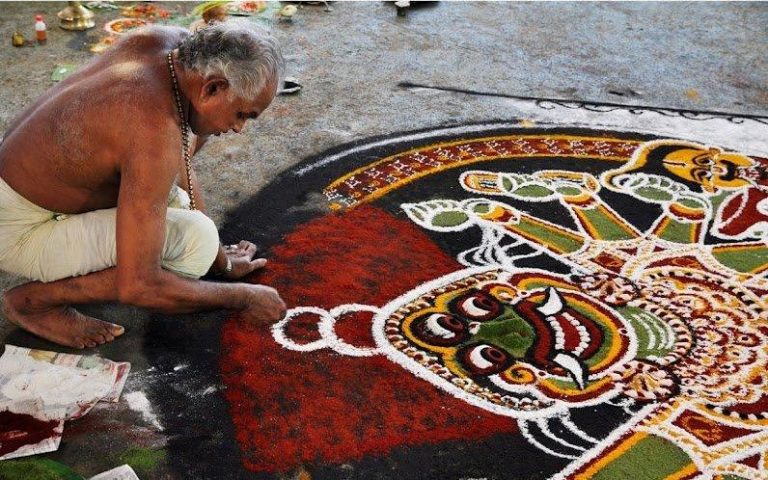 This article is written by Ananya Mahir and content research was done by Kaavya Lakshman. It was originally published on www.nazariya.in,  an initiative that is connecting rural India to metropolitan cities

And you thought Rangoli is unique to North India? Kalamezhuthu is a unique form of floor art that is predominately found in South Kerala

As recorded on June 27, 2016 in The Hindu, “for many students of Bharatiya Vidya Bhavan, Kodunganoor, it was perhaps their first glimpse of how five colours sourced from nature could be used to create art. The students had gathered at the school on Saturday afternoon to watch Theeyattu, an art form native to Central Travancore, as part of a cultural outreach programme organized by the Bharatiya Vidya Bhavan, Thiruvananthapuram centre, and the Infosys Foundation, Bengaluru. The students watched as Theeyattu practitioners Vaikom Sasidhara Sarma, Sreejith Sarma, Sarath Sarma, Hari Krishnan, and Vijayan Varriar, used various coloured powders to draw a large figure of Bhadrakali using their thumb and index finger in a ritual called Kalamezhuthu.”

In Malayalam, the literal meaning of kalam is picture and ezhuthu is the act of drawing. It is also known as dhulee chithram, as the painting is made solely of powder. The powder used is extracted solely from natural products. Kalamezhuthu is a unique form of floor art that is predominately found in South Kerala. It is a ritual art, done mainly in temples as well as at the entrance and courtyard of homes as a symbol of welcoming the deities in the house. It is a harmonious blend of Tribal, Dravidian and Arian cultures. Its association with sacred groves and tantric elements, is a later addition.

The legends are mainly associated with goddess Kali, who is the central depiction of the art. When the Asuras Dharukan and Dhanavendran underwent severe penance, they were granted the privilege by Lord Shiva such that they wouldn’t be vanquished by any man. Additionally, every drop of blood spilt on earth will give birth to hundreds of Asuras. The grant of these wishes emboldened them and they created havoc in all the three worlds. When Lord Shiva got to know of this, he opened his third eye and created the fierce Kali who was an incarnation of Shakti, consort of Shiva. Kali being a woman could kill them, and when the blood spilt, she drank all of it before it touched the ground. Thus, she vanquished them all. Narada went to Kailash, the abode of Lord Shiva, and recounted the victorious battle between Kali and the Asuras. While narrating, he drew a terrifying illustration of the events, thus giving birth to Kalamezhuthu.

Ritualistic festivals in Kerala begin from the Malayalam month of and it continues through the harvest season, until the pre monsoon showers. Kalamezhuthu is a part of the worship of gods like Kali, Ayyappan and Vettakkorumakan. The artists are members of communities like Kurups, Theyyam padi Nambiars, Theeyadi Nambiars and Theeyadi Unnis. Traditionally, Kurups are in-charge of Kalamezhuthu. The Velichapad is a priest who is believed to be possessed by the divine spirit. He plays an important role in the Kalamezhuthu. On the day of the offering, the venue is set up by the Kurups by making the Koora (roof), for the Kalam (drawing) and Pattu (song). After this the Kalam is done, starting in the afternoon.

Description of the painting

The canvas of the artist is the floor and he usually makes use of only five colors. The scale of the painting ranges from 3-5 meters, making it neither miniature nor gigantic. The work is done with bare hands, without the use of tools. It takes more than two hours to finish the painting. The work starts from the centre and moves outwards. The design is either two dimensional or three dimensional. Above the kalam, decorations such as canopy of palm fronds, garlands of red hibiscus flowers and ocimum leaves (tulasi) are hung. Lighted ball metals are placed on the four corners of the drawing. The patterns of the painting vary depending on the occasion and not on the artist’s choice. It is interesting to note that the expression of the figures depict anger and intense emotions. The deities depicted in the art form are Goddess Bhadrakali, Lord Ayyappa, and the serpent god Naga Devata.

The Lalit Kala Akademi organizes the Kamalezhuthu Festival that gives people a taste of the art form as well as the performance associated with it to highlight the roots of fine arts and aesthetic sensibilities of Kerala.

This article is written by Ananya Mahir and content research was done by Kaavya Lakshman. Originally published on www.nazariya.in.

Zen and the art of Chinese paper cutting