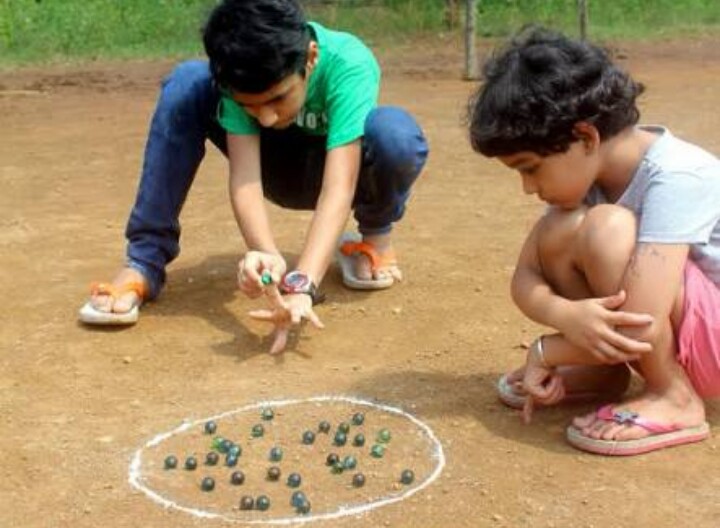 Living in the buzz of Delhi, where people are very busy in their own lives. It’s difficult to find kids play traditional games. The games probably me or my parents used to play in our childhood.

Few days back I found small kids playing a special game. And all the memories of me playing that game came in front of my eyes. The game’s name is ” Kanche “. Kanche is a Hindi word for marbles. As the name suggests the main ingredient for this game is kanche or the marbles.

This game is played just like carrom board game. Kids with different coloured kanche will try to hit each other’s kanche . The one who hits others kanche with his own will earn other persons kanche in return. The game can be played between any number of people.

In a 2 player game. The kanche of both the players will be placed at the center just like in carrom board game. Then each player will try to hit other person’s kanche from a distance. If the player manages to hit the kanche of other players he has his rights over them. The kanche is held on the index finger and pushed towards the other kanche with the help of the other hand.
This is how this game is played.

This game might sound like a mixture of chess and carrom. In both the games you sort of try to get each other’s precious owned game objects.

It’s a great fun to play this games.
Thinking of how and where to get these kanche’s or marbles. Well, I used to get them from the old traditional soda bottles, where kanche was used to keep things sealed.

“Sometimes in April” – A reminder of Rwandan dark past to future generations.