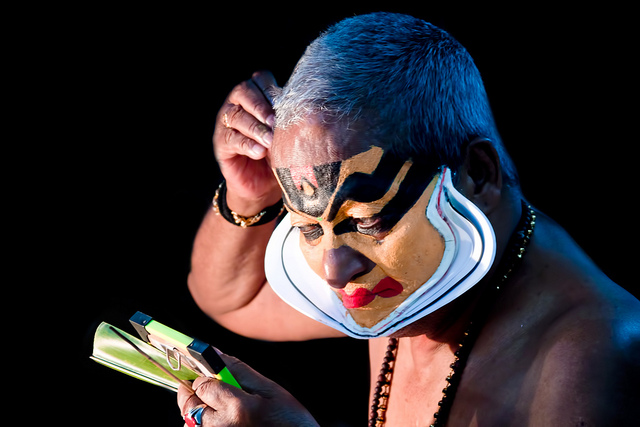 Very recently I bagged an opportunity to travel to Kerala ‘god’s own country’ on a family trip. Remembering a quote someone once told me ,’ it’s different to see something once than to hear about it a thousand times “. I had heard amazing things about the performing arts of Kerala. I was most fascinated by the folk dances Padayani and Kathakali . the brilliant choreographies , the organic makeup, colorful attires and the traditional music. Kathakaḷi –  is a stylized classical Indian dance-drama or storytelling where katha means story . noted for the attractive make-up of characters, elaborate costumes, detailed gestures and well-defined body movements presented in tune with the anchor playback music and complementary percussion.

Traditionally, a Kathakali performance is usually conducted at night and ends in early morning. In an old part of the city of Kochi, past a store and a restaurant to the small, wooden theater. The theater is a small comfy place that can accommodate about 100 guests. we were one of the lucky few . the performance begin with the artists revealing the  techniques of using traditional makeup , it was a performance in its own . They mixed the powder with coconut oil into a paste, and red pain appeared.  A yellow rock was used for yellow paint.  The green paint was made from indigo leaves and the yellow rock powder mixed together.  The artist slowly, carefully applied it with a stick. Each colour had an emotion attached to it, the red for evil character, the green for the hero. Beards and whiskers were paper cut outs applied with a vegetable glue.  The actor laid on his back as another artist sat cross legged at his head.  The artist painstakingly  glued the multi-layered paper beard onto the actor’s face. .To make red, angry eyes, the actor playing the evil beast placed a seed in his eyes for several minutes which stained his eyeballs.

The whole process took an hour. Then the performer explained the method of acting in the Kathakali. He sat at the centre of the stage and demonstrated emotions only using his facial expressions and eyes. Later he familiarized us with the hand gestures and dance steps each of which had a particular meaning  used to tell the story..  The percussion instruments used are chenda, maddalam and edakka. the lead singer is called “ponnani” and his follower is called “singidi”.

The play began with the and the singer singing the story in Malayalam. it was called the “Baka Vadham” or “The Killing of Baka”. The prince (in green face), Bhima, had been summoned by a villager, Brahmin (yellow face),  because an evil, murderous forest-dwelling demon (red face), Baka, who was had taken control of the village.  The first act involved Bhima and Brahmin discussing the scourge of Baka and Bhima’s promise to kill the beast.The second act involved Bhima killing Baka. The evil beast was the only one to use his voice, making ugly cries and grunts.Baka fell toward the floor, gave his final grunt.  It was time for the final curtain.  The curtain was a blanket held up by two men in front of the actors.  It was, after all, a small theater. I thoroughly enjoyed the performance.  We wouldn’t have seen the performance had I not read the book.  To see the efforts that they put in to keep this .

Later on during the trip , I got to stay on a houseboat for an entire day and played on the beach for many more . kochi , kerala