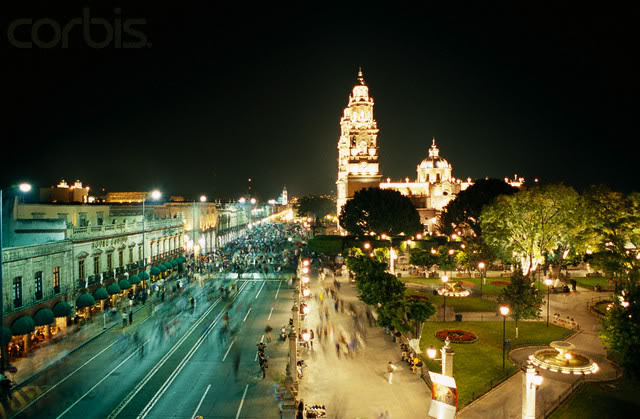 A beautiful city in the Guayangareo Valley, Morelia is the capital of the state of Michoacan in central Mexico. It is considered to be one of the most significant colonial cities. Built in the 16th century, Morelia is an outstanding example of urban planning which combines the ideas of the Spanish Renaissance with the Mesoamerican experience. Well-adapted to the slopes of the hill site, its streets still follow the original layout. Morelia was also the birthplace of several important personalities of independent Mexico and has played a major role in the country’s history. Today the city stands tall and proud as a UNESCO World Heritage Site renowned for its artistic beauty and extravagance.

Back Into the Past:   Human settlements in the Guayangareo Valley in which Morelia is located have been dated back as far as the 7th century. The Spanish pushed into the Guayangareo Valley between 1525 and 1526, headed by Gonzalo Gómez. In the 1530s, the area was evangelized by Franciscans such as Juan de San Miguel and Antonio de Lisboa. What would become the city of Morelia was founded by Viceroy Antonio de Mendoza in 1541, who first named it Nueva Ciudad de Mechuacan (New City of Michoacán). Because of the power struggle between Antonio de Mendoza and Vasco de Quiroga, each fought to gain the ‘capital status’ for the new city and the rival settlement Pátzcuaro respectively.  The new city’s name soon changed to Valladolid and it gained the city status from Charles V in 1545. With Quiroga’s death in 1565,both political and religious authority was transferred to the city of Valladolid, further facilitating the city’s stature. At the end of the colonial period, Valladolid was a small city with about 20,000 inhabitants. It was also an educational center with four important schools such as the College of San Nicolás. These schools would turn out scholars such as Miguel Hidalgo y Costilla and José María Morelos y Pavón, who were sympathetic to the new republican ideas coming out of post-revolution France and United States. After much struggle, the people of Michoacan gained independence from the alien masters and in 1828, the newly created state of Michoacán changed the name of the city from Valladolid to Morelia, in honor of José María Morelos y Pavón. Till date the city’s official name remains the same, although it has been given many nicknames like City of Pink (Cantera) Stone, the City of Open Doors, The Rose of the Winds, The Garden of New Spain and religiously as Morelia of the Sacred Heart of Jesus.

Climatic Conditions:    Morelia, standing at an altitude of around 1,980 meters (6,500feet), enjoys year-round, warm and dry weather. The climate is spring-like and thus ideal for taking part in a variety of outdoor activities and for taking in the local culture, architecture and scenery. Average monthly temperature falls between 14 to 22 degrees, with a maximum of 38.5 degree C in early summers.  Most Precipitation falls during the rainy season that lasts from April to September.  As with most monsoon areas, rains tend to be fierce and brief in the late afternoon, leaving the evenings dry and cooled off. Winters are here chilly enough to adorn warm clothes.

What to Buy in Morelia?You can buy good quality, locally made and hand-crafted Mexican craftwork in and around Morelia and the surrounding towns and villages. The Mercado de Artesanias features craft works from almost every main town and village in the state: each town/village specialises in a certain type of craft. The market provides you with a convenient opportunity to buy genuine crafts made in the surrounding towns and villages. Don’t miss the opportunity to buy some traditional Mexican confectionery which is a specialty in this state (Michoacan) – and sold all over the Mexico. Two sweets which you should definitely try are: Chongos (made from milk, honey and cinnamon) and Ates, which are made from fruit paste. You can buy the local confectionery from market stalls, shops and other trading outlets all around this area.

The Breathtaking Heritage:     The Historic Centre of Morelia contains 249 historic buildings, all made out of characteristic pink stone. The town started out in 1537 with a Franciscan monastery, and has played an important part in various stages of Mexican history since. The architecture of the city is breath taking and makes a visitor truly fall in love with the place. Out of all the structures in the Historic Centre of Morelia, an impressive pink stone cathedral dominates the main plaza, which is surrounded by beautiful colonial buildings. The cathedral is said to have taken over 100 years to build and is one of the finest in all of Mexico. The cathedral’s twin towers, large organ and sculpture of the Crucifixion are worth a visit. Another prominent architectural features is the El Acueducto (the aqueduct), which is an artificial channel that brings water from one location to another. Morelia’s aqueduct runs along dozens of colonial arches that stretch for over a mile across the city. You’ll have to travel under at least one of the arches while you’re in town, so you can’t miss it. Other important tourist spots include Palacio de Gobierno (Government Palace), which is about a block east of the cathedral, and today boasts fine murals that tell the history of Michoacan and Mexico. The Colegio de San Nicolas de Hidalgo, which is between Palacio Clavijero and the cathedral, hosts a statue of Miguel Hidalgo, one of the heroes of Mexican independence, amid a beautiful courtyard. Likewise the Plaza of Weapons or of the Martyrs is a beautiful plaza that was designed and built by the Spanish between 1541 and 1546 to outline the future city of Valladolid. Its attractive kiosk dates from 1887.Morelos House where Jose Maria Morelos y Pavon lived has been today turned into a lovely museum containing paintings, photographs, fumitory, period pieces, and copies of documents that help to illustrate the life of Morelos prior to this becoming a leader of the Independence movement.

A Quest to Discover Quito..

The Cathedral of St James in Sibenik