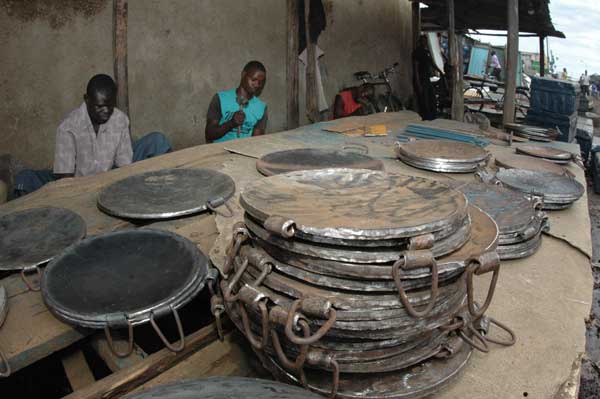 Jua Kali which is Swahili for ‘Hot/ Fierce Sun’  refers to small businesses or artisanship that takes place either in temporary shelters/ kiosks or in the open under the scorching equatorial sun.  The term is also used to refer to a person, businessman that can undoubtedly do anything upon request. Jua Kali is generally grouped under the informal sector of Kenya. 90% of Jua Kali is service industry: from masonry, to basketry, carpentry, pottery, blacksmithing, beaded jewellery making and even wood carving. Most of these work is done by hand or using traditional tools.

Jua Kali artisans are mostly found on the roadsides of  Kenya’s big towns. They produce a variety of high quality hard and soft wood furniture, artistic fabricated doors and gates, priceless pieces of art created from scrap metal, carpets and custom made items. Other popular Jua Kali products include household items like frying pans, cooking pots, metal boxes, paraffin lamps, energy saving baking ovens, metal stoves that use charcoal ‘jiko’, metal tanks and so forth. Some of these art works are at times destined for export markets and earn Kenya foreign exchange. The products from this sector are of good quality so much that they sell in any part of the world.

Jua Kali trade follows the system of apprenticeship. The traditional craftsmanship is passed down from one generation to another through on-job training and mentorship. This industry creates job security for many families as it removes reliance on the elusive dream of getting white collar jobs. Most people join the industry after completing high school.  Through this industry many have been able to achieve the Kenyan dream of financial independence.

The reality is that the Jua Kali industry has become an integral part of Kenya’s economy. It is no longer a marginal activity patronized by the poor and the underclass. It is now fully embraced by many educated men and women have ventured into it, and there are countless reports of enterprising men and women who have thrived and even become rich in this sector.

Meet Gaurang Shah: The man who is reinventing the Saree

Why poetry of Kantha embroidery needs a revival