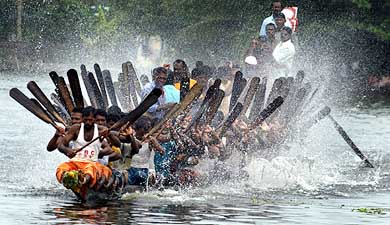 I happen to witness an excellent example where hundred minds and hundred pairs of hands harmonize towards one goal. I was simply amazed by the excellent team spirit, and integration of the people of this backwater country and it was a great occasion for excitement. This is the highlight of the onam festival in August /september in kerela.

I learnt how to row a boat , to identify north direction when surrounded by water and to direct the course of the boat.

The battling snake boats of Kerala have over 400 years of history associated with them. Their story can be traced back to the kings of Alleppey (Alappuzha) and the surrounding areas, who used to fight with each other in boats along the canals. Snake Boat Race and is a major tourist attraction.

These boats are named as per their shapes, sizes and purposes. The Race Boats “churulan vallams” are boats having a capacity to acommodate about 100 people .The ends of these types of boats are shaped as a Circular ring.The Chundaanvallam is so called because of its pointed prow. The term snake boat indicates the shape of the stern which resembles the raised hood of a snake. The stern is majestically caparisoned and decorated with a flag and brass ornaments. . There will be 95 oarsman, 5 Controllers and 10 ‘Nilakkar’ (persons supposed to enhance the vigour and enthusiasm of the participating oarsman).

The trophy named ‘NEHRU TROPHY’ is awarded to the winner of the boat race.The trophy is a replica of a snake-boat in silver, placed on wooden abacus .

When is it held –
Nehru Trophy Boat Race is always held on the second Saturday of August and is held on Alleppey’s Punnamda Lake near Alappuzha, Kerala, India.

How to get there-
The closest airport to Alleppey is in Kochi, 85 kilometers (53 miles) away.

Vibibi: The Swahili cuisine that evokes a communal feeling